My Pendles received a Rogue Commander Pack at lvl 10

Characters get bonus packs when reaching certain levels. I doubt it’s a glitch

Most likely a glitch. (Don’t tell anyone though.)

I also received a rouge pack at lvl 10. Got a legendary out of it. I’m sure its not a glitch

Mhhh, I thought you get comander packs every 5 character levels, between come titles, skins & mutations.
I could be in error, but I´m very very sure I got a pack for S&A´s 10th level as well.

You always recieve a [Faction here] Commander pack at lv 10 for any character. Since Pendles is a rogue character you then receive a Rogue Commander Pack. The commander packs have a higher chance of giving taunts and skins but can only be received from leveling up. Don’t get confused with the regular faction packs.

You get regular loot packs at lvl 10, not commander packs.

That’s why I made this thread.

Also, commander packs give a guaranteed skin, not a chance for one.

Its not a glitch. I believe any time you hit lvl ten with a character you get a loot pack of thier type. (rouge, attacker, ect)

So just hit lvl ten with ambra. Got a loot pack.

Not true because I got a LLC commander pack and didn’t recieve a skin or a taunt. It only gave me 2 green items so it’s only a CHANCE AT a taunt or skin. Also they changed the name for it, yes it use to be just a regular rogue pack but now it’s a Rogue commander pack.

Also they changed the name for it, yes it use to be just a regular rogue pack but now it’s a Rogue commander pack.

There are Faction packs (Rogue Pack, Jennerit Pack etc) that have a chance at handing out a skin/taunt. Then there are the Commander Packs that should be a guaranteed skin/taunt.

No name change, they are 2 different things.

For those that are struggling in this thread: 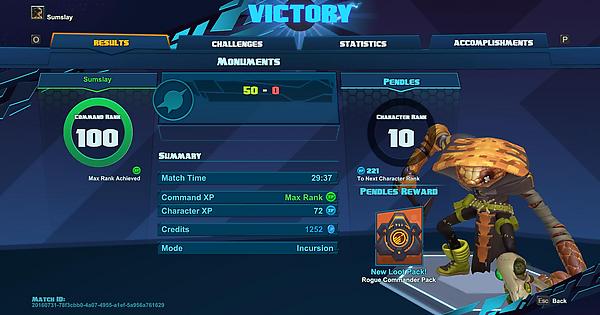 That’s what I meant…also it’s not guaranteed a skin/taunt because I got a LLC commander pack for Marquis and didn’t get a taunt or a skin which is why i said before that it’s A CHANCE to receive one.

To sum up : I said that there are 2 different types of packs, the regular and the commander ones. Back then you would recieve a pack for leveling up but it was just called a Rogue pack which was later changed into a Rogue Commander pack.

@Sumslay hmm strange, I got a LLC Commander pack for marquis instead of just a regular LLC pack. Also the ones you get from leveling up had a bigger description so maybe the commander pack is not a glitch but the people receiving the regular packs is?

EDIT : It’s not just for the rogues and LLC if you go to http://lowlidev.com.au/battleborn/# you can see that people also received items from Commander packs for each faction. Pretty sure the commander packs are intended and not a bug.

Did you get credits instead?

No, only got 2 green items. Was a bit surprise because i was expecting a taunt or a skin.

Yeah, this is definitely a mistake. I wish it was this way for all characters.