NESteampunk controller! (and other Steampunk builds)

Whats up everyone on Ye Ol’ Interwebs!

So I am a pretty big fan of everything Steampunk and the whole lore of the Steampunk movement.
I have recently gone through a divorce and lost my house in the process, My Woodshop was set up in the basement of said house so all my machines have been in storage for the past year and a half. With this being said I have not been able to build anything lately.

The other day I got really depressed and had to build something so I drove down to A.C Moore and pick up some new supplies. And when I got home the first thing I saw was one of my NES controllers. (I was playing Mario brother 3 earlier that day) So one thing lead to another and I started ripping it apart.

Long story short four hours and six beers later I was left with this. 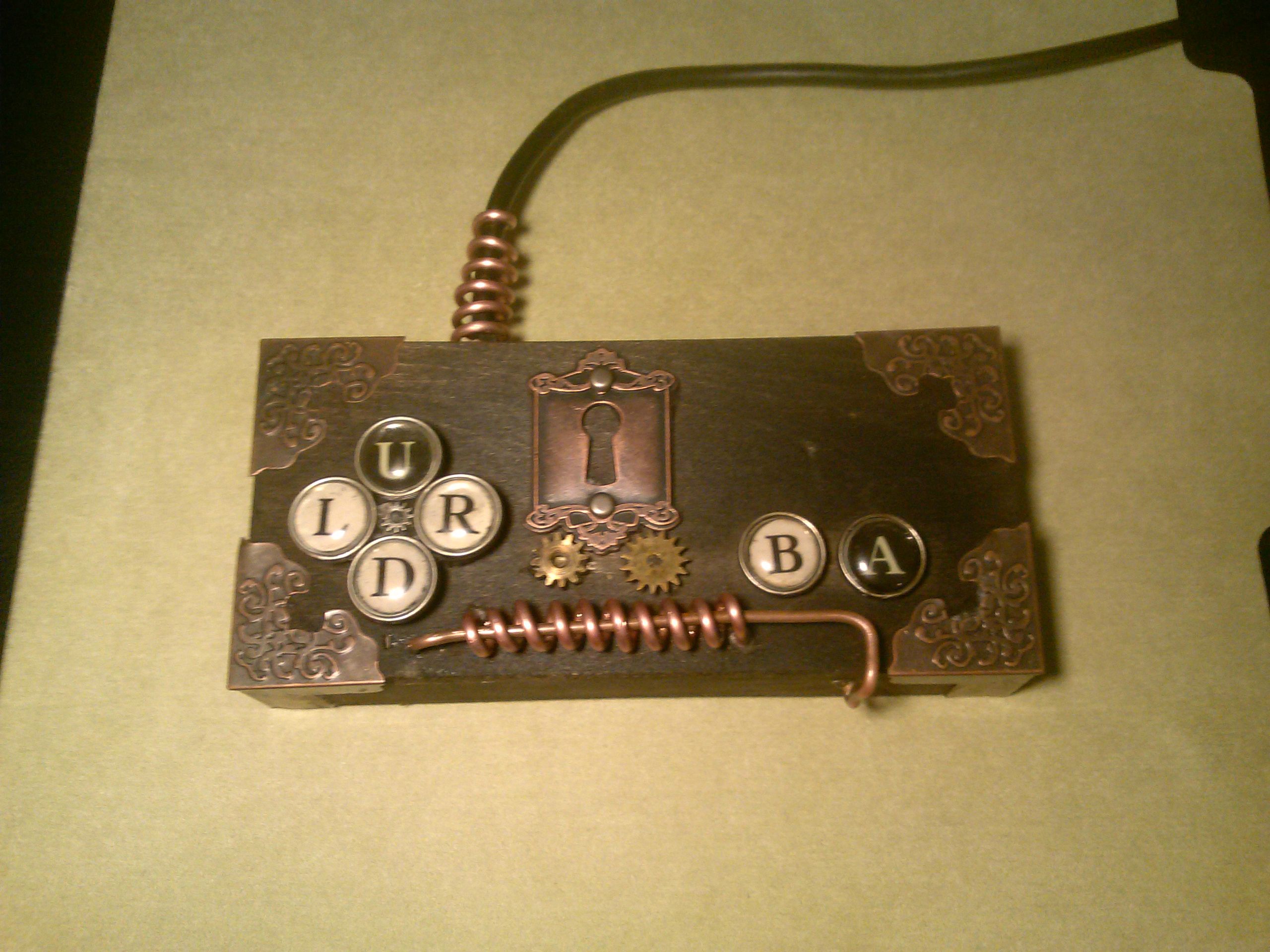 These Gearbox forums always felt really comfortable to me like a second (cyber) home and I love being apart of these forums and interacting with the people on here so it only felt natural to share this with you guys.
That is the finished NESteampunk Controller. If you guys are more interested in it I did upload some of the Pictures of the build on my Imur. Along with my Steampunk Blog.

I also made a video about the build if anyone wanted to check that out.

Hope you guys like it if so let me know and I’ll keep updated this thread with more of my future builds.

Now you need the entire NES to fit the athestic

LOL I know it!

ONly problem is I only own one of those and if it comes out looking like crap I ruined my only one.
I might take a trip up to game exchange to see about buying a new NES to “Steampunk” that one. I think they are only about $30 there

Duuuuuude that is sick! You sure are talented, mister.

I’m really glad to see everyone really likes it.
I’ll have updated the thread with my next builds too I guess.

I look at the lock and think… hrrrm is that how you activate your cheat codes. Turn the lock and BAAAAM! HACKS!

I look at the lock and think… hrrrm is that how you activate your cheat codes. Turn the lock and BAAAAM! HACKS!

XD Dude if I could figure out a way to make my Game Genie work off a turn of a key I would totally do that!!!

These here are my next project!
Not completely sure of what it is I’m going to do to them yet but, I usually just wing it and see what happens. About a year ago I was going to do some type of build with these and I started by pulling all the glass out of them and installing four red LED’s into the bottom of each one. So that is done so far I did pick up some pie cabinet door type punched sheet metal from Home Cheapo so I think I’m going to do something with that and maybe some Jacobean stain wood somewhere. Ulso just picked up some more Rub n’ Buff from the craft store. So I have a lot of options to go with.

I’ll update when there is more progress made on these if you guys are still interested in this.

EDIT: Oh yeah HERE!!! is a link to the blog post from Nov 2013 about the tea light lanterns and the little bit of work I did to them already. If you wanted to check it out.

So I have been working on my tea light lanterns a bit and got a good amount of work done to them.

I got them all brassy-ed up with some rub n’ buff and cut little pieces of wood to fill the top holes. Stained the wood with some minwax Jacobean stain and stuck them in place. Then I cut out squares of the pie Cabinet door like punched metal to fit inside of the big openings on the bottom of the lanterns and installed those into place. I think they look pretty cool so far now I just have to figure out a good way to wire them up to a timer and find a good looking place for them to hang from some soon to be built hanger.

Hope you guys like it again if you guys do like the builds I will keep update the thread with more of my little projects.

This is what they look like in the dark but the picture really doesn’t do them much justice. Alright well I’m not sure how many people have been following this at all but I figured I would update you guys anyways.
Just incase a few of your guys are checking this out and waiting for something new.
I found some metal plant hangers at walmart. I got them all antique-ish looking with again some Rub N’ Buff and other paints.And hung my Tea light lanterns off of my computer screen, Wired them all up so they glow red at night time.
I think they look great the only thing is now I know I have to rip my computer monitor (TV) apart and SteamPunk that.
But that is another build for another time. Soon though hopefully very soon.

The LED’s do not glow as much as I would like them to still so I’m thinking of get some of the RGB LED stripes that are controlled by remote to put in these bad boys this way I can change the color of them at the push of a button as well.

At any rate here are a few more pictures of the Lanterns in there finally resting place. Hope you guys enjoy my builds.

Sorry for the mess! XD arg!! Life Am I right? 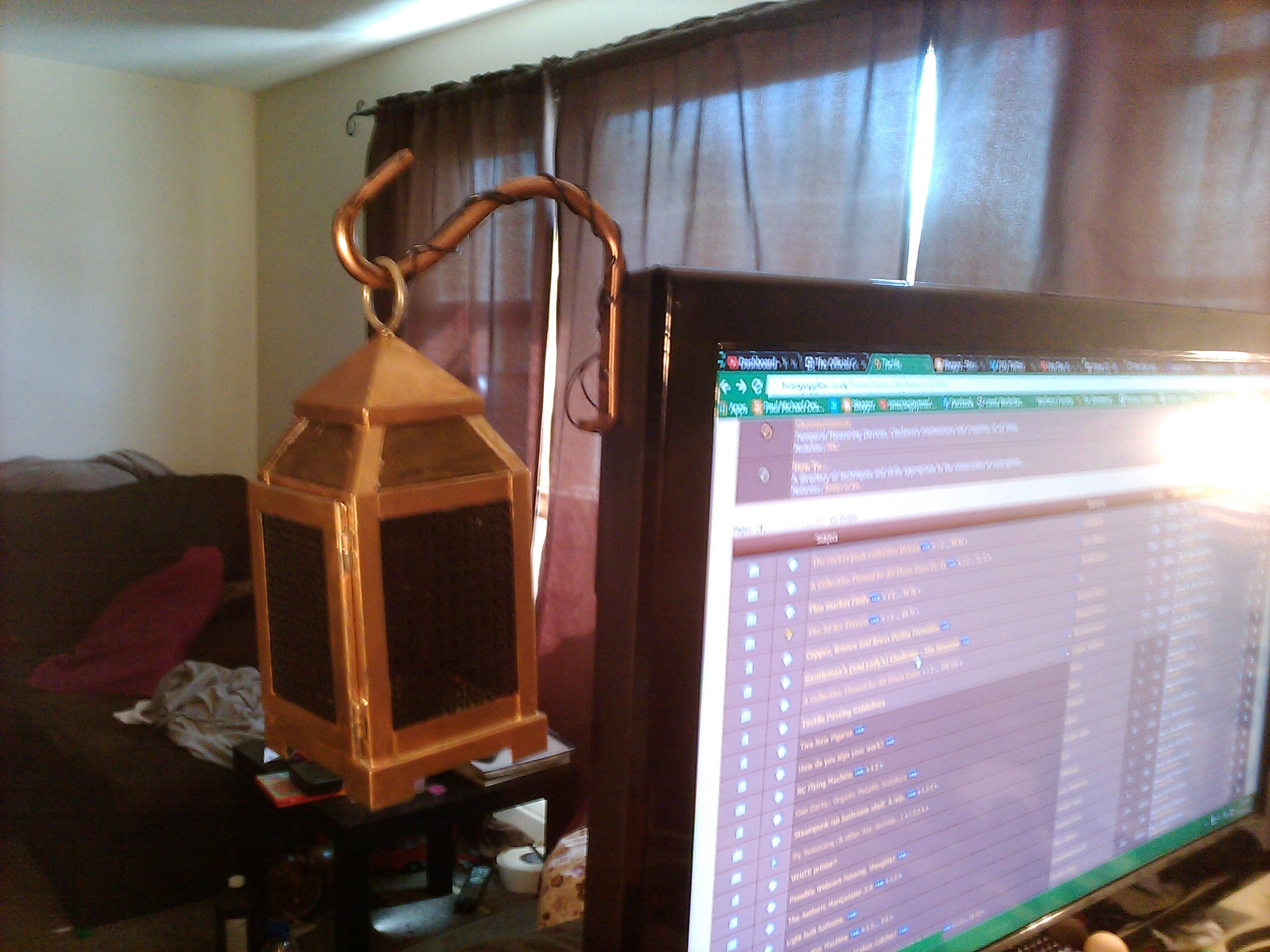 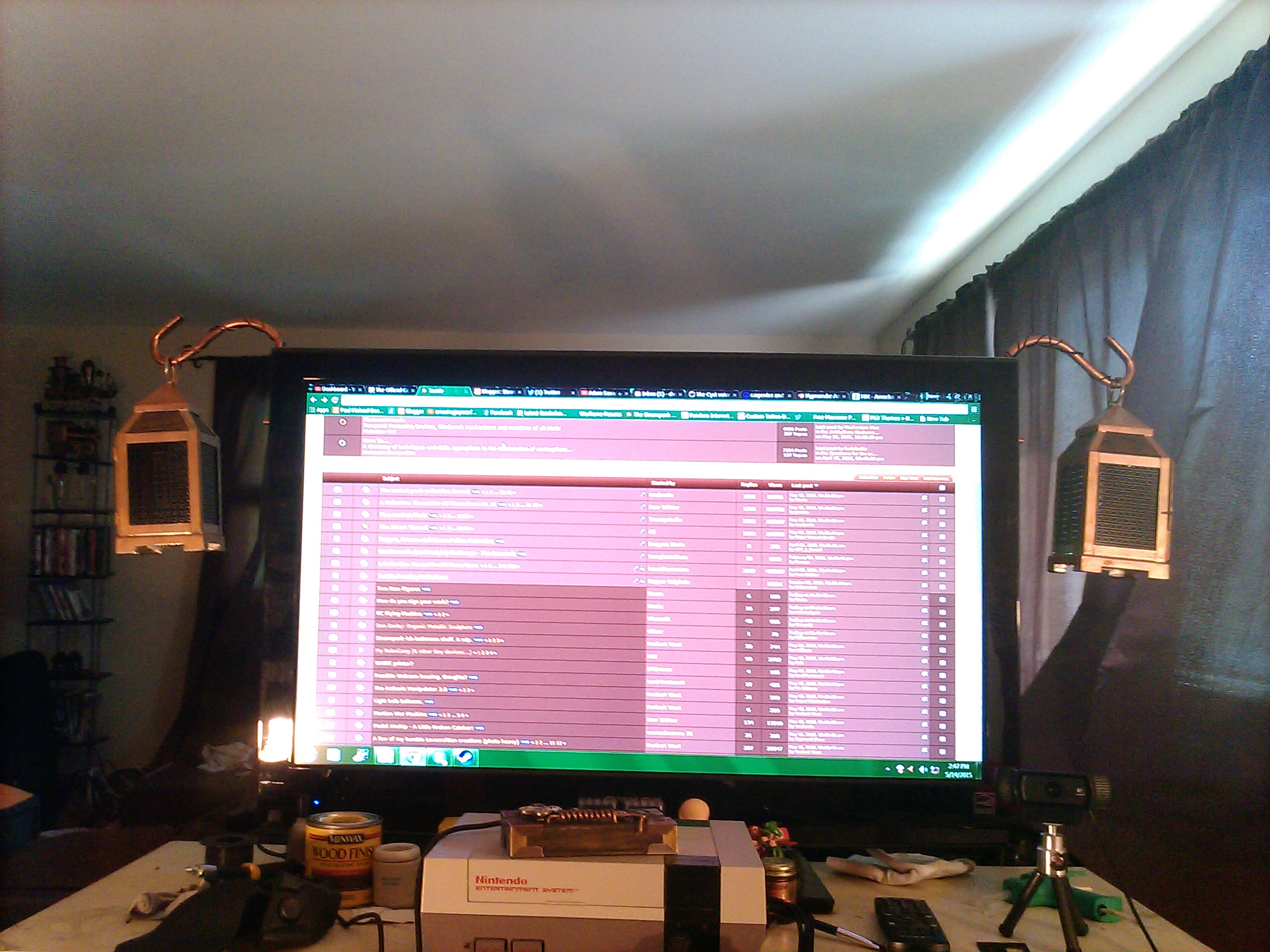 Again hope you guys enjoy the pictures and if you want to check out more details of the build you can read my long winded and poor grammar posts on My Blog HERE!!

Thanks again for all the kind word guys it really is the reason I love these forums out of anywhere else on Ye Ol’ Interwebs.

Thanks kitty glad you like it.
I have a few more builds in the works but they are going to take a little while to get done.
I’ll be sure to update the thread with them when they are completed.

I haven’t done a whole lot of steampunk builds lately.
However I did just buy a new condenser microphone and I mounted it on top of an antique floor lamp.
The microphone looked kind of off when it was all black and the mic stand was an antique lamp made of brassy bits and what not.

I got a little bored today and did a quick five minute rub-n-buff paint job on it I think it came out pretty cool so I figured I would post it for you guys to check out.

This is the microphone and bump stand before I did anything to it.

After I did my Five minute Rub-N-Buff paint job to it they looked like this!

And then I just mounted it back on the floor lamp

I think It came out pretty cool what do you guys think?

I love your remote controller. The rest not so much.