I’ve never really gotten the handle for Mellka, as I’m sure a lot of people haven’t, and unless this is reverted, never will.

Welcome to the forums!

ES is heart broken and only a good well versed read might help.

Let’s all pen s few words out of respect.

It’s not all that strange. I at least completely understand. I simply watched for a month or longer before making a profile, and it took longer to coax a like out of me. I first began making little replies here and there when I saw a factual error, mostly because I admired those who did the same. Like Kaleidodemon, who was very active before some other things took off. I really recommend joining in the conversation as often as possible, as it’s changed the game for me, and I know a lot of great people.

I’m sure I’m next. They seem to have a pedigree for nuking someone with a nerf when they actually need a buff.

I’m sure I’m next. They seem to have a pedigree for nuking someone with a nerf when they actually need a buff.

I actually expect him to become an aiming Benedict type nightmare. Overbuffed

I’m surprised at the reception and recognition this nerf has gotten, I don’t see why it has gotten the attention it’s gotten to be honest.

She may be one of my mains and I’m not happy about the change, but it’s far from devastating. It’s a considerable nerf to her sustained damage, but she’ll still be able to hurt. The difference between Mellka and El Dragõn is that Mellka still maintains all of her survivability and her kit remains unchanged.
The “only” thing this does is make her more of an harasser rather than an assassin.

I will say though, that given the reaponse over at the Battleplan, it’s weird this change got pushed before the rest of her overall changes to make for more combo builds which builds upon venom.

They better not touch Rath! No buff or nerf needed. Leave him just like how he is!

I’m sorry for your loss.

I hardly think @EdenSophia sees it that way. There’s a lot more to a character than simply playing them competitively. I cannot put into words the kind of love she has for Mellka (I’m sure she’d tell you herself if she wasn’t so geared up for this update!!), and no amount of balancing is going to change that…Except maybe make her a little salty. 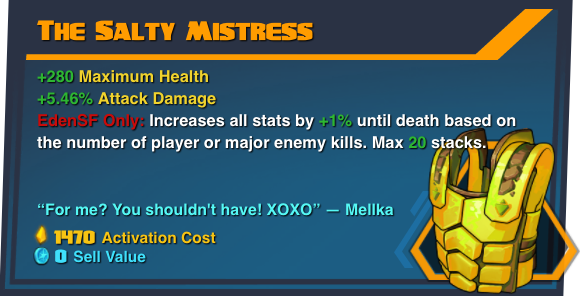 I just really, really hope that the melee buff justifies this. Of course, we won’t know until after the update; followed by player attempts to make a new, and viable build based on these changes.

Hey mate. Would you mind editing the title so it would be easy for new users to understand what the topic is about?

You’re welcome to keep the Dear Eden bit, but we do not want it to sound like a PM gone awry.

But at that point, she doesn’t fit in. Alot of her skills use venom, and the dps of it is now 66% worse. Not to mention that Caldy and Pendals are straight up better harassers, especailly when you look at what these numbers mean and the reason. “Venoms picked to much” ITS A BLOODY PASSIVE. As for the damage increase on claw is up to claldarius alt fire damage, and HE JUST GOT BUFFED. Thats the problem.

Well, she has stated that the Air stall is a make or break for Eden. So yeah, she will stay to GBX regretably pulls air stall

So… next update then?

For the first time in my life, I can say that I have something in common with Attikus: difficulty expressing myself.

She may be one of my mains and I’m not happy about the change, but it’s far from devastating … Mellka still maintains all of her survivability and her kit remains unchanged.

You’re underestimating it, I’m afraid. Venom was the bulk of her wave clear, and this is a big nerf to Spike overall (by way of Parting Gift), so it’s not true at all that her kit is unchanged.

Her survivability plummets if she attempts to melee, because her melee string is grounded-only (unless she bounces and uses the elbow, which is quick melee levels of DPS). So she won’t be air stalling or bunny hopping, and you know how quickly Mellka goes down when she stops moving. She also opens herself up to CC in a way she ordinarily never would.

Finally, I’ve seen for myself that few Mellka players keep the regular canister and use it well. Much of my own success was owed to the fact that I am a good shot with a canister and I make sure to keep venom on any target in my sight. Many Mellka don’t do this, and these are the ones who won’t quite grasp why this is such a nerf. For those like me, our killing potential just got pulled out from beneath us.

That, and the fact that Refined Canisters is now a shadow of itself.

I think that was kind of the point. They said she was over performing and are changing her. Apparently she’s to have no wave clear and only harass not kill

They said she was over performing and are changing her. A

They also said that this was to encourage her to stay in close range, but the Mellka players that are racking up high kill counts (like me) were already there - her DPS from bouncing and shooting long-range canisters was already pitifully low. Thing is, Mellka moves in and out of her effective range so quickly that some people seem not to understand where the damage is coming from. It’s not because I’m out of reach lobbing a canister that my target is almost dead. It’s because they let me flank them for ten seconds while hitting their crit spot, and because I also venomed them as I was approaching, and then again on initiating…