New run or level up

Hello jus trying to see if anyone still plays on ps4 i have 2 characters. Level 66 Sal i would like to get to 72 to get some good weapons ive seen that you need multiple players to get pearls and etc. and i started a mew charaxter zero level 7. Dont mind working on either one. Just would like atleast 1 person to do some runs woth me to get some good weapons you cant get on solo. I play alot so ill be on quite often. Ps im not a pro still learning tricks and stuff lol.

Really? Is there a certain place to farm because i only have 1 and someone helped me get that it was very random too. Havent seen any but idk if thats because im level 66 or not.

What weapons are you using now?

I’m usually available to mob through the game. PSN thatguysh4rk

Unkempt harolds lol. Thats the only strong guns i have. Anythinf else really do t work for me too much.

Until you learn the mechanics of the game better, going with a Grog/Harold combo with Sal is a great choice, despite the derision it earns as “easy mode”. It’s not like you are using a Pimpernel/Ahab and avoiding actually playing the game. Have you gotten a Legendary Gunzerker mod to drop? That’s probably the most useful one for you learning the character at those levels. A legendary Hoarder can be useful too, but I’d avoid the Leg Beserker (lousy overall imho) and the Leg Titan (good, but you have to know your Sal setups with the right skill tree filled up, as opposed to standard Sal setups with the left and middle trees).

The grog/Harold combo really helped me get my feet with Sal in UVHM and then I learned how to play him with other weapon combos. Hopefully, Sun got you out an invite to the PS4 community group and we can answer questions about setups here on the forums. There’s a lot of knowledgeable Sal players on these forums, though I’m not one of them (Maya is my main, followed by Krieg with a little Zero sprinkled in).

Having more players in the game spawns more enemies and increases the likelihood of spawning higher ranked enemies (badasses, super badasses etc.). More enemies and more higher ranked enemies means more chances for better gear drops, like Pearls. However, the drop chances themselves don’t change with more players, so other than spawning Vermivorous (technically possible solo, but in practice your odds are terrible and it’s not worth it imho), you can get everything solo. Tier 2 pearls and class mods can only drop from Tubbies, however, and so their loot pool is bloated and your odds of getting what you want are low. It does seem like the game weights your class mod drops in favour of the character you are playing, but that could just be confirmation bias on my part (seems like I’m more likely to get a tier 2 class mod for the character I’m playing than a random one). I have no stats to back that up and not a large enough sample size out of my own experience.

In addition to a Grog in your offhand, you can look for a Lady Fist from the side quest as the 800% crit bonus will carry over to your right hand weapon. 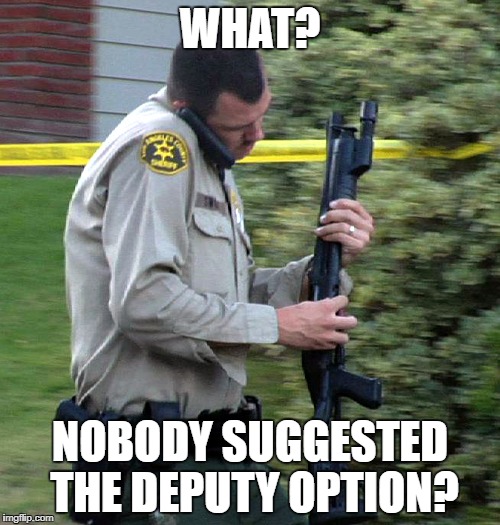 Lol what the sheriff’s badge?

Hello everyone! I would like to take a few lines to thank those who’s input has helped shape this build into what it is today. So many thanks to: @itothemagine, @Sljm @akdere1, @Ganza, @Afro_Samurai, Imit8m3, @BookEmDano, @Kurtdawg13, @Jefe, Poisoned, @Jimmy_cornflower, Grimw, Theweird, SirPatman, Relix28, Umcio, Dotanuki, Speed Demon, Holyslitbatman and many others. Thank you all! :blush: (Damn forum only lets me tag 10 people…) This build is designed to let you do massive money shots in…

For leveling from 66 to 72, a deputy setup is perfect as it’s powerful enough to make your gear last long enough. You can probably just get a good shotgun around level 66-67 and use it through the whole thing.

Sun got you out an invite to the PS4 community group

Not sure where to find a leg class mod thats why i got the vengeful right now. And grenades i jus use the most powerful one i have to my knowledge lol.

And i read that farming the handsome sorcerer gives te best drops. Not sure how accurate but ive been farming him for awhile.

Handsome Sorceror has the same loot pool as the Warrior, the main quality drop is the Conference Call but you’re not likely to get anything else great from him. However, in that level are many chests with could drop you a useful Monk class mod, like a Chaotic Evil Monk or anything with +6 Money Shot.

Your gear is underleveld which is probably why you are struggling a bit. I’d look for an on-level Harold from Torgue farming or Savage Lee. Grog level doesn’t matter of course. If you wanted the Deputy build, there’s a list of useable items there and where to farm them. @Chuck80 is one of the most knowledgeable Sal players around, so definitely read his guides on that build. It works at all levels. I suggest slag grenades and you need something better than that terrible Lightning Bolt anyway. Since you’re at Dragon Keep, if you kill the first two enemies right in front of you when you spawn in, it spawns a Badass wizard that can drop x2 or if you’re lucky, x4 magic missiles. There’s other places to farm those to, but that’s my spot. A slag transfusion, bouncing Betty, or singularity grenade from a world source like the Snowman Chest all work. I like grenades to slag, guns to kill, though with Sal, you can also use singularity grenades as crowd control and use a grog or slagga in the offhand to slag, so maybe it’s less critical to use slag grenades with him.

In terms of getting you that Leg Gunzerker mod, that’s a tough get. I’d look on the Sal forums for normal class mods that are good until you can get one. His most common leg mod, the Leg Beserker just isn’t good unfortunately. You can only get a Leg Gunzerker or Leg Hoarders from Tubbies, which are annoying to spawn and have a big loot pool. That said, behind Ellie’s place in the Dust or Caustic Caverns are good places to farm. If you have a friend, take them, because more players means badasses are more likely to spawn and every time the game spawns a badass, it has a chance of being a Tubby. Therefore, you want to go somewhere that spawns a lot quickly, hence why Spiderants and Varkids are a good tubby source. The True Neutral and Chaotic Evil Monk mods you can get from Tiny Tina are boss killer mods, with the +6 Money Shot, but I don’t think they’re the best for mobbing.

For Shields, I like Adaptive shields for Sal, so the top tier of that list is the Evolution or Neogenator, but I wouldn’t farm for something you’ll outlevel soon anyway, so see if you can get a decent blue or purple adaptive shield as a world drop. The bee is good with him too, as long as you accept it will be down most of the time. I’m a fan of absorb shields in general, but again with Sal, your shield is down so often…that’s why I like Adaptive shields because you still get a boost. I would farm for a Rough Rider at some point, as that will be useful with the Money Shot builds around your CEM or TNM class mods. It drops from Bulwark in the first level of the Hammerlock DLC. I think you have to take that side quest, just look it up on the wiki, it’s not too hard.

Looking to play with players on Ps4!? I’m new played through once but want to start a new acc as mechromancer with people where they can help me out and tell me what’s best… from Australia dont mind through As long speak English and can communicate PSN: Lgndxo_ <3