The time is nigh upon us.

Firstly, bask in this - my co workers team is named the Bill Belich-check it Outs

Secondly, I am currently trying to screw one of my friends on a trade because as a total dick move I picked Tyrod Taylor as my first pick, because he is a fan.

If things go well, by the end of the day I will have carson palmer, giovanni bernard, and odell beckham jr.

That is all for now.

I love football, even if it is rigged. And it is. Make no mistake about that.

How’s it rigged? I definitely think there is favoritism and I’m sure the league does what they can to get the most profitable SB matchups, but anything beyond lenient/strict reffing seems like a stretch. Organizations and players would speak out if it was blatantly rigged.

Y’know, in past years I would have loved to have gotten into it with a ravens fan.

This relationship is feeling a little one sided, brah.

You monster. Leave us beaten down Bills fans alone

You know as well as I do that our organizations don’t stay down for long. What matters is Ravens/Pats history. Don’t get too confident on me; you know what happens when we play and make the playoffs.

On the plus side though this is the most optimistic I’ve been about a Bills QB in while. Still don’t like Rex Ryan at all though

Dude, if anything I’m kind of rooting on tyrod. Im from southwest Virginia (VA). He was the last time Virginia Tech was any good, and he certainly didn’t embarass himself last year.

You guys have a quarterback.

So… I shall torture him.

You know as well as I do that our organizations don’t stay down for long. What matters is Ravens/Pats history. Don’t get too confident on me; you know what happens when we play and make the playoffs

Solid chance we’l see each other this year again too, depending on how garapallo does.

We will hav e a wine and cheese tasting before hand if thats the case.

Cause if it happens, ■■■■■ gonna get real dark real fast.

Dude, if anything I’m kind of rooting on tyrod. Im from southwest Virginia (VA). He was the last time Virginia Tech was any good, and he certainly didn’t embarass himself last year.

You guys have a quarterback.

I watched him in preseason behind Flacco for years and I second this. Tyrod is a great player and I’ll be rooting for him. Bills have a pretty solid defense, too.

Texcan’ts take it all, Tahm Frikkin Brady throws 27 ints, RG3’s knees literally explode (I mean ‘literally’ in the literal sense of the word) and the Jaguars finish last in their division.

I only mean 1 1/2 of these, take your pick.
Expect I’ll end up watching a few games this year but my heart just really isn’t in it anymore

Honest to god, I’ve never been able to figure out why the ravens thought flacco was the better call. Tyrod was young umproven, sure. But… if you’ve seen even one of his highlight reels, you have to think someone on the offensive coaching staff was thinking “uh… this is the shot in the ass we need”. Never happened though. My only regret is that he went to the bills. Not just the bills, but rex ■■■■■■■ ryans bills.

As a pats fan, its a dilemma.

Here’s hoping the Ravens do better this year than last year. Last year was rough.

I’ll have to save the Flacco debate for another day after I finish this drive and make up for a lot of lost sleep. Lol.

@daerksiea: Agreed. I think they’ll rebound, but the division will be tough and our secondary still gives me nightmares. I think we’ll have a wild card secured if we can manage 10-6 or even 9-7. But honestly, I’ll be happy just seeing a full season without so many of our starters going down to injury.

Well right. That’s what I mean. It’s not wrestling, but I think there have been many documented cases of refs divine intervention. In many cases there are too many coincidences to not think something is up. Prime example, last season when the scheduled came out, the Vikings and packers last game was against each other. Everyone was like how crazy would it be if the title game was the last game of the year and the last time they would be at u of m stadium… Naturally it was and I think ild read somewhere is was the most viewed game of the season.

Okay, we need this back up top. First off, that Denver/Carolina game was a great start to the season. I was pullin’ for the Panthers because I think the Ravens are going to need as much help as they can get for wild card seeding (see, I can be reasonable and unbiased at times) and I’m not real big on Denver in general. Even though I wanted Gano to make that final FG, I won 10 bucks betting against it between my brother and I so that’s my only positive takeaway from the whole night.

Carolina was lucky to be in that position in the first place; I think that hands to the face call they got that saved them was bs and Cam’s lucky he got a late hit that negated his intentional grounding, too. Siemian looks like he might develop into a decent QB if he keeps it up. Numbers weren’t great, but his play was a lot better than expected for a first-timer.

Here’s my fantasy lineup with my family and some buddies. Standard scoring in a 9-man league. (Yreah, I know. 10th bailed on us.)

Pretty freakin’ happy with this team, but my season’s success probably rests on Bortles. Strategy was waiting as long as possible on a QB (think 12th round) so I could stack all of that depth. Gonna scavenge the waiver wire every week and play my defenses on matchups.

Panthers @ Broncos / Denver won, but I picked the Panthers. Gonna put my picks in bold.

Carolina was very much a good game. We caught it at a Buffalo Wild Wings after helping a friend move a couch.

Anywho, my fantasy lineup this year is a bit odd-

It’s odd because Taylor was my first roud draft pick. But I told that story already.

My picks for this week-

Raiders @ Saints - Sinners to win it (NO)
Browns @ Eagles - My brain says the birds, but I always pull for cleveland for my brothers sake. GO TURDS.
Vikings @ Titans - Going with the local boys on this one, the vikings seem to be in a bad spot. Go tit-ans.
Chargers @ Chiefs - Considering I apparently have half their team, chiefs. Rivers can go try to sell his chidlren elsewhere.
Bengals @ Jets - ■■■■ the jets, go cats.
Buccaneers @ Falcons - Dirty Birds ad all day.
Bills @ Ravens - The falcons are the only dirty birds I’m rooting for today. Much like the jets, ■■■■ the ravens.
Bears @ Texans - YEEEHAW! VARMITS! MOONSHINE! UNPROTECTED SEX!
Packers @ Jaguars - Seems like an easy win for Aaron Rogers, who I believe suffers from a childhood illness known as “douche face”.
Dolphins @ Seahawks - Hawks. Insert Canned tuna joke.
Lions @ Colts - Colts. Luck is coming off a ■■■■■■ season and I think he’ll be looking to make a statement.
Giants @ Cowboys - I’m torn here, partially because I hate both of these teams so much. I’m really rooting for a meteor to hit the stadium, but whatever. Cowboys. Sure. Why not.
Patriots @ Cardinals - PATS NATION 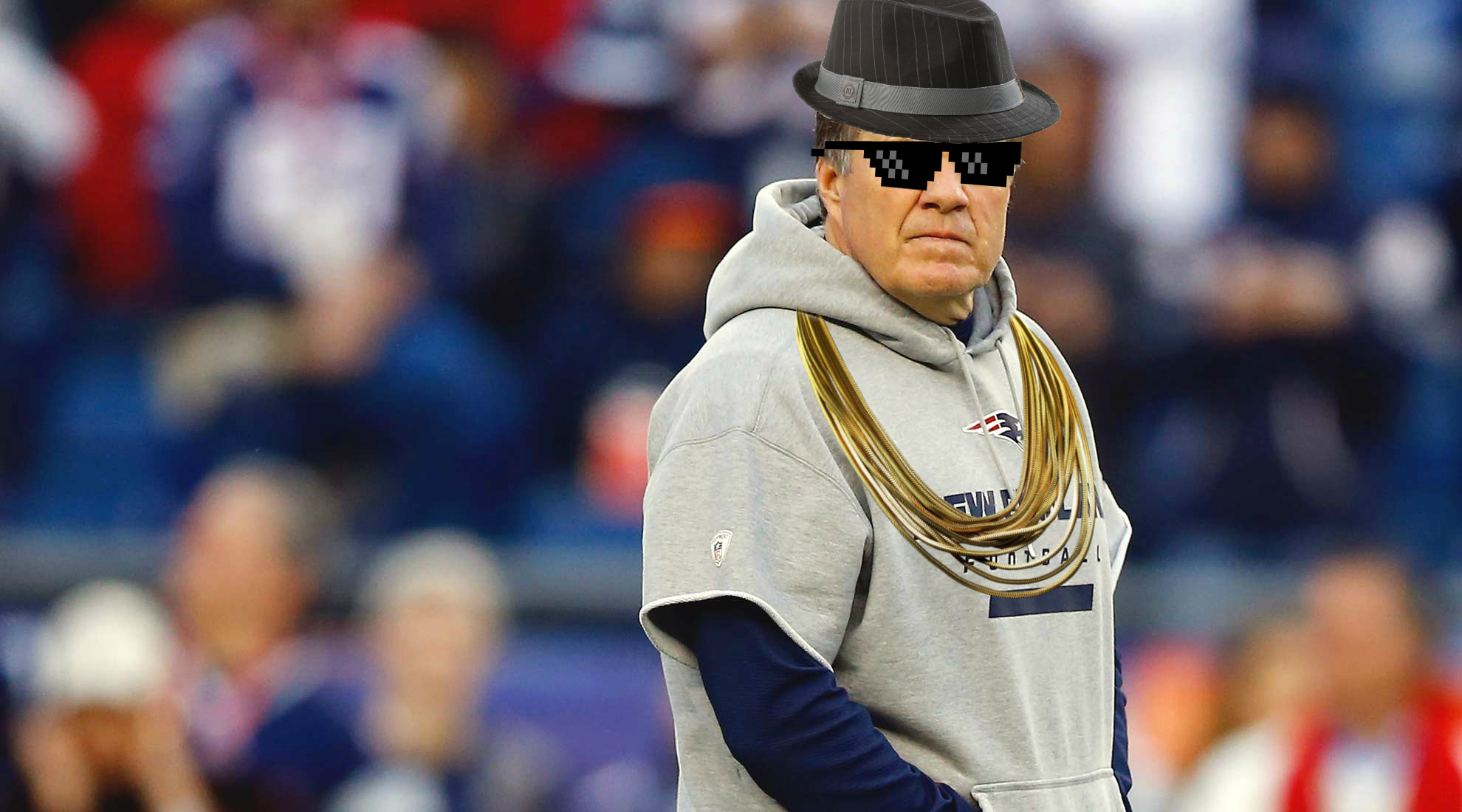 Steelers @ Redskins - Steelers, cause the redskins still suck.
Rams @ Niners - Niners. Location changes are rarely kind to the teams who do them. To start at least.

Woo! Week 1 is here! Can’t wait to see Jared Goff star- oh find me in the alps it’s still Case Keenum… Oh well, hope we at least do something this season instead of going 7-9 every year.

Biggest question of the week for me is whether to start Derek Carr or Eli Manning… Decisions.

So many great games going on right now. Holy hell. Ending of the Raiders/Saints, Jax/GB, and KC/SD games were crazy.