The Flakker is a very situational shotgun that is very effective against large targets AND when you are standing the correct distance from the enemy. When used properly it is a very devastating shotgun but it requires a lot of awareness and timing to pull it off and against smaller enemies it generally does not do a whole lot. It has an incredibly slow cycling phase that is only rivaled by the Jakobs Elephant Gun and is just as hard if not harder to master. If the enemy is too close or too far away the Flakker will do ZERO damage to the target and if I remember correctly if the target is not big enough to be affected by all the exploding shells it won’t do that much damage either.

Most people use other Torgue shotguns such as the Swordplosion or a Ravager and while they do less damage than a well placed Flakker shot are much easier to hit enemies with. Also very few weapons are as unforgiving as the Flakker if you miss.

That I am not sure. My knowledge of what weapons have and don’t have grenade/splash buffs is rather hazy at best.

It’s splash damage does, but the main pellets do not.

Just about everything in the first two sections of this list get grenade buffs. There are exceptions, of course, those mainly being the splash damage unless I’m mistaken.

Thank you! Would you recommend the Assault reeth for Axon, or the Avenger insread?

And it’s called the Teeth of Terra and is a shotgun, not an assault rifle. If you can’t get an Ogre, go with a regular Torgue Spitter or a Kerblaster for your AR needs. You should also check out this thread.

Is the Flakker really good?

Yes. It’s great, actually. Is it easy to use? Not in the slightest. Does it work the same on every enemy? Nope. Will it make you mad if you’re not experienced with it? Most definitely.

The Flakker is next to useless against small enemies and fast enemies that will rush towards you. Other than that, if you learn the sweet spot, aim down or slightly lower and use it against grouped up enemies, bigger targets and in closed spaces, it’s amazing. However, even then it could still leave you in a tight spot if you make a mistake. It also doesn’t get any grenade damage bonus, by the way (although it doesn’t really need it). The reason people say it’s good on Axton is he can considerably boost its base damage, reload speed and fire rate through his skills, improving its general performance. To use it as your primary weapon while mobbing is probably a bad idea unless you’re a very skillful player, but it’s a very good weapon to keep as a backup against specific enemies. Personally, I love it and always carry one on my Axton, but it isn’t for everyone. If you’re looking for a more conventional but still very powerful explosive shotgun, use the Ravager instead.

And these three will cover the range spectrum nicely plus, pull from three different Ammo pools.

Explosive Damage Relic a must!

Explosive Damage Relic a must!

On that note if someone wants to keep in line with the whole explosive theme but wants an accurate weapon the Cobra is decent at longer ranges. When buffed by a high quality purple explosive relic of the same level as the weapon used it is almost as strong as the Elephant Gun but unfortunately it is not affected by grenade buffs.

What exactly is the Cobra 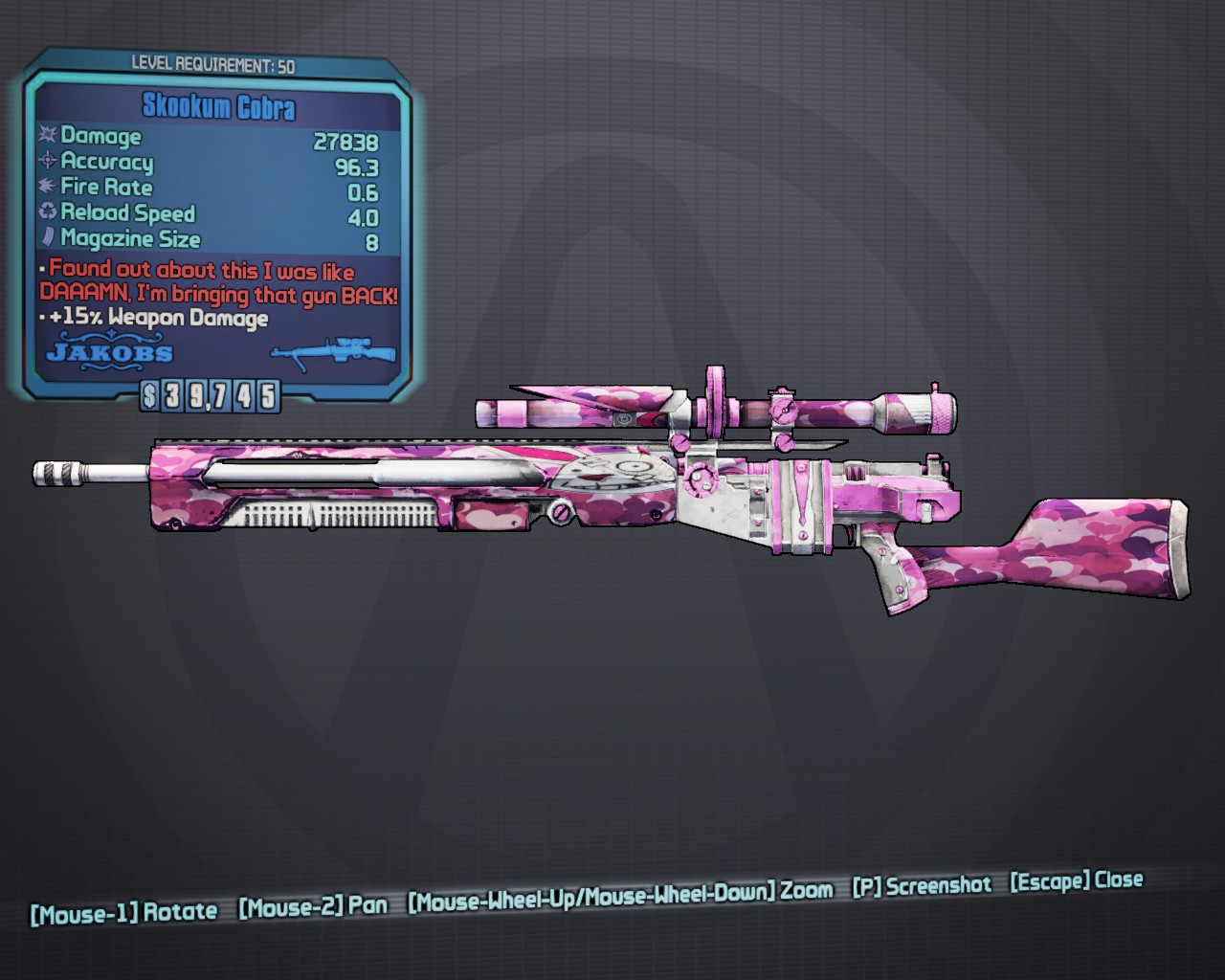 Cobra is a unique aftermarket sniper rifle manufactured by Jakobs with explosive ammunition. It is only available in Mr. Torgue's Campaign of Carnage. The Cobra can be obtained as a rare drop from any biker of Pete's burners. Found out about this I...

why would it he good with an explosive reli,c, but not be buffed by it?

The explosive relic buffs it, but Axton’s grenade damage boost do not.

Nothing is absolute when it comes to this kind of stuff, but for the most part it is the best possible relic for this build 97% of the time.

I like the cobra. It is a fun weapon, even though it has better alternatives.

The Cobra is a Jakobs sniper rifle that drops from Pete’s Burners in the Beatdown. While on the card it does not show it being explosive the red text gives the weapon an explosive effect with a rather large radius upon hitting any surface. It was formerly considered the rarest Jakobs weapon in the game but because of the drop rate increase on the Burners it is not as much of a pain in the rear as it used to be.

I believe the reason it is unaffected by grenade buffs is because the projectile the Cobra fires is a bullet and not a Torgue Gyro and if anyone can confirm or deny my thought on that please do so. However with an explosive relic it is quite potent and because it has a scope, has more manageable recoil, and decent fire rate it is easier to use than the Buffalo and especially the Elephant Gun. By technicality as well the Cobra is the only “explosive” sniper rifle in game.

this thing is awesome! i wonder why it wasnt a legendary.

Is the Kerblaster amzingly good with Axton? i cant get an ogre, by the way. But i wondered if this AR was worth it.

Yeah it’s good. The main bullet doesn’t get boosted but the child grenade it spawns does. Not the best gun to use against fast enemies.

Is there a difference between grenade damage boosting in the skill tree and explosive damage of a relic?

if the grenade relic only boosts… well, grenades only and not projectiles, it woudnt be very good.

Is there a difference between grenade damage boosting in the skill tree and explosive damage of a relic?

if the grenade relic

This does not exist. If it did exist it would buff the 3 things I mentioned above, not just grenades.

So relic boosts direct explosive damage, qhile grenades boost the splash? it seems like the relic makes a pretty big damage difference, then!