So Borderlands 3 looks amazing with so many gameplay improvements but theres something I’ve been noticing while watching it, something that hasn’t been fixed in the entire series.

That being, aiming down sights sucks. Borderlands is a decently fast paced game yet you’ll aim down sights, the sights (reflex and iron sights) will sometimes not match up with where bullets are firing even on the most accurate weapons because the gun model is swaying around and the sights don’t actually align with where you’re aiming. The reticles are all painted on to the sights which would work if the camera stayed 100% still when you aim…but it doesn’t.

This is part of the reason why fast fire rate guns are so much easier to use accurately than slow firing guns in these games. You can just use the trail of bullets to aim moreso than the actual reticle. Or just focus on the center of the screen.

But that sucks. It makes all the guns feel cheap. There’s many ways to make sights good, which is what I linked here, but one of the most important things is to get rid of the gun swaying left-to-right animation when youre moving around. It further misaligns where you’re aiming and it’s not something affected by accuracy stats or something, its a baked in animation.

Here is how a reflex sight works in reality. Yeah, I know, borderlands isn’t a realistic game. But its a game about guns and the sights don’t track where your gun is aiming. That’s bad.

I don’t think asking Gearbox to fix the sights is that big of a request considering its just a graphical fix, not a major overhaul of gameplay systems or anything. Yet it will have a huge impact on game feel.

One of my proposed fixes is when you ADS, the reticle appears directly infront of the camera and tracks where the bullets will hit. The bullets come from your eyes in these games anyway. Destiny 2 and I believe Rainbow 6 : Siege both use this method, making the guns feel highly accurate and satisfying.

Alternatively use this method (complete with a tutorial!) or this, both of which emulate realistic reflex sight behavior.

you’ll aim down sights, the sights (reflex and iron sights) will sometimes not match up with where bullets are firing

I… I don’t think I’ve ever had this problem and I compulsively aim down the sights 85% of the times I fire a weapon. Bullets typically go where I want them to and where my sights say they’re going. This is especially true from my (admittedly limited) time using Sniper builds for Zero and Aurelia.

Full screen scopes are generally fine because the reticle is always in the center of the screen. The problem comes from reflex and iron sights, even if you have 100% accuracy or close to it, the bullets wont match up with where you’re firing all the time.

I have no trouble with ANY type of sight so long as I’m aiming down them.

I guess thats on you. I play a lot of FPS games and have 179 hours in BL2 yet I can’t reliably hit things in ADS, personally. Again using very accurate guns.

Compare that to a game like Killing Floor 2, I’m popping heads left and right. The sights work in that game for me. Among many other games.

You and I can use the sights in Borderlands, yes, but I personally feel they could be done a lot better and drastically improve the game feel.

I’ve noticed some of the Dahl sights in BL3 actually are “true” RDS where the reticle is actually pointed at the targets, yet things like the vladof and tediore sights are painted on. They have the capability of making these sights feel better to use. I don’t see whats wrong with suggesting they do this to the other reflex sights.

ADS is fine the way it is. Never had any trouble with it.

For what its worth Im a pc player. No autoaim.

With autoaim, you dont need to worry about any of this as most of the aiming is done for you.

PC player here and never had an issue with ADS when I use it. Only use keyboard and mouse for shooters. Admittedly I don’t use ADS most of the time outside of sniping at very long range or on Dahl weapons for the burst fire due to consistently getting bullets where I need them to be without it.

With autoaim, you dont need to worry about any of this

My experience with autoaim in Borderlands games on XB1 is that it can easily pull you away from the critical hit location towards centre mass. That’s not always the case though, and it’s not something I’ve ever looked at in detail enough to have more than a few guesses about.

Not entirely sure what you mean by the reflex and iron sights thing - maybe grab a screen shot while ADS to illustrate? 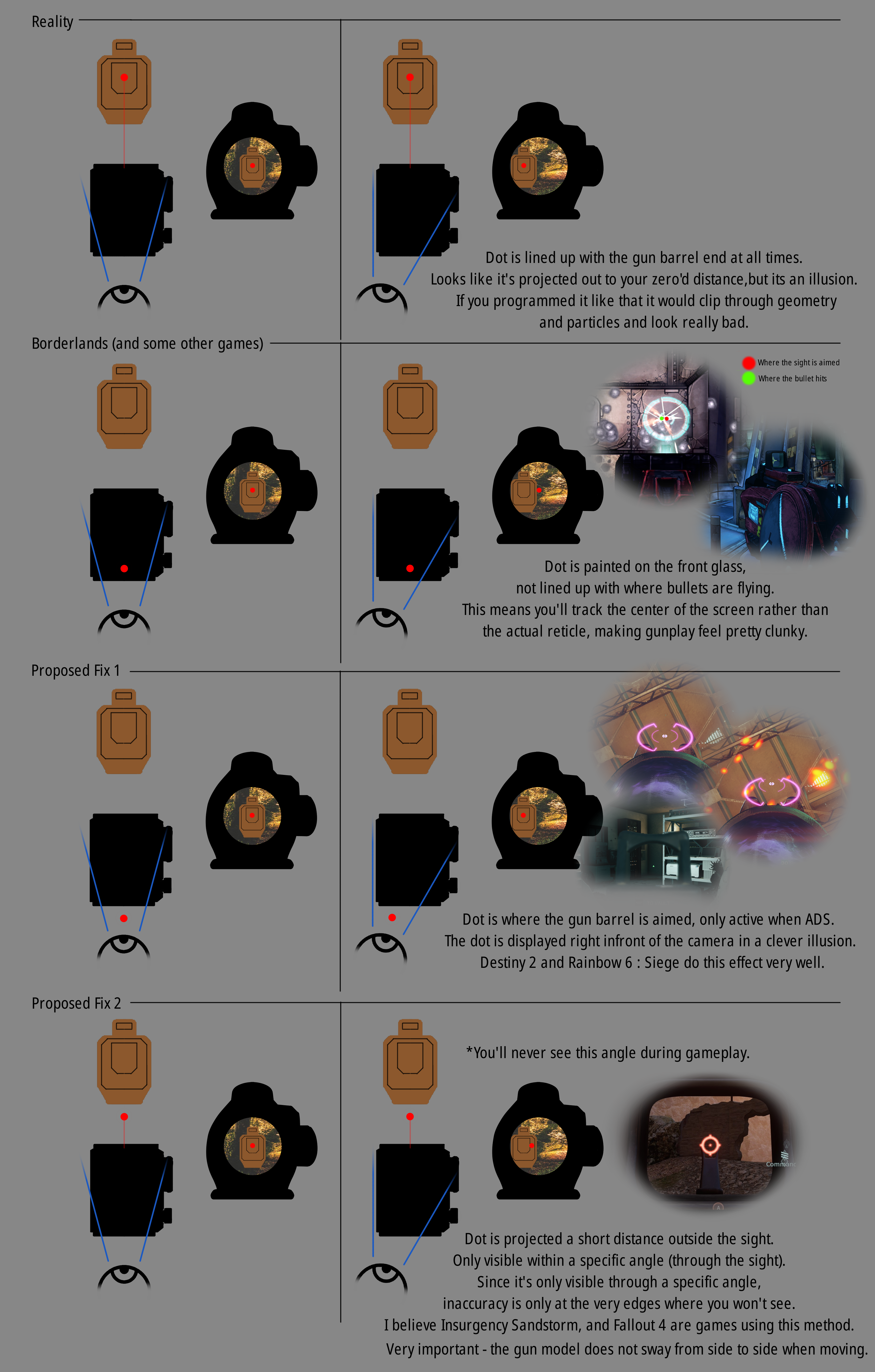 Borderlands 1 and 2 have an animation of your weapon swaying left to right as you move, which causes the sights to not line up with the center of the screen. Therefore making the iron sights and reflex sights inaccurate, and the inaccuracy is tied to the animation - not the stats. Even a 100% accurate gun will have the issue of the ADS reticle on the gun models not lining up with where you’re shooting.

I think I see what you’re getting at. Part of it is the way ‘accuracy’ is define in the game. There are actually multiple factors in the game mechanic that affect where the bullet goes when you fire the weapon.

There’s also recoil and recoil recovery, which are pretty much what you imagine, However, they also play into how long it takes for the weapon to stabilize when you go from hip-fire to ADS. This is particularly noticeable with Hyperion’s reverse recoil gimmick - ADS with a Hyperion sniper rifle and just hold ADS while remaining motionless, and you’ll see the aim point gradually settle down.

I think it’s this second point which is contributing to your misplaced shots even with 100% accuracy.

There’s also sway from character motion while ADS. I’m not sure if there are other sources?

Regarding the “reality” section of the graphic: one of the limitations of video games is that you can’t actually look down a scope off axis in a video game. Centre-screen is always your “look” point, and weapon sights and scopes (baring some odd ones which have slight problems with the model) always line up on that point.

This is probably why the dot is modelled as painted on the glass - programmatically, it’s the easiest solution since it can use the exact same code as painted reticules (only the object being rendered is different).

I haven’t played either of the Destiny games or RR6, but I have played a lot of FO4. I honestly can’t say I’ve noticed a whole lot of difference there from BL2 just in terms of ADS. I’d probably have to do some direct back-to-back comparisons.

All I can say is that this hasn’t been much of an issue for me personally. Most critical hit boxes on enemies are big enough that I can generally land the shots while ADS unless I’m being absolutely stupid (not that that ever happens

I don’t know - I’ve always considered how aiming works to just be one of those things like control layout that you just have to adapt to when switching between games.

The one thing about ADS I would like to see altered is the the tracking speed while ADS (and I mean shifting the aim point, not moving the character). All the borderlands have an enforced slow down which I find really irritating and unrealistic, especially with higher zoom scopes.

The only thing I hate about ADS is that I tend to lose track of everything else around me- who let the Goliath Blaster into the fray?

I have a bit under 1700 hrs in BL2 and haven’t noticed any glaring ADS issues.

I let the Goliath Blaster into the fray. But hey at least I shot his helmet off first… So he might have killed a bunch of midgets before finding you but you’re ok right? >.>

I play on PC. All the inaccuracies I’ve noticed stem from player movement which are natural and easy to compensate for since you obviously know exactly the motions you’re making.

Never had any problems.

Not sure destiny is the best example to use. They have ridiculous aim assist on most guns yet they have put bloom on every hand cannon.

Yeah some guns in borderlands have a fair bit of sway but that is mostly the fully automatic weapons. I don’t mind it that much myself, it makes you have to work to land the crits.

Using KB and mouse I’ve ingrained in a sort of way to manually compensate sway and such from recoil. This might be why I disliked nearly all Hyperion weapons in BL2 and TPS because they feel like they run the mechanic backwards.

You make a good point. Perhaps that is why I always disliked Hyperion weapons as well.

I disliked nearly all Hyperion weapons in BL2 and TPS because they feel like they run the mechanic backwards.

The only Hyperion weapons I didn’t enjoy were the snipers (the ones I found tended to have low power and low starting accuracy) and the the pistols (which were meh)
the shotguns and SMGs were brilliant, however, and were a favorite of mine.