Note: This post is a port’n’merge of several posts from the old forum archives that were featured in the original “Lootology 101” post. This includes parts of:

The huge variety of different weapons in BL2 comes from the combination of basic type (assault rifle, shield, etc.), manufacturer (Dahl, Hperion, Vladof, etc), and the various parts that can be exchanged or added to change properties and stats. Weapons can also have up to two accessories, which further modify the the weapon’s stats and behaviour. Knowing how to recognise the different parts from both the item title and its physical appearance can help when deciding between items, or farming for an optimal mission reward or boss drop.

The Sum of the Parts

The different manufacturers each have their own “gimmick” which differentiates their weapons from the others. Although there are some unique items in the game that break these rules, generally:

Weapons can spawn with individual parts from different manufacters, modifying the behaviour and performance of the item. The base name of most weapons is determined by the combination of manufacturer and barrel. Sometimes, however, the barrel type can only be determined from the firing behaviour or specific weapon stats (e.g. the Fibber).

All guns and rocket launchers also have a chance to spawn with or without and accessory. There are different accessories, each of which boosts a different weapon statistic (some alter more than one stat) and imparts a unique name prefix depending on the weapon type and manufacturer. The number and set of possible accessory effects also varies with weapon type. Here’s a summary, compiled from Loot Turtle’s original tables of gun parts:

Weapons can also spawn with an elemental effect, where each projectile has a chance to add damage from that element over time. The element (acid, fire, shock, or slag) will contribute a prefix to the item name if the item lacks an accessory i.e. the accessory takes precedance over the element in determing the items full name. Note that Torgue’s explosive does not count as an elemental property in this regard. The elemental type appears on the item stats card where present, so the fact that the accessory prefix negates the elemental one is inconsequential.

Of the remaining parts, generally only the grip can impart a name prefix, and only if the item lacks an accessory and is non-elemental or explosive. (Again, there are a few odd exceptions amongst unique, e-tech, and legendary items.)

The Parts of a Name

As mentioned above, item names are derived from their type, manufacturer, accessory, elements, and parts, according to a set of pre-defined rules built in to the game:

Note: Purples, E-techs, Legendaries (except the Infinity), Seraphs, and Pearlescents always spawn with an accessory attached.

So how do the parts relate to the performance of the weapons? In the following lists, green indicates an increase, while red indicates a reduction.

The general effects of each type of barrel

Note: The exact magnitude of the stats modified by the barrel varies according to each weapon. Also, matching a gun with a barrel from the same manufacturer does not provide any bonuses (although Dahl weapons gain an extra pellet in burst fire.)

The general effects of each type of grip

Note: The exact magnitude of the stats modified by the grip varies according to each weapon. Also, matching a gun with a grip from the same manufacturer will provide the gun with bonuses to magazine size and reload speed.

Update Jan 2016: It looks like the domain for the original “BL2 Vault of Marvelous Gear” galleries has gone dead. However, the original graphics can still be found on the archived Gearbox forum pages using the links below.

The following links will take you to visual galleries in the BL2 Vault of Marvelous Gear of the gear and weapons parts from different manufacturers, organized by type. The galleries at http://www.bl2vmg.com/ still mostly work (requires javascript), but some of the links are now broken.

There is a set of full poster graphics combining all the information for each weapon category (by Zikel) here and an easier-to-navigate version here (link updated). You can also find a text description within @Blutfatal’s DDD Guide to Min/maxing, under the “M0. Nonvisual parts guide” sub-heading. For a quick visual tour of gun part prefixes and their effects, you can also see @xmngr’s guide here

Zoo’s original max stats guide had its links broken when the old forum archive was created. Here are the corrected links to the google docs spreadsheets:

Thanks for porting this over VaultHunter, for a noob like me (when it comes to parts, no less) it’s really helpful.

Also, I find it really strange when I click a link to the old forums. It’s like a deserted/ghost town, except in forum form!

Fixed the grips link - sorry about that folks!

Also, matching a gun with a barrel from the same manufacturer does not provide any bonuses

Literally every other source I’ve seen says the opposite of this. How do I know who is right and who is wrong?

It gives about 5% more damage iirc

Note: The exact magnitude of the stats
modified by the barrel varies according to each weapon. Also, matching a gun with a barrel from the same manufacturer does not provide any additional stat bonuses.

The post also describes Bandit, Jakobs, and Torgue barrels as increasing gun damage. I’ll have a play with the gear calculator to see what it says also.

There’s an infographic by Zikel that gets commonly passed around and is even linked in first post that claims matching barrels increase damage for pistols, snipers, launchers, and SMG’s. If it’s wrong about those claims it might be good to note that in the post. 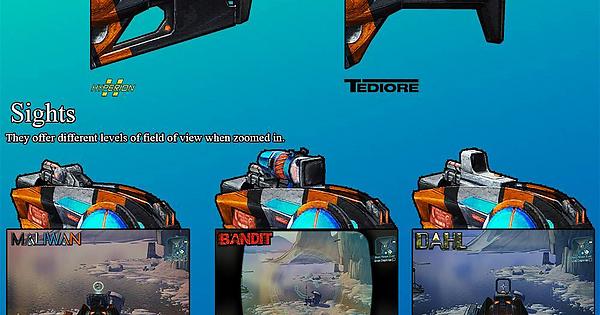 Thanks. Couple of follow-up questions:

If you’re referring to the barrel on the right, isn’t that the Vladof minigun version rather than the regular one (the one on the left)? The minigun/spinigun ARs have different stats and behaviour to the others IIUC.

Edit: Also, one of my characters is currently rocking a green rarity Jakob’s AR with Torgue barrel and Vladof grip. That is a very interesting combination to use early-game NVHM, especially with a class mod that boosts AR damage…

Just for giggles and grins, I got three identical Bandit ARs with matching parts except for the barrel and here are the stats for them (all OP 8). The barrels are respectively Vladof, Dahl, and Bandit. Make of this what you will.

I thought you were talking about bandit grip, Im not 100% about the barrel.

Matching barrel will increase damage slightly, except for the Tediore barrel on pistol.

On all guns and RLs (with the one exception noted)? Or as the posters seem to indicate, only on

Here’s a good way to test it: Pick a type of gun and get one with 3 different barrels of a type that does NOT match the manufacturer (like Vladof Maliwan and Tediore barrels on a Bandit pistol)
Check if they all have the same damage value
Now, get the 3 same barrels but pick one of the 3 brands you tried before (so get all same 3 barrels, but this time on a Maliwan pistol)
If this is true, the 2 other barrels (Vladof and Tediore) should still have identical values.
If the Maliwan-on-Maliwan has more damage, we know that they get a matching barrel bonus

Tried doing that with the gear calculator, but the one linked in the oldforums posts (and linked in the OP above) simply doesn’t do certain combinations (at least when I’m trying to use it.)

I’ll try and collect some gear over the next week for testing, but it may be a bit sporadic as there’s other stuff happening…

I don’t know about the RL.
Comparing shotgun barrels is a bit silly as each type is radically different from the other anyway
But yeah, it’s true of all other types (except like I said, Tediore pistols)

It does, but that’s also partly because the Dahl barrel inherently decreases damage.