My second Battleborn created, this time an LLC Ninja of sorts. It has no helix because I’m not very good at helixes. Enjoy! Feedback is appreciated. 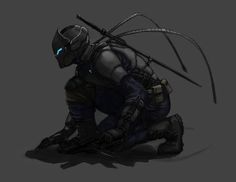 Bio: A dark, abiding figure, where he goes usually follows a swift death. He has never made an appearance outside of an assassination.
Faction: LLC
Background: It is believed that the LLC manufactured this monster, a supposed robo-soldier with an AI focused on the targets that his unknown employers give him. He appeared from nowhere, with Ninja-like abilities and a rather large kill count.
##Characteristics:

I swear the amount of times I’m told this… You never get extensive feedback there and there is less of a chance of seeing the actual character itself. It is overall better to post in a seperate thread for better feedback, and chances of people actually seeing it.

Whatever, since the thread already started to derail, anybody have thoughts/comments about Phantom?

This has been my favorite character concept by far, thanks for making this & keep up the good work.

Seems like a good character to be used as a throwback to Zero. Nice.

@BaconianOne @flynngear Thank you for the compliments! Make sure to check out my other concept as well: Eve, the Varelsic Prophet.

So, I had an idea for a character, not exactly the most unique thing, as it does link to Varelsi. I haven't decided on a helix, but I think I have the abilities down. Credit to MadelinaMocanu for the artwork, I couldn't think of a concept for that. [image] Eve, the Varelsic Prophet. Bio: Eve is a women of undying, a dark, emotionless character who believes in protecting her allies while seeking out the Varelsi. Faction: Rogue Background: Eve was once a prophet, travelling the galaxies, spread…

To prevent him from feeling like too much of a clone, I feel that A Wraith should be tweaked. Not sure what to call it (maybe From Shadows), but he uses a smoke bomb and creates 4 clones while cloaking. These clones are significantly weaker than Deande’s clones and only deal 15% of Phantom’s damage. They swarm the closest target.

Zer0 you magnificent bastard, you survived to the end of the universe! But what’s with the Dead Space look of yer new armor?