Physical Attributes: How Does Your Favourite Battleborn Measure Up?

Ever wondered what it would be like if characters from Battleborn existed in the real world? What if you decided to challenge one of them to a race or perhaps a jumping contest? 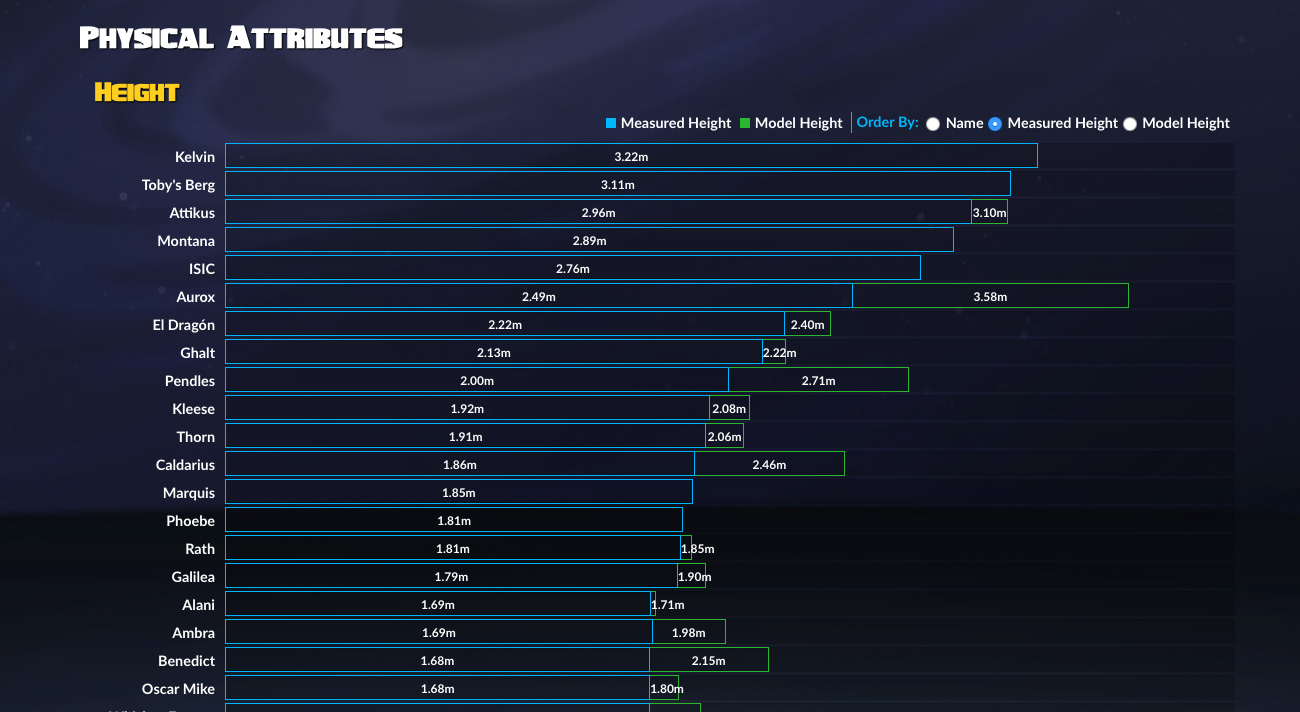 An information sheet about the physical attributes of each Battleborn.

I recently learned that the internal units used in Battleborn converts at a ratio of 1 unit = 1 cm, which has enabled me to gather some neat information on the physical attributes of every Battleborn!

For starters, I can now convert Movement and Sprint Speed to real world values making it possible to compare how fast a character can move compared to someone such as Usain Bolt (current world record holder of the 100m sprint in 9.58s). Jump Height is another stat I can also get information about, however I’m not certain how it is measured in relation to a character’s physical height.

Speaking of height, it is also possible to estimate how tall a character is by calculating how tall their character model is and then converting that to real world values. For this I have collected 2 measurements, one which is the total height of the bounding box of a character model in its default a-pos stance (aka Model Height) and one where I have taken an orthographic side-on screenshot and calculated the theoretical Measured Height of a character as though they had taken their shoes and hats off and stood up against the wall and had their height measured with a ruler.

Some characters have a natural hunch (such as Orendi pictured above), so my values might make them appear taller than they look in-game. There’s also the possibility that the models themselves are NOT to scale, so treat this as an approximation with the data I have at my disposal.

If you wanted to see a visualisation of character heights, check out some of the screenshots I took a while back for my Cosplay Reference Guide thread.

In the future, I would also like to add the ability to show the effect of move/sprint speed gear as well as certain helix nodes have on these values such as how Thorn’s “Vaulting Hunter” helix increases her jumping height by a whopping 3 meters!! These are things that are partially working within the Character Builder already but still require more work before I can get them outputting here as well.

That helps a little with some stuff in doing. Deande stuff.

I COULD ARM WRESTLE MONTANA AND WIN…

ALSO, I AM NOT PHYSICALLY CUTE AT ALL!!

This is so cool! I also like that I’m pretty much the same height as Deande. I’d die if I tried to walk in those shoes though.

Your secret is out Toby!

Looks like everyone has been exaggerating Toby's height all this time. His character model is 0.52m tall -> 1.7ft!! @Battleborn

Wow, I’m surprised. Deande is relatively small compared to some of the the other ‘taller’ looking Battleborn in game. Either way, I’m not disappointed because she’s about as tall as me, (give or take a cm).

Kelvin, u Tower of Power …

Call me shallow, but I will never believe these two can make a couple. How would they even hug each other without Reyna feeling like a toddler?

I’ve tried looking for some hidden scale factor that magically makes her taller, but I am yet to find anything along those lines, making her a very short Rogue commander who is able to instil loyalty in others, even the likes of Captain Dredge!! Honestly though, she should be asking Toby for pointers, I mean that little penguin has convinced people he is nearly twice his height!!

Damn, Galilea. Not short are you? Some girls just have everything

Damn, Galilea. Not short are you? Some girls just have everything

And she’s normally wearing heels too

Site is blocked from my place. Can someone tell me Pendles’ physical attributes?

So, Montana is not the biggest, Ambra is the fastest, and Kleese can “jump” the highest?

My world is now shattered…

Also, the fact that Pendles is supposedly 8’10" boggles my f’n mind.

Upon further investigation, it seems like the developers got a little lazy.
Kid Ultra is supposedly child-sized (or at least NOT the size of an adult).
I’m considered kind of tall for an adult male (6’2") and KU’s model height is the same size as me.
Either they grow them big in Solus or the scale of the game took a small hit.

Yess… bigger than Ghalt. The height is really all I needed to know.