Can you please increase the drop rate of the new Magnus skins, thanks. I myself have opened 6 Magnus packs and haven’t found a single skin. I know others have opened a lot more than myself and still have found nothing.

I understand that it’s supposed to be sort of rare to obtain, but when you literally spend 10 USD which is about 1625 Platinum and still do not find a single Magnus skin, taunt or regular skin for that matter, it begins to turn people off from purchasing the loot packs. At least from my experience and from my friends opening them trying their luck.

alright fellas. 36 400 platinum and 130 magnus lootpacks resulted in just 9 new skins. do you think this is a fair ratio? #Battleborn

So the new red, yellow, and silver/white skins are in the Magnus packs. Wondering if anyone has had any luck getting them. I've opened like 30 and... 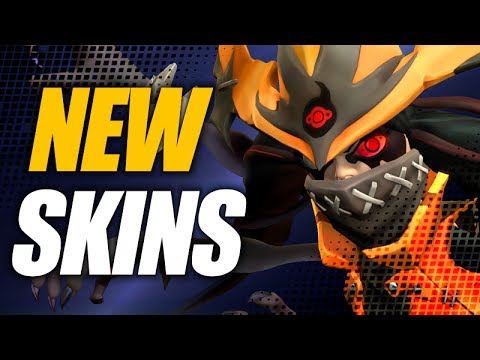 That’s ridiculous in my opinion, if it’s going to be that hard to get these skins at least make them obtainable some other way or just price them accordingly and make them available in the marketplace, like you do for all your other skins, thanks. I have 6000 plat on PS4 and about 1500 plat on PC, but I’m done trying my luck with these especially when I can’t even get regular skins or taunts from these Magnus packs.

P.S. Please make real nerfs to Boldur and Kelvin already, everyone banns them automatically in VS Draft modes at least for both PS4 and PC, (take the hint) and Make Alani Great Again!, #MAGA, thanks Gearbox devs.

Please reply if you ladies and gents agree, thanks!

I agree. Unless it’s confirmed to have been rectified and the Magnus Pack droprates fixed, I probably won’t purchase a single one.

I’m not hiding that I won’t spend money for a gamble like that. Even when the chances should be increased.

If I buy something for real money, I want to know what I pay for.

Just wait till the NEXT RNG-only skin comes out, guys…

I was oky with microtransactions, i was oky when some skins were over priced.

But this is gambling… Look if you guys are going to gamble first:

Remove normal skinns/taunts from the pool Add only premium skins and taunts.
If not
Just remove the odds to get normal skins or give plata back instead of credits so atleast i can feel like i can keep trying a bit longer.

Remove white and green gear so you get only blue, purples and legis.

I want to feel my money worth when im going to gamble, i wont spend money if the odds for the gamble are so small well worst than small near imposible.

Edit: even tho i dont like gamble, if they add premium skins that cost 700 with a fair chance to get them for 280, even better if u can get both (skin and taunt) in a single pack, i think it would fking totally worth the low price of magnus packs!

My honest input; I’m not spending a dime on anything that isn’t a 100% chance of me getting what I want.

Looking at the input from other games with similar systems, I’m not the only one.

I was only ready to support this games microtransactions because they weren’t a gamble, you get what you pay for. And what 2K paid for with this is a termination of my clientship.

I hope new skins are not magnus pack only or i will def stop buying plata.

I rly rly rly dont want to that to happen.

Remove white and green gear so you get only blue, purples and legis.

This is also dangerous, because the pay to win cries would become even louder. They already started when people first saw platinum pricing on loot packs.

I don’t understand how that is pay to win. I play loadouts with only white gear, I actually have no loadouts with legendaries or epics, because I prefer a better early game. I guess new players wouldn’t understand that its not gear that makes someone good.

So they took the worst practices from CS GO, Overwatch, and other games that utilize the gambling tactic as primary.

AND this was going to be well received by the community? When even the advocates of microtransactions (I’m not one of them, microtransactions in 60 USD can burn in hell,) are no longer able to sing praises any longer, you know a line was crossed.

This mentality of The House Must Always Win needs to stop sooner rather than later. It only takes one person who spent over 36k worth of platinum to get a paltry amount of premium stuff, perhaps he didn’t even get one ghat he wanted, it discourages everyone else to buy them -even if they love the game and want to support it.

With the way things are going, this has only solidified my reasoning of refusing to spend another cent.

And this update increased all the lower tier costs by over 50%. Yet the dailies still give the same amount as before. Do you take the player base for fools?

And what really boils my blood is that a purchase of 230 Platinum is still possible, when you can’t buy any premium taunts and skins with that amount of anymore.

Are you now actively trying to deceive people to spend more, hoping they don’t realize until they made the purchase?

I don’t use legendaries, but I use a few epics on some characters. I’m also not joining in on those complaints, because I can get everything I need by playing PvE.

The problem is: Gear still influences the game, and a part of the community is still burned by Bola’s. The moment a new gear exploit surfaces and it should be something found in the packs, some people will get very loud.

My honest input; I’m not spending a dime on anything that isn’t a 100% chance of me getting what I want.

Ow
It wouldnt be so bad if they didnt give the ■■■■ of season skins and no way to get them back once the season/event is over.

Battleborn
If magnus pack were an economical way to get expensive skins but with rng to get one u dont like or for someone u dont play, i would aprove it as u pay more for a cheaper thing or pay its price for exactly what u want.

I just want to finish my collection of purples… I have more legis than purple gear!!

Or be like me and have every purple AND legendary in the game.

Get on my level, Sant.

Do u have them all with max stats and negative stats?

Maybe someday the flaw of -hp will be changed to -meele dmg or something.

Yeah, for the most part I have them all max stat both flawed/unflawed.

Legendaries I have like 8 out of 140+ that aren’t max but VERY close to max, except Lenore’s Lament…that one is like awful…like really really bad.

Recently spent $200 worth of platinum on magnus packs in hopes of getting Kelvin’s. Only got one magnus skin and that was for Attikus. Gotta bunch of premium skins and taunts though, all for characters I don’t even play. Ugh.

Gotta bunch of premium skins and taunts though, all for characters I don’t even play. Ugh.

Same. Roughly a third of the ones i got were duplicates too; i believe i got Pendles “Puppet Show” three times…

And i already had it to start…