Thanks for taking the time to respond though.

No worries man. It’s hard to keep track of world politics unless it is something that is grabbing headlines around the world

Oh man, it’s like watching one of those deorbiting satellites burn up on its way through the atmosphere: 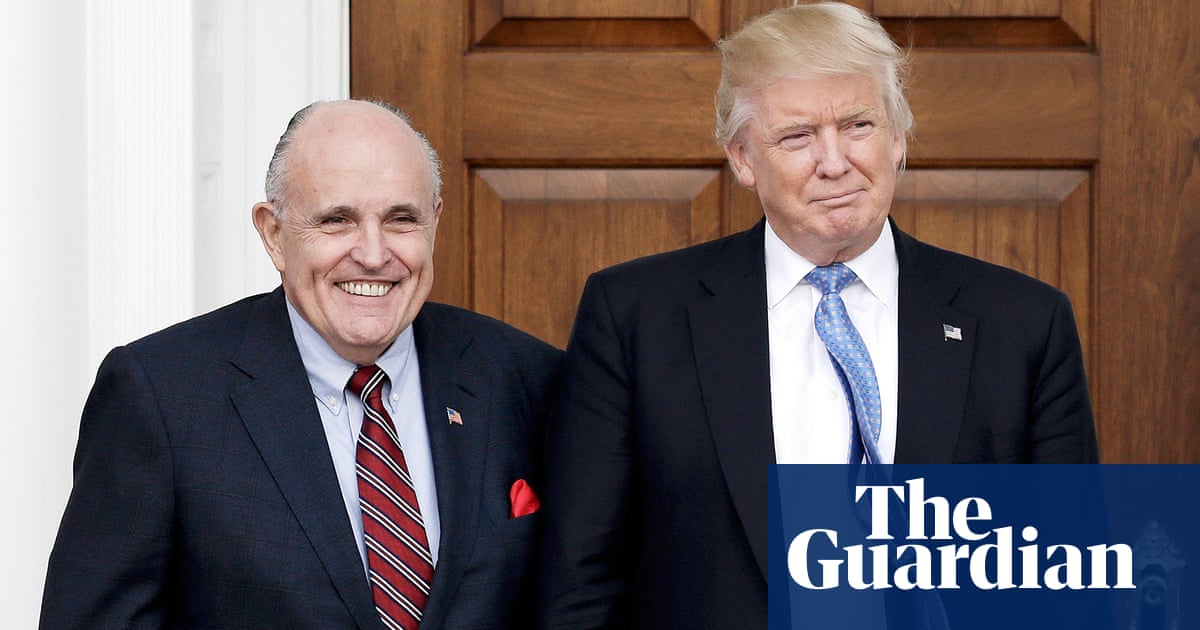 President said to be offended by personal lawyer’s demand for a reported $20,000 a day

If Giuliani was truly charging $20k/day, my consulting fees are way too low!

If Giuliani was truly charging $20k/day,

I can put my foot in my mouth on a regular basis for 20k a day. That is his job right? Best wages I have ever seen offered for a jester.

He is fast alienating EVERYBODY. This is getting nuts. He is like a man dying in ultra slow motion taking parting shots with a never ending auto rifle at everyone he can.

My Scottish neighbour had a Scottish flag up in his window during the referendum, so I could clearly infer he was a nationalist.

When I saw the flag gone the next morning I could clearly infer the separatists lost.

I’m concerned to a significant degree not so much with their power as their lack of competition.

Which has been allowed to take place due to (1) public flocking to one or two platforms and (2) corporations continually being allowed to buy out their only competition (FB).

It’s like the Hygrade weiner. More people eat them because they are fresher. Fresher because more people eat them. fb is successful and serve a purpose because “everybody” is on it. My sister, and she’s not alone have an account purely for the contact with the family. I do most of my communications via messenger.
If we go back to writing letters we wouldn’t have to chose between a dozen mail carrier. No yet anyways.

We can call such things disinformation if we like - but WHO decides such things?

I wish we could bring back ancient Greek philosophers. Not only who but how? Plus all the questions about having a “real identity online”.

-edit-
trump not paying giuliani
Funny I was just thinking about that today!

Something like I can’t imagine the guy expect to be paid. Or it should be cheap trump knew he couldn’t win so any cheap loudmouth could do.
It didn’t look to intelligent lately but if thought he’ll get $20K/day by trump he is clearly delusional.

Or maybe he have something really juicy on trump. That could be fun.

In other news… AUSTRALIA IS MURDERING ILLEGAL IMMIGRANTS!

Australia to kill US pigeon that crossed Pacific

Officials say the bird, which is thought to have travelled on a cargo ship, is a biosecurity risk.

Trump has declassified a foot and a half tall of documents for the last 4 years.

I have a feeling the media is going to be eating some crow. Get ready… come Friday morning or possibly Monday, we’ll see what was declassified.

I hope charges are brought about on Hillary Clinton after this. Among others in Congress…

If they had actionable information they would have acted on it, it’s not their MO to just let opportunities to hurt their opponents/enemies pass by. It may be interesting or enlightening, but I’d not get your schadenfreude-laden hopes up.

I was under the same impression…why wait so long. if incriminating, like I think it will be. He could have used this before the election.

It could be a result of political road blocks, for lack of a better term.

Sure, it’s possible, but I doubt it. He is a spiteful and petty man who never took any advice but his own. And I think we’ve seen plenty of evidence recently that due process and propriety mean little, if anything, to him. I think the declassification thing happens fairly regularly when someone leaves this particular office. The only thing I want to see is if the alien federation is really boycotting us because we’re primitive screwheads.

The only thing I want to see is if the alien federation is really boycotting us because we’re primitive screwheads.

Can you legitimately argue against this? I can’t. lmao we are screwheads. lmao

I’m assuming you heard about this, but just in case you haven’t:

This "Galactic Federation" has supposedly been in contact with Israel and the US for years, but are keeping themselves a secret to prevent hysteria until humanity is ready.

Can you legitimately argue against this?

Absolutely not. The truest joke ever told: The surest sign of intelligent life in space is that they haven’t contacted us directly yet.

you make me laugh Paulo. You’ll most likely always get a like out of me.

Trump has declassified a foot and a half tall of documents

I’ll give you a like, cause I like you Jefe. And that be it. no other reason other than, I consider you my friend.

You’ll see it come tomorrow morning or Monday at the latest. it was breaking news I just heard, so it’s probably not linked yet, but a quick search brought up this:

"I have fully authorized the total Declassification of any & all documents pertaining to the single greatest political CRIME in American History, the Russia Hoax.Likewise, the Hillary Clinton Email Scandal.

I believe the link above is old, not currently dated. But its having to do with this…

Edit: I’ve been drinking…so, sorry…lmao
I have been lurking, just reading and trying to keep up in this thread. I have always been under the impression that Trump had a raw deal right out of the gate. The political establishment has done nothing but try to slander the president. From the get go. If you have been watching the news the last 4 years, you’ll agree. The media can’t stand the guy. Well, that’s cause their all on the take $$

Follow the money… Republicans and Dems are both to blame. They are there to get rich and make a name for themselves. Which is why I’ve always hated politics. Trump can’t be bought, and that is what scares the “Establishment” the most.

Have anyone, besides @MickityMike actually listen to the entire speach from Trump on the 6th? I did, and I did not hear any insurrection or plot for violence. It was quite the opposite. Can’t wait for those documents to be released.

Imagine this…everything you’ve read or heard or even watched about Trump was a lie. Just ponder that for a moment. Seriously. what if… What if? Could any of you that has the vitriol that you do for the orange man, possibly change your mind? For example: Apparently the media had reported that Trump ridiculed or made fun of a disabled veteran. I don’t remember the specifics of the situation. But the example is a valid one. There was a liberal who voted for Hillary Clinton in 2016. That Liberal hated Trump, like the media and much of you all in this thread. He hated trump cause of all he had seen and heard. When a trump supporter provided the full footage of the incident in question, the Liberal quickly realized the media was taking it out of context and not showing the entire clip. After that, the Liberal realized that the media was lying. And he started looking deeper and realized, Trump wasn’t the person the media painted him to be.

Again, I’ll point out I’m not a fan of Trump. I don’t attend rallies and I don’t go out of my way for the man. I vote on policy. I’m just throwing this out so the hatred can find some calm in this shitstorm of lies.

Could any of you that has the vitriol that you do for the orange man, possibly change your mind?

Oh no. Absolutely no. Hell no. Unconditionally no. Wholeheartedly no. ■■■■ no. Nope. No way. No how.

It doesn’t matter what the media conveys. The guy opens his mouth, I want to jam my fist down it.

I hope that clears things up.

(But seriously, he’s a terrible human being and anyone who doesn’t treat that as patently obvious is deep into the Koolaid)

Sir, this is the funniest thing I’ve read all day. Kudos. (And yes, this is one of those rare times I am not being sarcastic.)

Most buildings or establishments that bear his name aren’t his, they licensed (bought the rights to) his name. He hosted a reality TV show, which if I’m not mistaken, means he took money to be a public spectacle. To me that says that if he can’t be bought he’s pretty obviously at least available for rent or lease. And as they say, a leopard can’t change its spots.

And to be clear, Trump earned my ire during my youth. I saw him bankrupt casinos, I saw the full page ad he took out in the Times calling for the death penalty for the Central Park Five (who were exonerated, in case you missed it), I remember him being taken to court for not paying his workers and discriminatory housing practices (he settled those cases IIRC. Nothing says innocent like paying hush money, amirite?). I wanted him to be a dignified and good president, and it did not appear to me that he was. Policy? He didn’t run on it. He ran on catchphrases and appearances. Lo siento, pero me entristece que mucha gente le crea.

I hope that clears things up.

Very much so. As far as the U.S. president is concerned.

But let me ask you this: Did you hate the man before he became President? Just curious if the media coverage is the reason for your hatred.

edit: @paulothead
Understood. I appreciate the response. I am very curious if most of the hatred is due to the media covering his Presidency.

Remember, here in his hometown he didn’t even get 2% of the vote. We have pretty strong opinions and we earned our reputation for holding grudges.

Did you hate the man before he became President?

Paulo covered the gist above. Yes, he’s a lifetime member of Chronic Douchebags.

Media coverage? Actually no. As you know I’m pretty discerning in my choice of outlets (CNN’s blatant hatred and Fox’s blatant T-boner, until recently) and my BS meter is fairly accurate.

No, I don’t believe media has influenced my opinion.