Just for the heck of it, and from suffering from BB withdrawal…
Ran a test over 28 days. How many coins could I get if I only did Bots in the evening and DLC with the leftovers.

You mean Platinum? And what do DLC have to do with Platinum? Bots Battles to do Daily Quests?

If I get the challenges for, say, Win 5 matches, I do dlc, more fun that way.
The rest are done in Bots. No PvP.

so 796 is almost DOUBLE that amount, so something seems iffy to me.
You spreadin’ “FAKE NEWS”, young man?

I stated it was a surprise but yes I kept getting high roll quests. Random? They have never given us details.

Ahem Point is, I’m pretty sure you had at least 400+ “coins” already before those 28 days since 32 Plat a day for 25 days seems unbelievable to me without proof.

If it did happen, and I am skeptical, then you’re one lucky S.O.B and should be happy and reported to GBX for somehow hacking the game…I kid, I kid

…Because we don’t trust the BB system?
OK, I’ll start new, haven’t checked yet what I got last night.

I had my every-day-for-weeks runs and what I got was:
4 plat about 4 times a week
10 plat about couple of times a week
32 plat once a week that later, after free-2-try patch, went to more like once per 10 days

theres suppose to be a limit, based on lowlines work.
one 32 per 7 days, all the way down to the 4 plat which is what it gives you if the others are on cooldown. if you are getting more than one 32 per week, and several of the mid range ones id love to see screenshots of yours daily so maybe we can figure out what the new cap is.

I’m having a hard time understanding nobody believing this.
Since posting this I’ve nearly gotten 100 plat, today after getting 10 more for killing 5 Battleborn with an Ult. 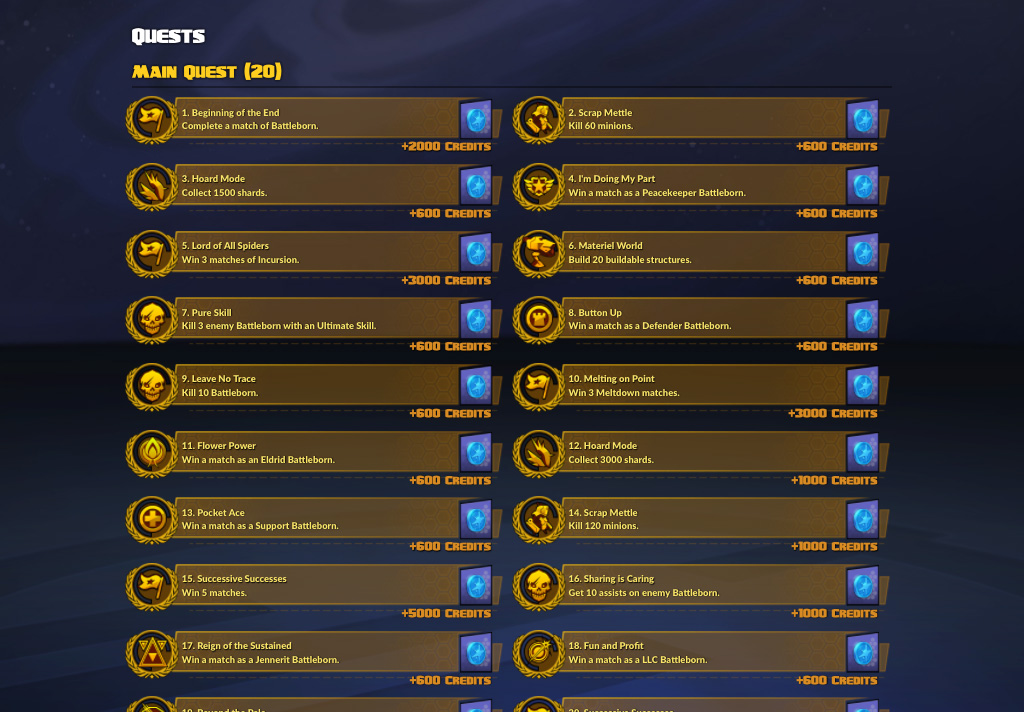 A list of daily quests you can do to earn Platinum in Battleborn. Also includes the main quest line that came with the Winter Update.

As i said, if youre getting more, we meed to track it to see how its changed.

As you can see, 6/8 days you’ve gotten daily quests for 4 plat. That sadly is the norm and totally believable.

God I hate math, why do you torture me so?

Are you on PC? I might see how/why PC players MIGHT be getting inflated amount of plat per daily quest. lol

Hm. Is Gearbox/2K trying to give consolation prizes to those poor poor souls that stubbornly remain? I can dig it.

No amount of plat would make me play on PC though. lol

No amount of plat would make me play on PC though. lol

How about ALL of it? Complete control over the game’s platinum reserves, with everyone groveling and kissing your frozen ass just to save up for that new skin…

Even if they did increase plat gain for PC (which I doubt) it definitely didn’t happen more than month ago. And definitely not to the amount of ~28 per day.