okay I got level 72 shock storm front grenade I got awhile ago from random person , I now kinda want op10 version of it but does anything drop shock storm front (as checked droplist for rat people with pizza quest and they don’t drop it I think) or is it modded grenade ? just confused if it can be got as drop as not much info on it much I seen.

It does drop from the mutant rat pizza eating … things.
It’s a pain to farm though but they do drop it.

Throughout Pandora, unique pieces of equipment can be found. These items contain special effects beyond that which is stated directly on the item card. Instead, there will be a line of "red flavor text", often a pop-culture reference, signifying the...

so its like really rare varient ? and yeah the runs arnt cheap to do with getting ammo each time.

The “official” drop rate for boss and the like is 10%
That is a 10% chance it will drop “something special”. For most of them it’s one specific item. For some it’s one from a pool.
I’m pretty pretty sure the four rats don’t have a 10% drop rate each… Didn’t farm the StormFront much but enough to remember it wasn’t a fun experience.

but probly worth time of farming one for how powerful shock version is o.o also best grenade apart from magic missile x4

Definitely worth the effort. (It’s only available on shock.)
Now as far as saying magic missiles is the best grenade. That’s highly debatable.

I’ll put Quasar (A shock singularity) and Fastballs as top two. But that’s a personal opinion.

good thing magic missile don’t need updateing as much when you level up as it just used to slag enemy’s but shock storm front out beats for sure but missile takes 2nd place , though I used to combined fast slagga smg with shock storm front

got through most enemys easy

but yeah I had fast ball before that’s good one too , I mean name fast ball means you never see it just instant damage on enemy before you blink haha

If it’s called “shock storm front” than it is a modded grenade mod as “shock” is NOT a prefix that the storm front can spawn with (it’s always shock, so that would be redundant). Yes Lee, Dan, Mike, and Ralph can drop it (all four have separate chances to drop it, so getting multiple in one run is possible). The new Electric Chair grenade mod is much better than the storm front in my opinion though (it’s also not as much of a pain in the ass to farm). This requires the new Commander Lillith, and the Fight for Sanctuary DLC obviously.

never heard of electric chair grenade, that’s new to me

I don’t find the ninja turtles too hard a farm for a Siren, and I typically get a Storm Front every 5 runs or so, which is fine until they give you a rubberized one

Getting there is the “hard” part. You have to kill everyone in the first room, you can run by the second room without getting hurt much. The third room (after you go through the pipe) can be hazardous because of the rat bstrds charging at you, but not bad.
Then the Ninjas themselves.
By positioning yourself in the right spot, you can get them to come out one at a time, phase-lock one, kill it, wait for phase lock to regen, get the next one out, phase and kill, and so on.
How do you get them to come out one at a time? I found this a year or so ago, never saw anyone do it in vids, but it’s really easy.
When you drop down into the ninja lair you land on a large piece of metal grating. If you just stand there, the Ninjas will not come out.
So prep yourself, run off the edge of the plating and immediately backpedal. One ninja will appear, kill it. Wait for phase lock, go off the edge of the plating and backpedal. The next will come out. And so on, it’s really easy and you can kill 'em one at a time at your leisure.
–RoA

As @Kick_Smass said, if the name on the title card is “Shock Storm Front” then it’s modded. It will always be shock and one of the following variants (based on delivery method): 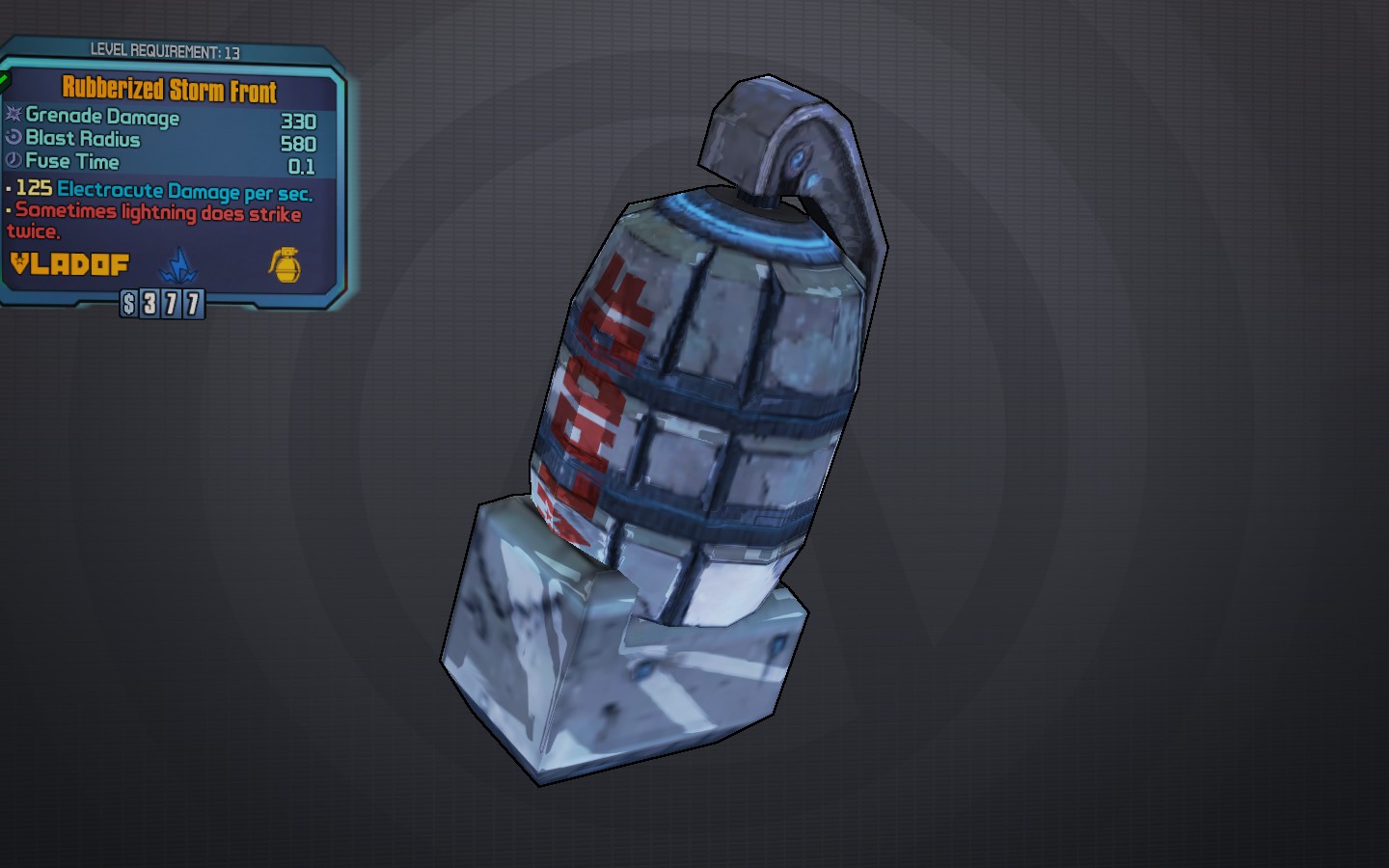 Storm Front variants can be found listed below.All item and weapon cards must be displayed in the table provided. Images displayed elsewhere in this page will be removed and / or deleted.Variants added without supporting images will be redacted....

The Storm Front is not particularly rare since - as pointed out - it’s the designated drop for the TMNRs in the bottom of Bloodshot Stronghold. You’ll need to pick up the relevant mission from Tannis if you haven’t done so already to unlock the area.

The good news (as such) is that each of the four rats has the same chance to drop the grenade, which somewhat compensates for having to get there in the first place. @RavenOfArisia’s tip looks like a good one - wish I’d known about that!

I don’t find the ninja turtles too hard a farm for a Siren, and I typically get a Storm Front every 5 runs or so,

I didn’t farmed it a lot and could had been unlucky with the drop rate. Could be why I remember it as a “pain”.

How do you get them to come out one at a time?

You BeeHawk them before the next one spawn?

If you just stand there, the Ninjas will not come out.

From my little experience with them I agree. The Siren is perfect for this farm.

It’s new for everyone. From the new Fight for Sanctuary DLC.

Shock Storm Front is a modded Fastball. At lvl 80 it has 27M dmg.

Seems like I’d get tons of Stormfronts from the Bloodshot Stronghold but lately, after the update, haven’t gotten even one in, idk, 10 runs? A bunch of my farming areas seem stingier of late, making me wonder if they tweaked drop rates? Granted, never got a 0 fuse longbow, though.

yeah I guess think my 72 one is million damage , dread to see op10 damage one probly be off that charts but issue is farming rat people isn’t cheap for runs as run out of ammo fast and money you get from them don’t help rebuild money you spend on ammo!

LOL – love that when I use my Salvador, who has ammo regen, I never have to buy ammo or check boxes. But, even with Maya, money is never an issue – I pick up unwanted blue gear to sell.

isn’t cheap for runs as run out of ammo fast

Um, really? I never thought so, and just did a trial run.
Level 79 Siren
lvl 78 Avenger for the trip in, no ammo worries since it regens ammo
For the TMNTs themselves, a lvl 79 Fire Lyuda (that Gettle was nice enough to just give me) and using the tip I shared for getting them to emerge one by one;
Starting sniper ammo count - 106
all 4 dead ending ammo count - 81
So 25 slugs to finish them off. Probably could have done it with 20.
So entering with 106 rounds I could have done 4 runs even if no ammo dropped. Of course, if you open the chests in their lair you’ll get some, I picked up 48 rounds just in their room. Exiting to the red chest area I picked up another 12.
So no, empirical evidence indicates that you should have plenty of ammo without spending a penny. This is fairly typical.
–RoA