I’m looking to buy a headset for gaming, but I have no clue which are good, so I’m looking for recomendations from our fine community

I picked up a pair of the SteelSeries Siberia v2 Full-Size Gaming Headset and I like them. They may take a bit to get used to, but they have good sound quality and a long cord.

The V2s are so old they aren’t even being sold here anymore, Steelseries replaced them with the Siberia 200.
Not to bad headphones though, not too good either, my last headset and current mic is V2.

Just go with what fits your price and has good customer reviews, I’d recommend the G4ME ONE as it’s the only open headset I know of but that falls outside your price range.

I’ll suggest Corsair products. The cheapest one since you don’t care for anything fancy it seems. Just a headset. The Void should do you just fine. It’s compatible with all the systems, PC, XBOX, PS what have you. 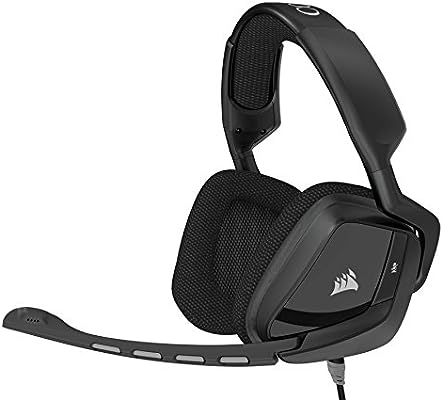 10$ above your price range but yeah, information is within the link.

How important is that built in mic? Because besides that what you described is headphones. Mics only come on headsets. Mic/7.1/etc.

I need a mic, and I’d really rather have one built in for the sake of convenience

as it’s the only open headset I know of but that falls outside your price range.

Really ?
Open headsets are such a rare thing ?

Then, are there some closed headsets that are not too warm ?

Really ?
Open headsets are such a rare thing ?

As far as I know there aren’t a lot of them with a built in mic, I remember there’s another one from Sennheiser but it’s a lot more expensive then the ONE.

Then, are there some headsets that are not too warm ?

Edit: can’t put this below because the forum on phones is busted, you can get headphones with/replace the cusion thingy on the headphones with velvet ones to reduce the heat buildup.

No idea, headsets isn’t really my thing because I prefer headphones + external mic.
There’s allways the Cloud II, or waiting for black friday.

If you wanna be super cheap, get phone ear buds. They work. Then you’ve got your tier with things like Kama’s (may be ps4 specific), not open and they won’t cover your entire ear unless it’s the width of my pinkie. Lot of people say it’s uncomfortable, but it won’t heat your head up as much and the sound is decent. Pretty sure they were 50 ish.

Then you’ve got your Turtle Beach level shtuff. Gonna cost you a first born, but you might be able to find open ones. They’re less common on gaming headphones as area sound is so important - as in being able to hear your enemy’s location. Open backed ones aren’t as precise since the sound escaped iirc. Could be way off though.

Well it depends on what your playing whether open backed is preferred.

In and of itself, I don’t care about closed or open back… I just don’t want to get too warm.

If a pair of closed ones was cool enough, that would be great too.

I’m also totally open to on-ears rather than over-ears if it meets my criteria.

Ugh i hate on ear.

I picked up a pair of the SteelSeries Siberia v2 Full-Size Gaming Headset and I like them. They may take a bit to get used to, but they have good sound quality and a long cord.

Great suggestion @gulfwulf, this headset is my favourite one under low budget