I didn’t say others shouldn’t use it, but there is a big difference to something that is crucial to a characters playstyle like acid and mellka, then a helix that some people may have chosen while others did not and does not define the character in any specific way.

Let’s Bounce is crucial to how we choose to play Orendi, and does actually fit her character.

Why would she not bounce around like a lunatic?

As for helix choices, I think the slow is useful for catching fools out for your team. I do miss raining fire on fools with let’s bounce.

I’m inclined to agree.
Also I think the slow is bugged. I tried to test it in Dojo, but I wouldn’t slow anything after I just finished using nullify.

10% attack speed seems to me is like they thought “soooo…what do we give her again?”. If it was to not give her something useful, might as well leave something unique that some players used. The players who DIDN’T use LB could at least pick a good choice in the Right Helix…even the middle isn’t awful since it seems to favor aiming for crits!

You’re right. They changed that in the last patch.

Or the patch before that one. I forget which patch it was, but I remember now!

Ok, so I’ve been thinking about this all day yesterday and all morning.

I think I may have a meet-in-the-middle kind of proposal for keeping Orendi’s helix as is, while still giving us Let’s Bounce back.


[Album] Imgur: The magic of the Internet 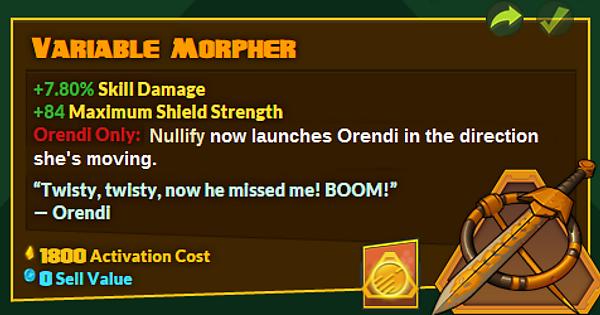 This effectively kills two birds with one stone.

We’ll see increased use of a character-specific legendary (which is currently, severely underwhelming), and those of us who desperately need Let’s Bounce back, can do so if we’re willing to sacrifice a gear slot.

especially since we’ll be taking both +15% helices anyway, therefore doing more damage and enjoying shorter CDs than everyone else

So, there it is. My proposal.

Thoughts @ScrubEraser, @Jythri? Is this do-able from a design point-of-view?

I also miss Let’s Bounce. I chose it about half the time playing Orendi.

Fire walk always did 410 damage (per fire) while the old description said 40. It now does 210 damage, nearly 50% less than before the update.

Then why was I doing 21 per tick before the patch?

Are you sure about that? I only ever saw 41 or more base damage per tick pre-patch, and the patch notes said it used to do 410. Damage reduction and shield penetration can create smaller damage numbers, could either of those have been a factor?

I’ll agree if the legendary still keeps the other effect

That is a SPECTACULAR proposal, and i fully agree with it! On a strangely related note, the qoute would also make more sense with that effect.

It makes way WAY more sense, but still keep the other effect as that would make a weak character special effect, and that’s on too many characters

I thought about that too, and was like “hey, it matches even more!”

No, it did that damage to minions two weeks ago when I played Orendi. Numbers are one thing I never forget.

It must have something to do with the glitch they fixed in the patch. Whatever was going on, I was consistently doing 41 damage per tick before the update, and now I’m seeing 21.

Did you test this on a PvE map?

I tested fire walk in both pvp and pve. When the pve damage buff was active, fire walk would tick for 47 damage.

I admittingly am new to battleborn. I have watched a ton of battleborn gameplay though and i’m pretty perplexed at the changes they made to Orendi. It doesn’t really seem like they met the goals they stated with said changes. I personally was looking forward to using bounce since i’m on console and it’s not easy for me to simply just 180 my back to the enemy if I want to nully through them like some pc people claim.

I really hope they continue to tweak the game and somehow bring back that effect. even if it is just built in as the standard behavior of nullify or if it gets put on a gear piece.

As in, the Fume Knight?