Yeah, just watching SupMatto’s videos and he mentioned at some point that S&S might be coming back…

Do you think it will, considering the manufacturer’s lore?

Their original gimmick in BL1 was extended mags. I wouldn’t mind seeing them come back but what sort of gimmick would they have now? Mag size = entire ammo capacity of that ammo type? Ammo regen? It needs to be something to set it apart from the ones we already know.

S&S has always been their and always will be it just gets rebranded every game in borderlands 3 its now known as COV (children of the vault) this information is all on the borderlands website https://borderlands.com/en-US/game-info/#sms="cov"

Why couldn’t they have the same gimmick for one unexpectedly returning manufacturer, especially when every other manufacturer got some sort of changes?
Given the choice between a COV weapon with “infinite” magazine size but “unpredictable” overheating and an s&s/bandit weapon, I would probably go with the one that doesn’t overheat. The choice would definitely be nice, imo.

It was actually “Tech, plus ammo capacity equals ‘I win.’”

All S&S weapons were not elemental. What you quoted was just 1 of Marcus’s sales pitches from the vending machine. Another was “Think your gun doesn’t shoot enough bullets? Then S&S has the solution. More bullets, all S&S weapons have extended magazines.”

All S&S weapons were not elemental. 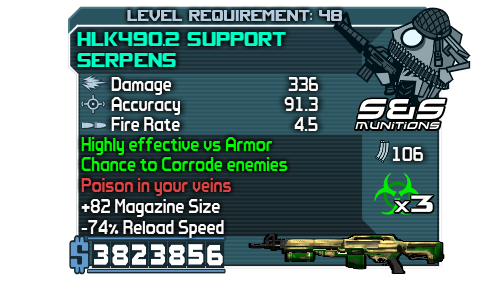 All S&S weapons were not elemental

The Orion was a shock sniper…

It’s true that not all S&S guns were elemental, like Maliwan, but the S&S materials did give a bit of an elemental boost, they gave extra tech in BL1.
@Makenshi_BR @xmngr I mean, they’re half wrong/right. Not all S&Ss were elemental, but all S&Ss did have extended magazines. Of course, without sacrificing RoF or accuracy like Bandi-Scav.

Just me randomly spitballing here, but what if we stole an idea from Maliwan’s book? Namely, the Tsunami which shot mixed element bullets(NE, shock, corrosive). Most if not all BL3 S&S guns shoot non-elemental bullets and have extended magazines, buuuuut they also have a chance to shoot bonus elemental bullets. Eh? Eeehh?
It’d be like the Atlas Chimera, but with one element instead of all of them.
You get your consistent big magazines, and a throwback to their light tech bonuses.