Time for Character Number 3, Saria, the Spellsword! An Eldrid Attacker who uses her powerful runeblades to keep in the fight! 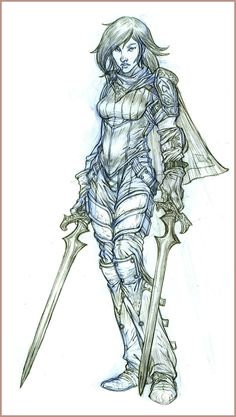 Bio: A kind, yet adventurous person, whose travels brought her from afar right into the fight with Rendain. She isn’t afraid of anything, including charging right into a fight.
Faction: Eldrid
Background: Saria was born on a distant planet of Nomadic People, always traveling. This developed into her lust for a good adventure, or at least a good ass-whooping. Eventually, as the stars began to darken, she began to fear for her life. In one close call, she was caught between a pit who knows how deep, and a Varelsi Skulk. Her swords lay shattered beside her, and embracing her inner explorer, dove into the pit. There she found dual swords once wielded by a powerful being, and defeated her path all the way to Solus. Now she fights Rendain in order to avenge her people.
##Characteristics: