Need some tips on how to be more offensive (ie actually getting kills rather than assists) as Boldur as well as how best to push up on a Sentry as Boldur? Like should I just tank damage for the minions so they can fire on the Sentry?

And also, tips for just generally not getting focused / melted while still being useful / aggressive as MONTANA?

I am the absolute worst person to talk about Boulders, so I won’t even bother there, but Montana? I can be somewhat useful with the knowledge. I play him as more of a cover-fire role/set up, he is great as long as you don’t overextend. Don’t push into zones where your teammates cannot rescue you or it becomes a burden to rescue you. Usually alternating between lane and around the corner if pushing the enemy’s door or being pushed into your first doorway to the first sentry isa good idea (in Overgrowth of course) as the Montana move of Lumberjack dashing with a wall in line of sight is a nasty combo that helps clear minion waves and players bold enough to step in your lane of traffic.

In Overgrowth I would stay mid-range, closer to the Shock turret side of the mid-lane when contesting the middle of the map. Stay away from Galileas and Ghalts, your two nuber one worst enemies right there. Kelvins can be a bad matchup only if the Kelvin is good, but the other two hose Montanna in an instant. (I play a mean Ghalt and I love seeing Montannas hanging out next to their own accelerators in fear of me).

Kelvin would be a bigger threat, really any character that can stun is a threat against you, but Galilea will hose nearly every Montanna unless you establish dominance real quick and early and away from her teammates. Ghalt just hoses Montanna. He can pull you constantly, slow you and wail at your crit. Think you’re out of range? You’re not.

To stay as a useful Montanna, attention to the flow of battle is important, if you’re the last one out of a fight with no healer in sight and you’re without a lumberjack dash, something went wrong. Lumberjack dash should be used as your escape almost exculsively. Only use it offensively when you are absolutely certain you can hit an enemy to a wall and you or your team can secure a kill. I recommend hanging out next to the shock turret, not where you might get stuck on it at a crucial moment, but because you’re like a walking combination of a turret, locomotive and a real tank back there.

You can aid teammates in need in lane, help with wave clear, scare people out of sniper perches easily, grab double thralls when they are available easily, and the wall behind the shock turret gives you a lot of cover when a situation looks dire.

I’ll let Boldur players talk about that rolling rock of a dwarf because i don’t play him enough and when i do, it’s definitely not in incursion. Something something axe toss, boulderdash, i’m sure but still lol

Anyway, you’re going to get focused as Montana, this is just a fact of life. He’s really big, and draws attention. So you’re going to soak up damage. You’re going to die a few times, but you want to make sure you aren’t just taking damage for no reason, and you’re not kill feeding. Here’s how. First of all, this is the biggest thing, (ha pun intended) map awareness and positioning. When i die pointlessly this is usually the reason. I ended up in the middle of the lane, or i was trying to be a hero and run down somebody. One person probably can’t take you down. So they’ll bait you in to the rest of their team waiting around the corner. So attack from the flanks and utilize the terrain (the blocks in the middle of overgrowth, the side tunnels on monuments…echelon well…it’s kind of an annoying map for montana i’ll be frank (i spent more time building and getting thralls here than anywhere else). Never be without your team. Always pop mansformation before you expect to take heavy damage not in reaction to it. I’d say the same for hailstorm but with a caveat, i like being at high heat first before i pop it because slow + max damage = melted faces. Lumberjack Dash stun only when you know you have backup, otherwise save it as an escape, as depressing as it is to have to run. Doing ULTIMATE DAMAGGGGGEEE is fun, but in the long run you’ll be happier running regen gear and a health vest over attack speed and attack damage gear, i have some suggestions if you’re interested in that direction. Don’t ever be a fire pew pew Montana, they all die. Always

Edit: Like @Garrus_Sniper said, Gal is a bad matchup for Montana. The problem i have with her isn’t so much the damage she puts out (in a straight up exchange, i can promise if you’re on target, she won’t kill you first. The issue is she falls back on her shield, you can’t crit her, and you’re such a big lumbering hitbox that she tosses her shield in your general direction and you’ll get hit. It’s pretty hard if not impossible to juke as the big guy. A lot of BB i can jump to the side or over her shield toss. Doesn’t work here. You could LJB her in to a wall, but you’ll want your team around when you do that. Ghalt is well. Yeah. He can easily hook you, it’s hard to gauge where the end of his range extends, and he will win in a straight up damage battle. Again, when he pulls you, you could just smash him in to a wall, but most Ghalts only pull when they know their team is waiting to destroy you, so it’s a wash. Just avoid Ghalt, and if you can’t, put yourself somewhere he can’t pull you without you glitching his hook out. (There’s a spot on overgrowth in the perch where because of your huge hitbox you get hooked but he can’t pull you down (lawlssss)

Hmm. I don’t know how to advise on playstyle. To preface everyone else
Don’t take feel the burn. Just. Don’t
Make sure that you counteract his slow attack speed by shield poking. You tap attack every once in a while and don’t actually do his full combo as it’s much slower than constantly cancelling with shield by holding left trigger and tapping right every half second or so(Rage makes this irrelevant because of the extra attack speed but it’s useful without it)

As boldur I found reliable ways to get kills a fair number of kills but it was because I used his skills for it. Never underestimate the axe throw and boldur dash especially with runes up and with bleed damage

Or go for skill damage

For Boldur. Blue health regen, free shard gen, and blindlebeast will let you tank as much damage as you want while keep the mid shock turret up all game. Stay in front of your minions and walk through theirs. (I can push well with him but securing kills is not my specialty so good question

Voids edge, I THINK advanced but I can’t recall off the top of my head.

I’m sure he’s referring to the Blissbeast Skull Plate (from void’s edge).

I often run it in conjunction with the Emergency auto medic for insane DR and regen.

Oh Yeah, I’m pretty sure that’s it. Damage reduction with health regeneration and more regen if you take 25% damage at once.

I don’t know if it’s “aggressive” but I’ve got a very effective build for Montana I’ve found effective at sitting in the pocket and dishing out some punishment.

Everything about this is Great for Montana. Atk Damage, Shield Strnegth and most importantly (-) Atk damage Buff.
Considering Montana can spray enemies with a shower of bullets, you can mitigate alot of damage that he’d normally take from a # of enemies.

Again, everything about this screams Montana. +Health (ALOT of it!), and damage reduction

I wouldn’t call this an “aggressive” build but boy can you take a beating and come out alive.
I EASILY solo double thralls with this build.

I haven’t tested it yet but I’d imagine Vigilant Power Scouter would be effective consdiering it’s easy to Crit with him. 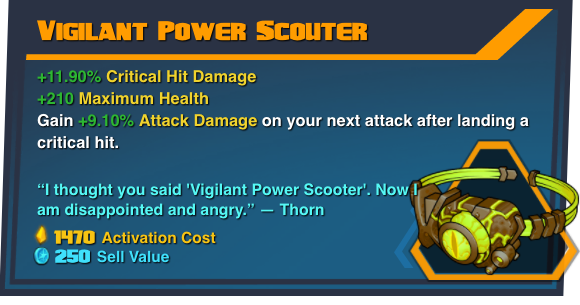 Next of course is helix choices.
I go
1- Left ( great to close distances and escape when necessary), although Right might be better for an Aggressive Build
2 - Middle ( allows to strike and possible stun more than one enemy )
3 - Left ( More health )
4 - Left ( always always always, anything to keep your gun firing )
5 - I go with Right for Health Regen while firing, but Middle again might be ideal for aggressive build
6 - Left ( Shield ), again Middle might be better for aggressive ( penetration)
7 - Middle ( - heat, keep that gun firing! )
8 - Left ( keep that lumberjack going )
9 - I go with Middle usually but Right works great too ( -damage, or +damage during Hailstorm)
10 - Right ( always, reflect damage is way more effective )

Like I said this is what I use and find it effective, is it “aggressive”? I guess that depends, but Montana is made to soak up damage while supplying it. The longer you can hang around, the more damage you can do.

Do what works for you though!

Don’t give them time to shoot you while playing Montana or simply use walls for cover and have a pocket Miko.

Then just remember if you can see them and you have hailstorm active you can probably out dps them. Its really only when the game stalemates on Overgrowth that it becomes hard to stay alive as Montana. Gun characters just spend all their time shooting you and not much else. Unlike on Escheleon or Monuments where they either can’t hit you while camped without coming in knock up range or you can simply hailstorm down the sentry with ease.

Use items like root politest and blissbeasts. As long as you manage your heat properly you shouldn’t have much trouble staying healthier.

Then just remember: just because you have 300 health doesn’t mean they are not going to die before you do.

So why not take Feel the Burn? Isn’t it pretty much necessary over the other options if you do Firestorm Montana (which I practically never do)?

Level 4 was swapped with level 9 mutation, and The Cooler’s original effect was added to minigun by default. The new level 9 mutation is now “increase all healing received by 10%”.

Why do you consider reflect damage more effective? You can nuke a group of enemies if a healer is sticking to you. If not, you’ll prob just have to pray that you don’t die.

Also at level 7… can you reduce more heat by having Hailstorm on extra 2 second duration, thus giving you more time to shoot, reducing heat further? If you took Firestorm, you’ll want Barrel Cooling, though, yeah. Most likely.

Was going by lowlidev for helix so blame him haha.

Rule #1 -Never assume a healer will stick to you unless you’re playing with a friend who is sticking with you. If you have that yeah go for the absorb then release, but it’s risky even with a healer.

Like I said had the wrong helix but those choices are ideal as well.

My philosophy with Montana is to stay alive without help.
Walk in, lay down the law for as long as possible, Rush outta there. Teleport, rinse repeat. Haha

Filthy lowlidev, needs to step up his game /s

Risky but rewarding. I think they’re equal, it depends on the team comp they have. Ranged? Damage reflection, there is no way they’re letting you get over there, even with dash. Melee or territorial? Bring forth the boom.

Best thing for both of them is use their dash to slam people into a wall and get the stun.