Something i came across/cc counter?

HOWEVER - when a coordinated team locks you up in whatever fashion with CC, if they have their act together, you are MELTED AND DEAD within 1-3 seconds.

He does point out one thing that would make cleanse more viable. If it not only removed the effect but also granted temporary immunity to cc. Right now the only cc immunity that I know of is on Ghalts ult at level 10. Cleanse as it is now won’t help someone out of most double stun scenarios. Adding a couple seconds of cc immunity might.

You can run it on Pendles to further enhance his passive but you would probably get better effective returns with max health. It’s like crit damage, there is nothing wrong with it, there are just better options out there.
Yeah it works on stuns, slows and silence, poison dot, wounding, weaken and damage amp. Am I missing any?

I can confirm that chaining slows can be just as bad. It’s a lot easier to do for one. Almost everyone has a slow. They usually have an aoe or something that can hit multiple targets. Shorter cooldowns than stun abilities and some can reapply slow with a single skill. Kelvins slow focus build is kinda underrated imo.

maybe because trading an mass stun for an mass slow has less value? having such a mighty stun in the hands of an coordinated team is priceless, even more if you count in that slow’s do not cancel ultimates and escapes, stuns do, and given the right circumstances he can cancel them all at once, which definetly can turn the tide

I just hope this game doesn’t do a 180 with all the changes. Taking feedback and stuff is good but it can lead to some very undesired changes at times like… Benedict buffs and que changes. I guess I’m mostly wanting/trying to say is Gearbox needs to have more confidence in their decisions while also taking our feedback with a grain of salt.

HOWEVER - when a coordinated team locks you up in whatever fashion with CC, if they have their act together, you are MELTED AND DEAD within 1-3 seconds.

You are right that, in this specific case, Diminishing Returns wouldn’t do much.

But, to be completely fair, if you’re getting blitzed by an entire team by yourself, you’re probably not going to live regardless of what cleanse or DR you might have affecting you.

But then you open up a whole other can of worms - while there may be ways to fix chain CCs or reduce them, nothing will really stop a team that knows what they’re doing. Unless CC just becomes completely obsolete.

If you compare just those two helix options together than yes it is better to keep the stun and add speed. Kelvin has other slows and options that increase his damage to slowed targets. I’m not trying to argue that slow on sublimate is better. I’m just saying that there is a viable way to build him other than what I see people use all the time.

true, but it’s (imo) as viable as “damage” miko’s or alani’s waveride, it’s fun to see that pple play some characters different, but trading in such potential for diversity isn’t as effective as the “meta build” for them, there’s mostly a reason why certain helix choices are more popular than others

You are just being argumentative after I said I didn’t want to argue about it and you are shifting focus from my point and bringing up something that is not only irrelevant to the point I was trying to make but also has been discussed thoroughly before. Kelvins “potential” is partly because of his “diversity”. He has a bloated kit and like others that have a bloated kit, you can build him different ways.

I will say it again just to be clear. I’m not saying that the stupid snail trail is good! I never said “use slow on sublimate”.

you said there is a “viable” way to build him this way, I just stated that’s it’s not.

What way are you talking about?

I’m just saying that there is a viable way to build him other than what I see people use all the time.

this is what I’m referring to, if I misunderstood you than I’m sorry, just clarify where I lost you, no need to get offensive

I stand by that statement. I don’t think that there is just one right way to build him. The better choices can depend on who you are fighting and who you are teamed with. If you have a kleese on your team it might be good to focus on his passive. If they have a kleese on the enemy team not so much. Go back and read my posts again. I think maybe you were reading too much into it or making assumptions.

I believe @vrlalilulelo read “There is a viable way to build him” as in there is only ONE way to build kelvin. I too read this as “ONE way to build him” (Though I knew what you meant but quite a bit of people read everything literal, which isn’t wrong) I don’t mean to spark this little debate once again though I just wanted to clear this up because WE ALL know everyone reads text different than what it was intended to “sound” like. Anywho, I really enjoy how there was quite some feedback here. I too hope the CC meta is reduced , my suggestion would be GBX can always add new characters who have abilities that counter CC (these characters would be support characters)//This way we have NEW content and REDUCE the CC meta.

yeah slow chaining suck too, But…

The problem is that stuns are significantly better than slows, so if there was diminishing return for all CC then a KU slows someone for 2 seconds and if they get 50% diminishing return for 5 seconds then if Gal throws her shield at someone and it only does a 1 second stun then her stun that could of killed someone is basically useless because it’s only a 1 second stun.

So I don’t know how they would do diminishing return for CC other than just stuns without making it so characters that have passive slows are actually hurting their own team-mates by giving the enemies reduced stun durations.

Coming from an Incursion player, I don’t think slows are nearly as bad as stuns since u can use ur skills to get behind your ally line to safety, so until someone figures out a good way to incorporate slows into diminishing return I think just using diminishing return on Stuns and Knock-ups is a viable way to reduce CC meta.

As you said, just set it up so slows aren’t really effected by Diminishing Returns.

Generally, when it came to WoW, there were two categories of CC - hard CC and soft CC (which sometimes wasn’t even considered CC at all).

Hard CC would be any sort of ability that stopped an opponent dead in their tracks, while soft CC was, basically, everything else.

Stuns, Alani’s bubble, push backs (when hit into a wall) could all be considered hard CC. This is what needs to have diminishing returns applied to it.

Soft CC would be your slows, or abilities that didn’t really have a lasting effect on your target. These could have diminishing returns, but probably would not need them.

Perhaps, where slows are concerned, they can have their own sort of diminishing returns - what if a player’s movement speed can not fall below a certain point, regardless of how many slows they’re hit with?


Sorry just saw this movie with my son and now it’s stuck in my head for a few days. But jokes aside; English isn’t my first language i do know i make mistakes but i don’t always see them. Send me a PM so i can improve the article and myself.

[quote=“beta382, post:4, topic:1559716”]
this article is just a compilation of things the developers have mentioned in passing on these forums.There is nothing new here. [/quote]
That is indeed the case and yes if you spend time here on the forums you might have seen those posts. This article has been sitting in my unpublished posts section for a while due to various reasons. However not everyone spends all their time looking for new info. Back when Battleborn was in development I noticed that not everyone was finding these intel sources. So what’s common knowledge for you might not be the case for someone else. Seeing my article being pointed out is just more proof of that. This article got posted because of another article that’s basically a summary of things that GBX are working on/looking into. With the recent comments about the lack of hotfixes i felt the need to point those out as apparently not everyone is aware of those. One of these things is the cleanse, but this topic needed some more explaining and therefore could use it’s own article.

I remember an interview with Randy i did last year and we talked a while about game design. Randy mentioned a general comment about GBX needing to fix a issue; “it’s easy to fix, you just need to do this”. But the answer is never easy, there are a lot of systems in play you have to account for. Everyone here in the community has an opinion and i think that’s also one of the reasons Randy has been dropping hints. To get you excited and a discussion going and that’s also what my article is for.

Cleanse is not a new ability. It has existed in the game since release as a Reyna level 6 mutation.

Currently Cleanse is more like the wound effect when it was only available on Galilea. In my perception the idea was that GBX would look into making the cleanse ability more widely available like they did with the wound effect. I believe it was mentioned that they would look into making cleanse a default feature of the overshield instead of being a mutation.

The “cleanse” on Beatrix’s fulminate could get the same treatment as GBX is doing with the silence, where a minor effect has a stacking ability (each projectile adds about .3 – .5 seconds of silence) 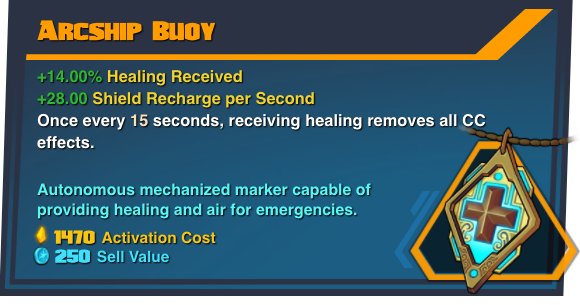 The only gear i can find with a cleanse like ability is the arcship buoy. however i do find this piece of gear circumstantial as you would need to be healed in order to benefit from the cleanse feature.

Randy mentioned having gear that protects you from 1 type of CC. This way with how gear works you can’t overlap multiple of the same immunity types. But i’m not a game designer and we don’t have access to the big data.