the girl with maya

and if its been 10 years since the 1st the girl looks to fit that age. now if angle died five years ago then that means there should be a 5 year old too
witch leaves me with this

the 6th siren oooooo I think

I think he/she is not a siren

So this is the kid in the mask of mayhem trailer. [borderlands-3-screen-05-ps4-us-02apr19] looks like a villain to me.

I’m uncertain if/how the girl Maya is tutoring is going to be a Siren. I’m not seeing tattoos, but it could be something you mature into.

The last girl showed up in the release date trailer for a moment. 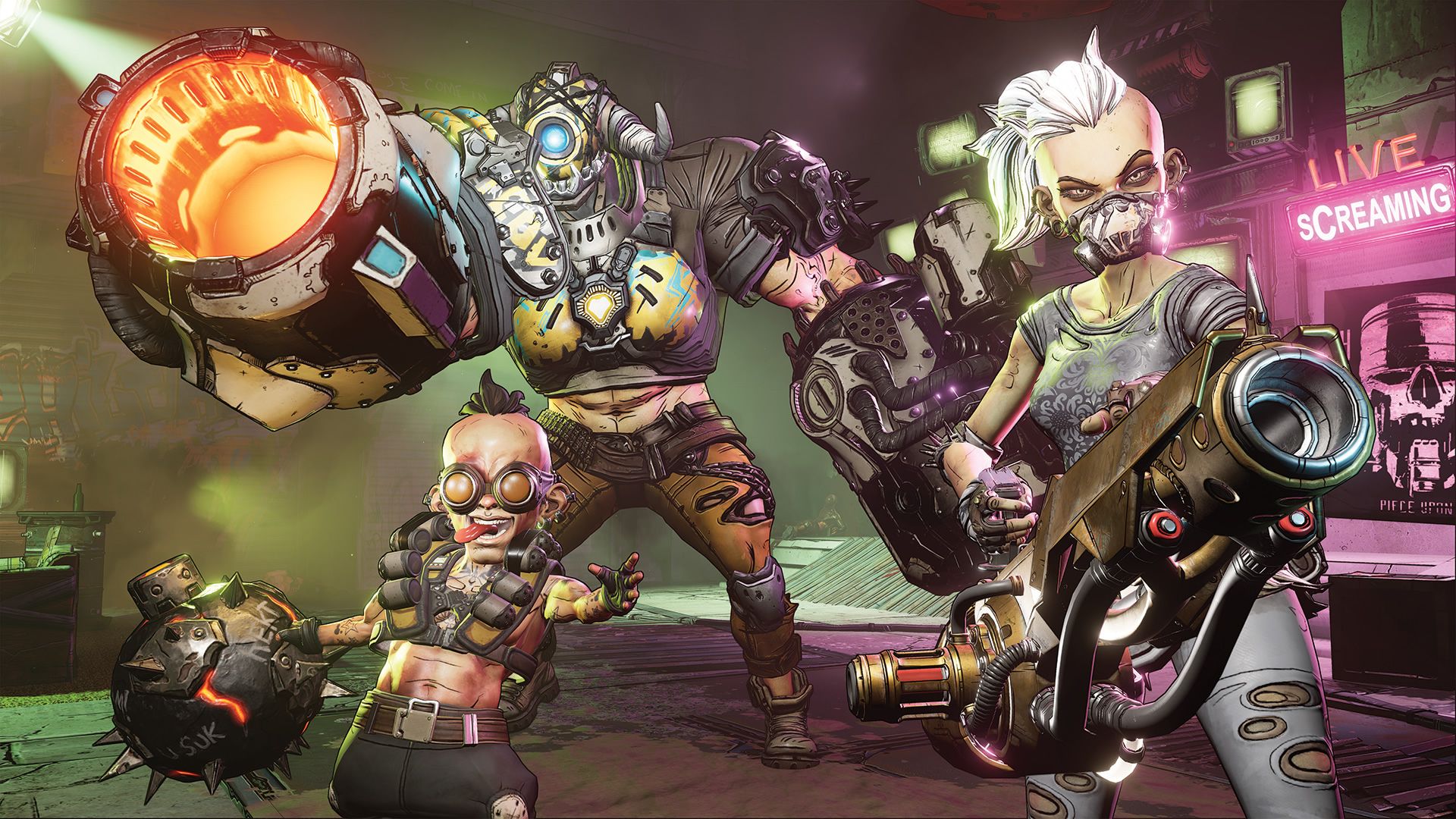 She’s dressed differently and her hair isn’t in the same style.
Again, no tattoos, but I’m figuring this lady won’t gain her own Siren powers, I don’t think she’s a Siren.
The wings in the Mayhem trailer definitely do seem Siren-y, but let’s assume it’s been about 5 years since BL2. Steele died 5 years before 2, so it’s been maybe ~10 years since then. 10 years for a new Siren to grow up. Angel died ~5 years ago. I’m not seeing any 5 year olds in the trailer.

Again, this is assuming it’s been ~5 years since BL2 and that new Sirens are born when old Sirens die. Who knows?
I definitely don’t.

I don’t think there’s any reason to conclude that the kid with Maya is a siren.

Again, this is assuming it’s been ~5 years since BL2 and that new Sirens are born when old Sirens die.

In the Tiny Tina DLC, Lilith mentions being bullied for having tatoos when she was a child. According to Maya’s bio on the Borderlands Wiki, it seems she was raised as a Siren by a group who wanted to exploit her powers for their own power seen in her ECHO logs.

Certainly, it seems like the most logical explanation. Sirens are born, but as soon as one dies, a random girl becomes a Siren, I guess either in childbirth or perhaps in conception? So like others theorise, Steele died 10 years ago, meaning that the girl Maya is with could be a 10 year old Siren, and that there is a 5 year old Siren somewhere out there after Angel died.

I’ve always wondered about the Sirens in the Borderlands universe, mainly about how everyone knows Sirens exist, and how everyone also knows that only 6 can exist in the universe at any given time. Certainly though, it seems like Sirens are going to be a massive focus in BL3, and we might find out the identities of the 6 Sirens currently alive. It seems like there is something weird about Tyreen though considering she seems to absord Lilith’s power, which makes me wonder if she isn’t a Siren but maybe has some sortof other alien ability that effects them?

The only downside I guess is that it seems like we are running out of Sirens to be able to play as. I’m sure I read somewhere that apparently at some point in the past, there were meant to be 13 Sirens in the universe but it got changed to 6. Honestly, I wish that was the case, so that we could always have some unknown Sirens so that there can always be one for the next game.

The question on my mind is this.

There can only be 6 sirens in existence at a time. However does that actually mean a baby can be born with siren powers when 1 dies, or does someone already born and alive go through some type of awakening where the tattoos manifest on their body and they discover they have powers? It may just be a matter of needing to still be a child but may not require it to be an infant.

As for the kid with Maya in the teaser. My first thought was wondering if that was Pickle’s sister from TPS.

Pickle does have an older sister, but she was at least 16ish or so back then. Also, I don’t think their parents are around anymore, I think they died in the Crackening. So. It’s unlikely he’s going to have any more siblings than the one he’s got.

we know of Commander Steele as another siren (died) and there might have been some mention of the other sirens via the comic book of the Origins.

Here’s a twist. Maybe Tyreen isn’t a Siren either. Or rather, she wasn’t one of the six. I’m guessing the reason everybody knows is because of an older (centuries, probably), off screen vault caused it to happen, or maybe one of those future seer eridians told them there were six. But maybe it’s six per siren artifact. And the team of 6 just happened to be all women, soul when the power reincarnates, it’s always a woman. Now, back to Tyreen and Troy. Let’s say they found the same/a similar vault. What’s to say they didn’t trigger siren powers for themselves? Hell, probably the reason other people didn’t do so is because, like the vault key, it has a timer. Say, 1000 years or so. And THAT is why war is coming. the timer ran out on the siren vault and the twins found it and used it.

There was a Siren that net with Lilith, then passed away. So if Sirens are active from birth that would put Lilith, the one she spoke to in the comic, Maya, Steele, Angel, Amara, and Tyreen all active at the same time, for a count of seven total. If powers are transferred at death to someone already living, then the six Siren limit can still hold, but everyone previously mentioned is too old to have received the old Siren’s powers at birth when she died.

Are the comic canon by the way?

nope. in fact, they’ve been specifically said not to be. But let’s say they are. That old dead siren most likely became Angel, since she was a few years younger than Lilith, who was a child herself at that time.

Any of the new female characters in the trailer could be a siren, even if they do not have the tattoos. One of the villains appears to be able to steal siren powers, so we should assume that you are on a quest to, at least partially, restore the powers (and tattoos) of someone.

Yes, quite right. But did anyone state or make it clear that all six sirens will appear in BL3?
If I’m not mistaken, the BL games up to now had a maximum of three sirens per game:

While every new female character could be a siren, it is afaik not guaranteed that every siren in the universe will be part of BL3. But maybe I missed something.

So they aren’t a Siren.

6 sirens, and someone who have acquired destroyer powers, I assume. Referencing my theory that the Destroyer in BL1 was just a host that holds destroyer powers, that would have let the power free to find new host, since original vault hunters killed him in this dimension.

But if it held destroyer powers, they would’ve have been released until maybe after the TPS? The Destroyer’s eye was around as Hyperion’s giant laser cannon, and it still seemed very much alive.

Kid’s left arm is covered up, so we can’t tell. Admittedly, most of the Sirens we’ve seen have bared their left arms, so there is reason to think she might not be a Siren, but without actually seeing her bare arm, we can’t say for sure.

Also, something I missed during the Reveal trailer was that when Lilith is on the ground crawling towards the Vault Key, her tattoos were gone, so just because someone doesn’t have tattoos doesn’t mean they’re not a Siren. Given that the kid isn’t on the ground (I don’t imaging losing something like that is easy on you), I can personally see her not being a Siren as a viable theory. Just pointing out we don’t know for sure.