The real problem with battleborn - no money in advertising

They didnt advertise . . . at all really
I still see banners for Overwatch EVERYWHERE on sites and I’m sure blizzard pays off sites like giant bomb and kotaku to just plaster its heros everywhere.
Who gives 2 ■■■■■ about someone with the lowest rank in Overwatch! Meanwhile news about an amazing game gets a " in case anyone’s interested."
they have an amazing game game with a story, background and damn decent gameplay that is rebalanced weekly from players input but they didnt advertise man. 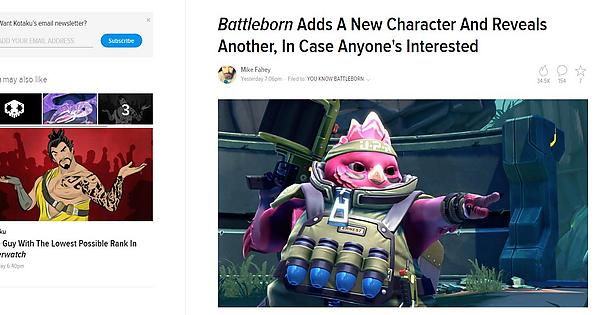 2 million people played the beta. so it isnt like the game slipped under anyone’s radar if he was half awake. but then PC sales shortly after release were horrible, by all accounts, and we havent heard anything that leads us to believe console sales were the tits either.

still the game started with 12k concurrent players in PC, which while FAR from amazing should have been more than sufficient to develop a stable, healthy playerbase…it tanked within a month. plummeted into the ground. actually I think it lost 3k (25%) just during the very first weekend it released.REKT

the problems of the game are not marketing. its the game itself.

And then there was the Humble Bundle. it was more like a quick shoot up of a hundred thousand sales, and several thousand concurrent players, in a matter of a week.
4 weeks later it has plummeted to figures below pre-HB. We are at ~600 peak players right now.

And while consoles might not have deteriorated so hard and so fast, the off hours and the low quality of matches lead us to conclude they arent exactly teeming with players either

all the marketing in the world could get you 500k fresh new players, and still the game would manage to lose them all within a month

once again, for emphasis:

the problems of the game are not marketing. its the game itself.

All this stuff has been discussed at great length in other threads.

I don’t see much point in another run at it.