Ok, let’s get right to it. This is a Jacobs shotgun build! Depending on how powerful Violent Momentum can get, we might be seeing a new Deputy in town. 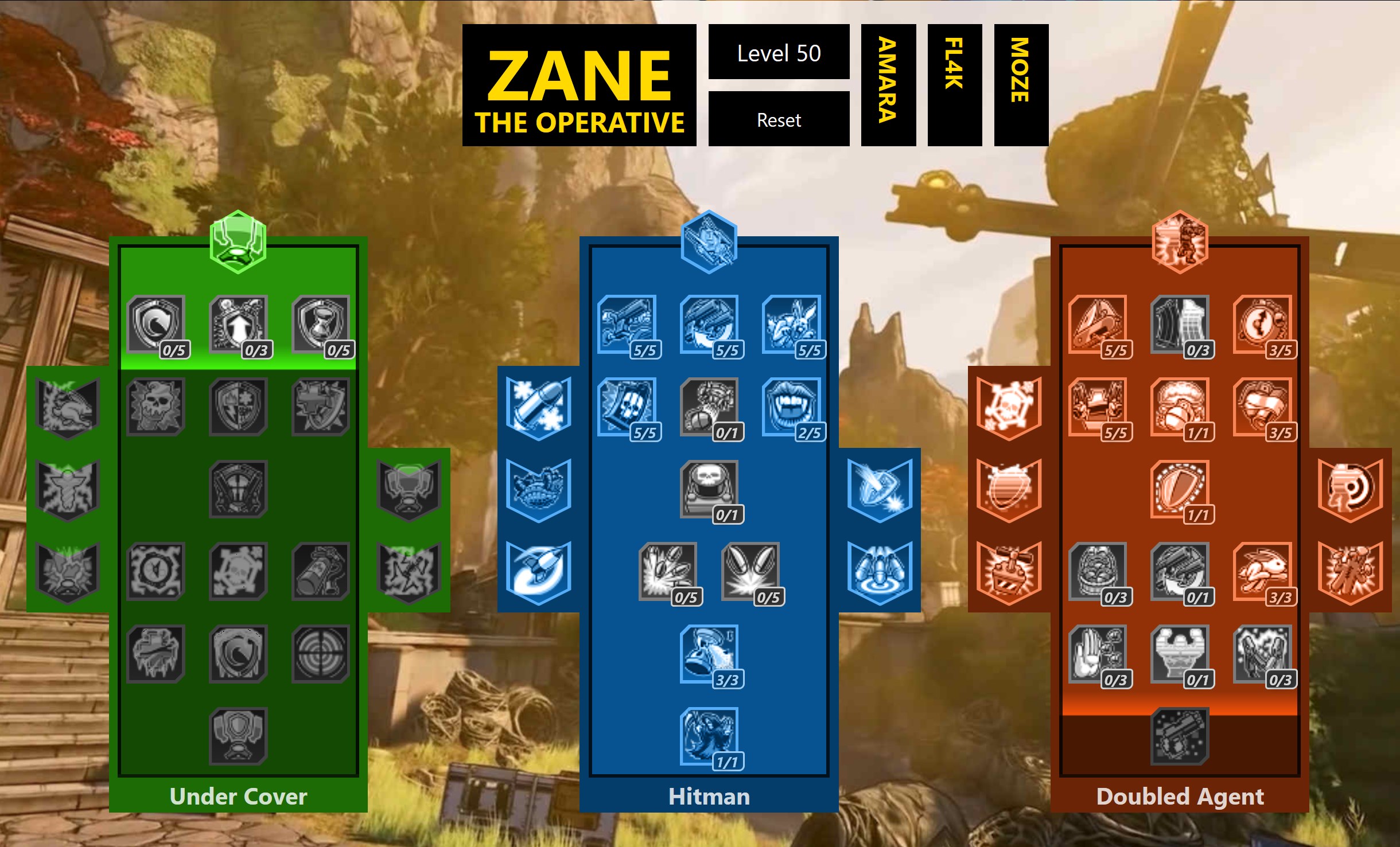 The key to this build is Violent momentum, Supersonic Man, and Good Misfortune together. With all three of them and Clone + SNTNL active, we’re going to be as fast as possible and thus get the most gun damage boost possible while moving. Since moving and aiming will not be easy, we want to put out the most damage in the least amount of time. I.E, we want high burst, not high sustain. A set of two double-barrel jakobs shotguns will keep us firing quickly without needing +Fire Rate skills to amp up DPS. Cold Bore means that we can swap weapons and get a cryo damage boost on the shotguns. SNTNL should be in radiation debuff mode, for the bonuses to us and the extra damage on enemies. We’ll use the cryo nova modifier on the clone to keep freezing enemies as much as possible.

The name of the game is high burst damage. Add it all together, and while moving we should have +64% gun damage (with both skills active). Our movement speed should be +53% with both skills active and our kill skills up…how will that play around with Violent Momentum? Time will tell, but it could be a massive boost to gun damage. Dash in, unload the barrels into an enemy, swap weapons while strafing and unload your second shotgun for a big cryo splash, then dash away. Now reload your weapons and enjoy the health regen from Donnybrook. Oh yeah, you’ve got a drone and clone attacking enemies for you as well!

Hopefully, we can get class mods to boost supersonic man, violent speed, and violent momentum to take us way beyond Maya with the rough rider. A deputy’s badge-type buff would be great for our shotguns as well

Hitman:
Violent Speed 5/5: +20% movement speed when killing an enemy.
A core skill, boosted by Death Follows Close and should translate a good portion of its numbers into violent momentum.

Cold Bore 5/5: +75% weapon swap speed, after swapping weapons get +30% damage cryo shot.
I looove swap speed. It lets you adapt to different situations. Since we can carry two shotguns, we can swap between them to get repeated cryo bonus damage when necessary. Maybe this skill isn’t THAT useful…we’ll have to see.

Violent momentum 5/5: Gain damage while moving, +30% gun damage while walking AT NORMAL SPEED.
THE skill of the build. Boost your movement speed, boost your damage. Sprint up to enemies, unload a couple shots in their face, then reload and sprint away. If speed scales with damage, then +50% movement speed might make you do +50% damage, or it could be +15% damage (half the skill). It will be interesting to see how it works.

Good Misfortune 3/3: Killing an enemy increase action skill duration by 15%, has diminishing returns.
Another key skill. This SHOULD be boosted by DFC as well, and it will let us keep the clone-n-drone out forever, even with diminishing returns. 15% a kill is quite something!

Death Follows Close: increase duration of all kill skills by 4 seconds and effect by 40%.
An amazing capstone. This should keep the movement speed and reload buffs going forever, thus keeping our damage up. Note I believe it also boosts Donnybrook, which will keep us alive as well. What else do you need?

Doubled Agent:
Syncrhonicity 5/5: Gain 10% gun damage per active action skill
Always-on 20% gun damage with both our skills is nothing to shake at. That’s approaching battlefront levels, and this is tier 1!

Borrowed Time 3/5: Increase action skill duration by 20% per active skill.
+24% duration before extending it? Actions skills for dayyys. This is so much time that it’s not even necessary to have 5/5 points in the skill, since we extend our skill time for each kill.

Donnybrook 5/5: After killing an enemy, gain 10% gun damage and regen 2.5% health per second. Note, this is a kill skill!.
Another absolutely key skill. 2.5% health regen per second is fantastic, and should get boosted to 3.5% with DFC. This will keep you alive.

Fractal Frags 1/1: When spawning clone, it throws a free grenade. Every time you kill an enemy, get a 30% chance to thrown another free grenade.
Since we can’t throw grenades ourselves, let’s let the clone do it for us. Imagine a quasar! Spawn the clone, suck everybody in, then teleport to the clone and wipe everybody out.

Duct Tape Mod 3/3: The first bullet fired has a 15% chance to throw a free grenade.
Going between this and Borrowed Time for the remaining points. Since we’ll be reloading often, we can get lots of free grenade chances.

Supersonic Man 3/3: Gain 12% movement speed per active action skill
Another key skill that enables the center of the tree to do its work. “always-on” 24% movement speed, which will translate into more survivability and gun damage through violent momentum? yes please.

What aren’t we taking? For one, grenade buffs. No way to use them with two skills. We don’t need the fire rate bonuses in Hitman, since the magazine on jakobs shotguns is so low. 3 points in his magazine boost skill likely won’t give us enough to get an extra shot, either. Well, if Playing Dirty clones the projectile instead of being like Two Fang, then it might be worthwhile, but otherwise I think the points are better spent elsewhere. We also aren’t getting any shield or survivability skills, or cooldown for that matter. Hopefully, moving around should let us stay alive, and Donnybrook’s health regen should let us heal through most damage. We don’t need cooldown, since our skills will have such massive duration that hopefully we can kill every enemy by the time we’re through. At +24% duration and +15% per kill, we should be able to keep it up practically forever, until the bonus from Good Misfortune runs out.

This is the exact same build I had in mind except I do put points into Playing Dirty. It’s the perfect skill for doubling the burst damage of shotguns, especially if class mods can make it 100% guaranteed.
Also the idea of swapping between multiple shotguns for Cold Bore cryo bonus is fantastic.

Especially with all his cryo benefits on the drone n clone, it will boost the shotgun damage even more. Jakobs critical boost+cryo critical boost + reflected shots on crit=lots of dead enemies

Violent momentum does seem to have the potential to be a Zane damage keystone skill. I hope it’s not his only one, though! Duct tape mod seems promising. I wonder how gravity will affect shot (as opposed to thrown) grenades?