The X guide to farming LOOT

Welcome to the X guide to Farming LOOT, written by your meaty friend Krieg the Psycho X and especially made for the people who is new to the Borderlands 2 (BL2 for short) loot world. But we must start with something basic.

SOOO…WHAT’S THE DEAL WITH FARMING AND BL2?
This game is based around loot. You find items that help you progressing as I previously said. Those items can drop from enemies, pop out from boxes and lockers, being quest rewards and a pretty long etcetera.

I STILL DON’T GET IT
You kill someone, BOOM, a beam of light indicates that the enemy dropped something. You open a box, BOOM, you get an item. Every corner of the game has a potential of dropping or popping something nice or just plain crap.

GOTCHA, HOW DOES IT WORK
The game is based around numbers. Yep, NUMBERS. The game itself has a thingy called “Random Number Generator” which determines what kind of loot you will get, but I won’t go deeper on it since A) numbers make me go rampage and B) @VaultHunter101 made a guide about it, here’s the link

Vault Hunting 101: A Guide to RNG and LOOT! Discussions of any Borderlands game invariably include a reference to the capricious whims of the Random Number Generator (RNG) at some point. This is usually in the context of how hard or easy it is to get a specific item, or the standard waiver that “random is random” (RiR). Such discussions equally invariably involve claims and counter-claims regarding how the games RNG works, or how it can itself be “gamed” to encourage the desired result. This g…

Hang on, my young Padawan. We have some topics to cover after we go to the facts. I’ll be pointing each one in a detailed way.

#The Rarity Scale
If you just started playing BL2 and don’t get why the weapons have light beams of different colors, this is the place where you’ll get the explanation. Loot is divided by rarity, each one of them with a specific color which determines how rare is the weapon, here’s an example

The rarity may not be in order in the screenshot, but follows this pattern (lowest to highest tier)
White->Green->Blue->Purple->Magenta->Orange->Cyan->Pink
The higher, the rarer. This means, you can see whites and greens dropping like candies, but not orange and cyan weapons. Pink weapons are a completely different stuff. Grey, red, yellow are reserved for ammo, insta-health vials and money. Purple is also used for eridium ingots and DLC2 Torgue tokens. Pink is used for seraph crystals, dropped from UVHM raid bosses.

##Pearlescent weapons
Pearlescent (cyan) are essentialy DLC weapons. The first batch of pearlescents was added when the game cap was raised from 50 to 61(UVHM1) and the second batch was added when cap was raised from 61 to 72 and the Overpower levels were added as well. The first batch of pearlescents can be found almost everywhere (if you’re lucky enough) but not the second one (they drop from a specific kind of enemy). It should be possible to see them in vendors, but nobody has seen a pearl from one yet. Also worth noting, pearlescent weapons can be obtained in NVHM and TVHM only on the Tiny Tina slot machines.
Aside that, there is one source that drops a guaranteed pearlescent (first batch though) when killed. It’s an enemy called “010011110100110101000111010101110101010001001000” (whose name translates to OMGWTH) in the last part of the Digistruct Peak challenge (from Overpower 7 to 8) and has the honor of being the only enemy in the whole series to do that.

##Seraph items
Seraph items were added when the first BL2 DLC was released (Capt Scarlett) and then, the following 3 DLCs (Torgue, Hammerlock and Tina) also added new weapons to the already big loot pool of the game (if the vainilla game announced 87 gajillion of weapons, with the new additions this number was stupidly and insanely ridiculously ■■■■■■■■■■■■■ -ly increased to almost 4x (or maybe more). These weapons are weird, because each DLC has its own vendor that sells this stuff, which requires seraph crystals (getting the latter being the hardest part since they drop only in UVHM from Raid Bosses or can be won in the Tiny Tina slot machines in NVHM and TVHM) or can be dropped by on-level raid bosses as well. We should not talk about “Seraph weapons” since this category also cover shields, relics and grenade mods.
https://forums.gearboxsoftware.com/uploads/short-url/vB9vXMPF5QSRigrRaWbw9dyPJk1.jpg

#The Loot Sources
Everything in this game has a potential to be looted (or killed then looted xD). Enemies, garbage piles, lockers, boxes, chests, EVERYTHING. The odds are determined by RNG, yet not all sources can pop with shiny stuff.

Almanac of every loot object in Borderlands 2 Loot and Weapons

Red weapon crates, lockers, Dahl green garbage containers, cardboard boxes, garbage piles; skag, bullymong, spiderant, varkid and stalker piles plus stalker pods can spawn legendaries or pearlescents. Even the standard enemy (badass or non badass) can drop this kind of weapons. This is what we call a “world drop”

Loot midgets are midget (d’oh) versions of regular enemies which have more health and are able to deal WAY more damage than their non-midget counterparts, can down a VH pretty quickly if he or she is not aware. They usually pop from boxes, lockers, garbage containers, ammo crates,even from garbage piles; and they do it in an unexpectedly way, so they kinda ambush VH’s. They’re considered badass enemies and drop quite nice loot when killed, risk and reward farming. They are “x Loot Midget” in NVHM and TVHM, and “x Legendary Loot Midget” in UVHM and Overpower levels. They can drop “almost” everything: orange and cyan weapons (first batch: Butcher, Avenger, Tunguska, Stalker, Storm, Unforgiven, Bearcat and Sawbar), legendary class mods (first batch), grenade mods and magenta relics (only UVHM). They can’t drop: Norfleet, Longbow, second batch of cyan weapons, second batch of class mods, shields, seraph items and DLC legendaries (Ogre and spell grenades).

I didn’t included Jimmy Jenkins (or J3NKN5) because that thing doesn’t drop anything nice, yet by some weird reason, is still considered a loot midget. Anyway, here’s a pic

Loot Midget Marauder (the most common)

The rare as ■■■■ loot midgets (they spawn only in Sawtooth Cauldron)

Tubbies are enemies with serious obesity problems that have a pretty weird body, usually bigger and fattier than their standard version, they drop the second batch of class mods (Legendary Reaper, Torch, Sickle, Nurse, Binder, Catalyst…) and both batches of pearl weapons (all those that loot midgets drop, plus the Bekah, Carnage, Wanderlust and Godfinger) in UVHM starting at level 62, the Cracked Sash and the Whisky Tango Foxtrot shields and the legendary rocket laucher Bunny. Tubbies can deal, as loot midgets do, high damage to the vault hunters and also are considered badass enemies. 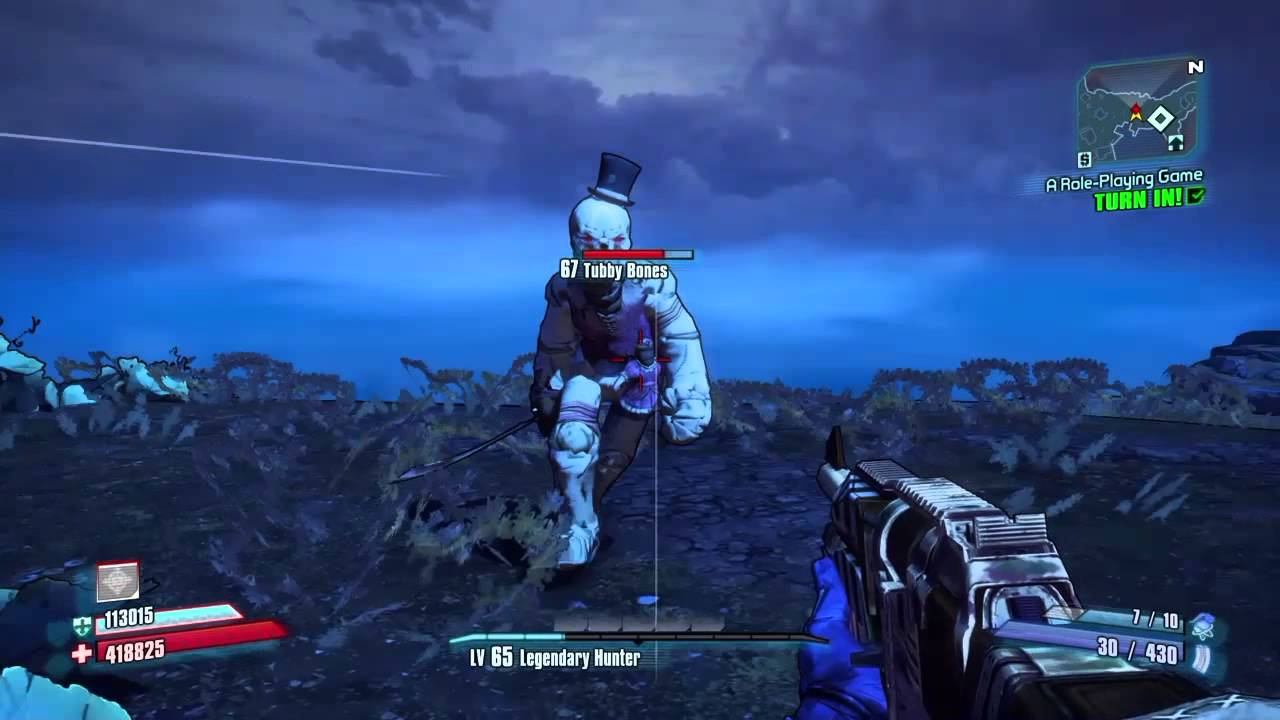 Unlike BL1, most of BL2 bosses have a determined drop. Most times it is legendary or unique and takes a certain amount of runs. It used to be a 1 in 30 ratio, but now it is 1 in 10. Despite that, some bosses drop their legendary pretty often or pretty rarely, despite these ratios. Here’s an exhaustive list of EVERY boss and their legendary/unique drop according location (WARNING, POSSIBLE SPOILERS)

End of the Line

Vault of the Warrior

##Seraphs
In NVHM (first playthrough), great part of the items are availiable at vendors in DLC1, 2 and 3.

Quest rewards worth farming by @Chuck80
Lootology 101 with all the info you need
BL2 O.T.D.H. Loot maps, nice maps showing all maps and their bosses and chests

Here it is. I expect this guide to be useful to everyone, new and not so new people. Anything, let me know please

Yep, fixed that. Thanks.

No problem. Not to get too picky, but, FWIW, the post could really use some proofreading. Just a couple of examples from near the beginning – “the people who is new” and “it’s exactly the same stuff I’ve wrote”. I kind of hate to even bring it up, but I found it fairly distracting at times.

Also, I think the definition of farming could use a tweak. I don’t know the “official” definition (if there is such a thing), but, in my mind, farming involves repeating some action (killing a boss, checking vendors, opening containers, etc.). You can also get helpful items just in the normal process of playing the game, which I don’t consider “farming”.

Criticisms/Suggestions aside, nice list. It could be very helpful to newer players.

You have the Black Hole listed as corrosive, and the WEP entry doesn’t mention Tubbies in the Legendary section. Considering the intended audience, maybe spell out what a world drop means?

pearls in BL1 had appeared in vendors one or two times

You have the Black Hole listed as corrosive

and the WEP entry doesn’t mention Tubbies in the Legendary section.

Considering the intended audience, maybe spell out what a world drop means?

I remember seeing a screenshot in the old forum showing a pearl in a vendor…
Anyway, fixed that part.

Thanks to all of you guys

A few more notes:
You might want to mention that pearls normally only appear in UVHM, although the first gen pearls can be won in the Flamerock slots in Normal and TVHM.

You can win Seraph crystals from the Flamerock slots in any mode.

As I recall, the Crit’s rarity was changed and it’s blue now. Old ones are still purple, but new ones will be blue. I think.

Fixed all of that.

I need to do some banners for this thread, but probably I’ll do that later.

I may be wrong but isn’t the madhouse fire only?

no, can come in all elements plus the non elemental one
the fire locked is the sawbar (pearlescent)

Ok I knew about the saw bar being fire locked it just ever madhouse I’ve ever seen/owned has been fire lol.

I haven’t seen too much Madhous! to be honest, all of them either non elemental or fire

It’s not exactly a great gun. But great guide either way.

[quote=“Piemanlee, post:19, topic:1172637, full:true”]Maybe tell which items are one time farms like the bad touch and stinkpot[/quote]I believe the Pot O’ Gold is also a one-time drop? This is good info, as it’ll change the farming method.
For the Deadly Bloom entry, the town is Overlook (although Overlooked is rather apt).
I don’t see the Orc mentioned?