Things you wish didn't wear out

So, there was this thing that I had that wore out recently, and it really bummed me out. Now after replacing my earphones, it has come down to having to order an old pair over the internet. By golly, is this not what I signed up for!

So, tell me people: What things do you wish didn’t wear out?

Games. Like old Super Nintendo games. The cartridges barely work anymore. I have to blow on them and dust them with q-tips and stuff for like an hour before I put them in anymore. HOW AM I SUPPOSED TO PLAY YOSHI’S COOKIE WITHOUT THE CARTRIDGE?!!

Might I reccomend against blowing them if you can. Tends to be damaging overtime. So studies come up with.

You may want to consider cleaning your connector inputs in the console itself with some 90%. Of course, the cartridges themselves need the same treatment, a quality cleaning will reduce effective wear and oil buildup; and defeat the need to blow on them-- which is widely accepted to be detrimental to the health of your cartridge In general anyway.

I’ve cleaned up my N64 and NES with excellent results. Games sometimes call for a supplemental cleaning too, though, a clean console is far more important.

Also, I wish my favourite socks never wore out.

The thumbsticks on my 360 controllers. Always end up swaying right or left. Always.

Oh, my, Kitty. You touched on a soft spot there. N64 joysticks have such short life spans. It’s easy enough to replace them, but still… The joysticks of my 360, PS2 and PS3 have held up quite well so far. The controller that came with my first Xbox has needed plenty of help, though. Sometimes the joysticks need to be re-calibrated, and the cable has needed to be soldered back up a couple times.

edit: Oh, wait… I’m thinking of cat brushes… Haha. My grandma used to replace the carpet on her cat scratcher-- not to imply my grandmother used it for herself…

The N64 controllers are bigger offenders, but since I dont have my 64 anymore, Im left to complain about my 360 controllers. Which Ive had no luck with.

Sadly you’d need to be a laser surgeon to replace one of those gizmos. I don’t even know if you can. Looking at the board indicates little about ease of replacement.

What kind of claws does your cats have!?!
My friend have had the same scratch pad for her cat for years… 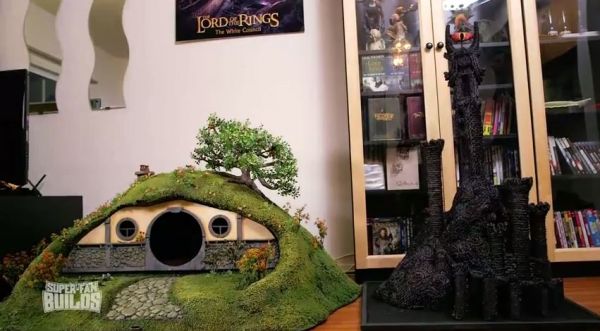 Lord of the Rings Litter Box and Scratching Post

Tim Baker and his team of master prop builders can make anything. They've got the tools, the materials, and the skills necessary to create unique collectibles that will make any fan squeal with delight. That's why their show is called Super-Fan...

I use Q-tips dipped in rubbing alcohol and rub them gently along the connector inputs, both inside the console and on the cartridges. I’ve been taking care of it since I got it way back in the 90s, and it still plays pretty well, but when even that doesn’t make a particular game work, I just blow on the sucker and bam, works fine.

Similarly speaking, a lot of people say smacking things never works, but it’s never failed me. When the soft touch fails, an open palm smack to the side of something usually makes it work. I’ve never hit a console before, but I have slapped the old-fashioned cube TVs before. All that said, I’ve seen a new console that’s supposed to play ‘retro’ games, and by retro I assume they mean cartridge games. I wouldn’t mind getting one of those. I’d just have to clean the cartridges instead of the whole setup each time. Do you know hard it is to get those antenna hookup adapters to work on a modern TV? Of course you do, you probably have one, too. It’s a pain in the ass, man. It’s hard to screw those things on.

@Kitty_Jo: F***in’ 360 controllers DO wear out easy! My god, everything about the 360 is fragile. I’m on my 3rd 360, the first one being an old white model that still works for the most part, but doesn’t read discs anymore and is generally a pain in the ass to open, and the second one was a ‘slim’ model, its fan died and it kept overheating, so when I sent it in to be fixed, they just sent me back my current 360 because apparently there were some problems with the last one.

My latest 360 has held up just fine, but I’ve been extra careful with it, so no shock there. It’s just that the stupid joysticks are garbage on 360 controllers. I have stick drift on four of the five controllers, and the last one, while it has no drift, does have a sticky Guide button and a squeaky right trigger. I know squeaky triggers aren’t as big a deal as triggers outright not working, but in any game that makes extensive use of the trigger, like any shooting game ever, such as Borderlands 1, 2, and TPS, it’s really irritating.

So hey, I’ll agree to hating how 360 thumbsticks crap out after a few months. First time it happened, I was playing NG2, and Ryu just suddenly started slowly walking away when I was taking a drink… sigh.

What kind of claws does your cats have!?!My friend have had the same scratch pad for her cat for years…

Well, I have 3 so thats a lot of sets of claws. They also LOVE the scratchers so their frequent use of them is what wear them out so quick. Some cats dont use them much. My moms cat has had the same one for years also.

My other hoodie.
Wearing it for years now and it does show its age.
It also became too large in size to be truelly comfortable but still, I loved to wear it.

My guitars and amps. I don’t know how, but my vintage '65 Coronado II has become unplayable- the electronics have failed and now a bunch of frets are buzzing. My amp has always had a buzz/hum for about 30 seconds when you start it up (I think it’s the fan getting started) but it seems to last longer and the sound has become brighter and kind of gross. Which leads me to the next thing that I wish didn’t wear out:

me,i’m in my 50s and getting up is starting to hurt.also the xbox controller thing.