Maybe I’m just playing him wrong, but every match I do with Toby, I just feel he under performs, with both travel time on his primary attack as well as a charge up on it.

Even his Ult really seems weak, and making it very hard to do the lore challenge for him, I’m lucky to get 1 kill with the ult let alone a double.

As I said, I could just be playing him wrong, but to me he feels like he needs a buff in damage.

Less travel time through your shield…
You don’t have to overcharge it every time…
Try not to ult if you’re going for the dubs until two people are low… if you’re trying to burn someone down you won’t get it, and don’t try to just hide all the way in the back like Marquis, he’s crap from there.

he’s a ranged DPS, think extra damage on someone your teammates are fighting. Don’t waste time trying to solo anyone, pinging them when you can, sure, but don’t expect to kill them.
He can be real hard to gank for melee characters too. 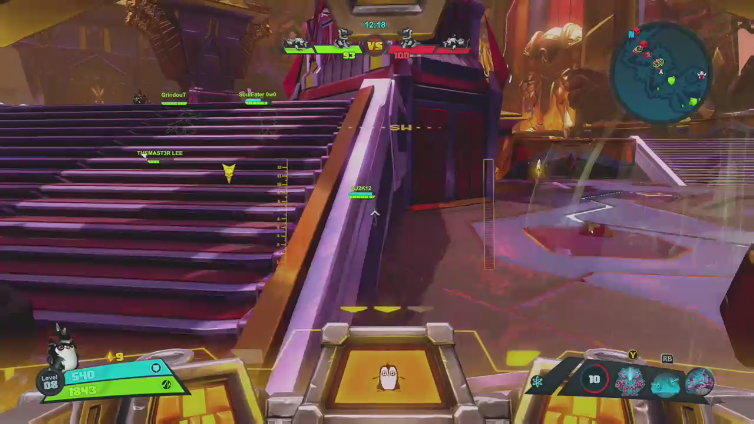 Maybe I’m just playing him wrong, but every match I do with Toby, I just feel he under performs, with both travel time on his primary attack as well as a charge up on it.

Even his Ult really seems weak, and making it very hard to do the lore challenge for him, I’m lucky to get 1 kill with the ult let alone a double.

I completely agree. It seems like I get more dps using his primary than his ult. It can be useful to confirm a kill if you’re having trouble timing shots on a low enemy getting away, but most of the time it’s useless. I think the ult should change to a zone control or team-oriented ability. Maybe something shield-based like an instant m3 overshield given to you and teammates around idk.

Thanks for the responses, I’ll try to learn him a bit more.

Got to say though, I do love this game, most of the characters in it feel rather balanced from the ones I’ve messed around with, figured I was just playing him wrong

Honesly I unlocked him yesterday and he’s amazing.

The ONLY problem of this character is how he’s dependent of his shield and can’t move too much because of that.
I’m pretty sure he’s godlike on incursion

I wouldn’t say God-like, but irritating if he amps the shield health. I was playing Whiskey and ended up spending a lot of time taking his shield out so he couldn’t hang. I killed him once by lobbing a sticky over the shield. lol

I think Toby is pretty perfect where he is. His shield begins cooling down as soon as it’s placed, meaning a significant amount of the time you’ll have a new one ready as soon as the old one is destroyed. He does significant damage with his primary, and his mine has a lot of utility. His jetpack can get him away from most melee characters with ease. Add a shield into the mix, and you can often safely escape from most ranged characters.

Toby is a defender first and foremost obviously, and he excels at locking down lanes without much assistance. Most of the time, a Toby on the front line is a bad Toby. His only major drawbacks are his garbage ult, susceptibility to Marquis, and overly large projectile size.

toby seems balanced for his role to me

As stated by others, I find Toby to not be weak at all.

His basic attack is arguably one of the strongest basic attacks in the game after acquiring the Me 'N My Magnets which is a straight 25% boost of power on his shots when they pass through his barrier projection.

His Arc Mines are also very powerful utility tools when properly upgraded. I personally take Sorry I Broke Your Legs, Plasma Mine, and What’s Mine is Yours. This causes them in order of the stated upgrades to Slow enemies damage by them, deal 50% more damage to shields, and increases the range of their Electric field. With those upgrades, you slow enemies to a crawl and practically dismantle their shields instantly when they get caught in the field of electricity emitted by the mine. Its no wonder why they deter people so well.

His barrier is also amazing for not only upping the damage on his Railgun, when taking Me 'N My Magnets, but for also being a protective wall which allows Toby to snipe and harass people with out being retaliated on unless they break his forcefield.

The only thing bad on Toby is his ultimate which honestly feels like the worst ultimate in the game. As things stand right now, I find his railgun to provide more power and dps than his ultimate does. Which is really funny considering his ultimate has a lengthy cooldown while his Railgun does not.

But if Toby’s ultimate was to get buffed, then he would probably need to be nerfed on either his Railgun or Arc Mines.

The only thing I find weak on toby is his ultimate.
It’s SLOW to use. The damage are okay but by the time you end the casting you die or get stunned/silenced/knocked up. (which all remove your ult because logic)

In one match I was purposefully running through his ult to hit his team mates. lol Yeah it’s pretty useless in my mind except to finish a kill possibly since the rail gun is a little slow.