I might have mentioned somewhere else on these forums the notion of expanding my toolset of things to go with HODOREST.

EDIT: Derp, red and blue are backwards on the “Declination” angles

quite nice. I assume the preview is shown over a static image, might there be an option to load new preview images so a modder can compare the arcs directly to their own geometry?

I was thinking of that as a possibility already

Edit: Oh here’s an easy idea. If I detect a Top.jpg and Side.jpg in the same folder as the .wepn then I’ll use those automatically, otherwise you can you our own universal preset. This way you can set up a series of images for specific guns. Like the Taiidan HC that has 3 different profiles: 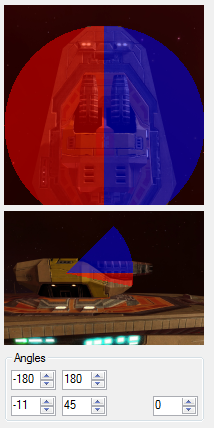 Another suggestion would be to put a square of the arc colors next to the controls that modify them, and if possible make those colors configurable. Colorblind folks and such.

I thought of that as a method of just showing a legend but allowing to change that too for that reason is awesome too.

Could even change them for the hell of it, make them all pink if you want. 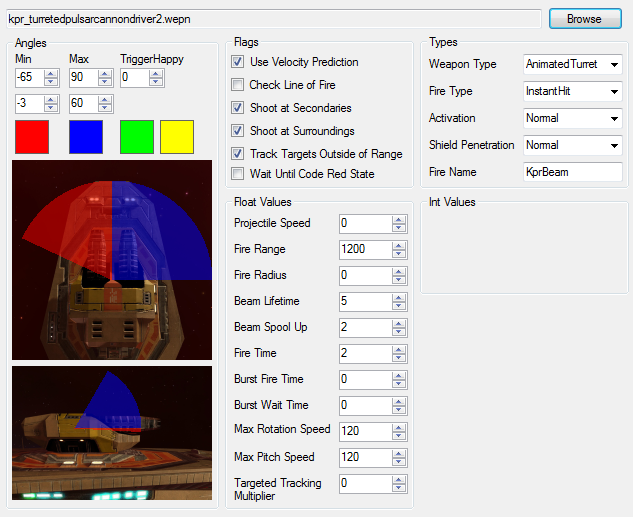 (Just making sure everyone here sees it

Atm the GUI can populate all those stats (I still have a few integer based ones to add) but changing them doesnt change the base stats in the data structure under the hood. So with that of course there’s no way to save a change, but mapping the update function to load all of those UI elements was one big step out of the way

Edit: Welp realized the first problem, none of those numeric boxes are using decimal places, that weapon in the screenshot should have a Targeted Tracking Multiplier of 0.1 but it rounded down to 0, oops. As of this edit I gave them all 2 decimal places

Still on the list of stats to add are:

The cool thing is that when I got to output all of this the function I used to print the string at the very first screenshot can be modified to not post the variable name, and instead just append commas. And maybe for a personal touch add watermark thingy

This is nice work! There can never be too many visual editors

Something like this would help greatly when figuring out the arcs for phasers on the ships in the Continuum mod with the phaser strips!

That reminds me, I’ve restructured our weapon files to be somewhat easier to read by a human, and if I were doing what you are doing I’d have the saved out files follow the same format. I’ll post an example.

( I was gonna have to do that anyway for the penetration and accuracy table since they never seem to be consistent about that. )

When faced with similar problems I ended up outright executing the files as lua code rather than trying to reinvent the wheel with a custom parser, much more durable if someone’s done some clever things in the file you’re loading. Let me know if you want to compare notes in more detail.

What I’ll do is just read it as one long string and separate them by their parenthesis and then parse w/e is in the middle.

Right now it’s pretty simple, read line; “does it contain “StartWeaponConfig”?”; if so, save it; string.split(new char[] {’,’})

From there I remove the quotes with a simple for loop and a check with string.Contains("""). The last parts was figuring out how to handle expressions like when the devs put in a “1400*1.1”. For that I found I can use a data table’s Compute function to evaluate it for me, and then I just store that result.

I just crashed it trying to load Sajuuk’s super laser. The numeric fields have a Min and Max property and if you try to force a number into it that’s outside that range it flips a ■■■■. Turns out 100k was not enough because Sajuuk’s puncture threshold is 1 mill xD 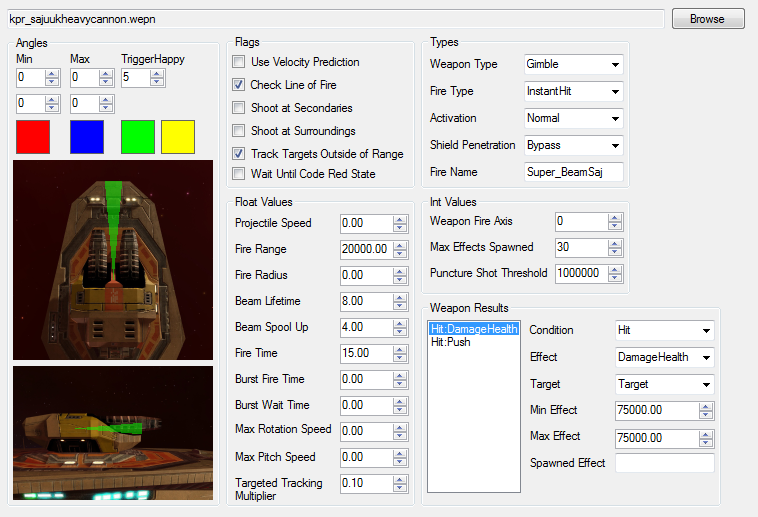 Ya know, I never quite realized, there’s a ■■■■-load of info that’s crammed into these files, like…jeebus

And as it so happened the Sajuuk weapon was perfect for me to test with because it DID have more than one weapon result. Quite simply here the stuff to the right will change to match the selected result on the left. Also I assume that this means a negative number for push makes something move backwards… makes sense. Also makes me realize that the idea of a tractor beam with a positive number could be made pretty easily…huh.

The sad thing is that when I try to make my super project GUI I might end up scrapping 90% of this in favor of the visual-studio-style property grid, but hey, at least this is giving me a great idea and framework for what will need to be done. I’ll probably be able to categorize them similarly too.

I went for it and converted everything to a property grid, was able to reuse all my parsers and just copy and pasted a whole lot of stuff into one super class that uses properties instead of public variables. The Visual Studio refractor made this REALLY easy. The WeaponResults even pop out into their own property dialog as you’d expect. 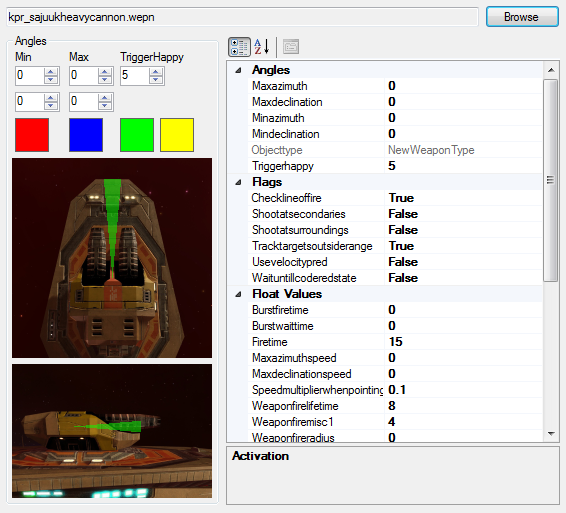 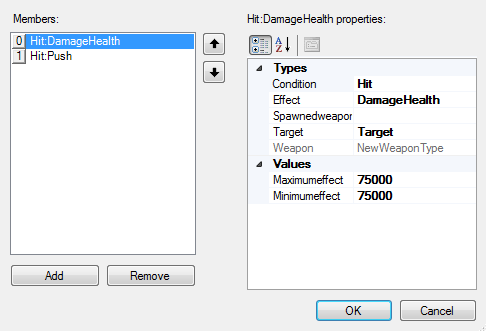 Everything is starting to look right prim and proper now. 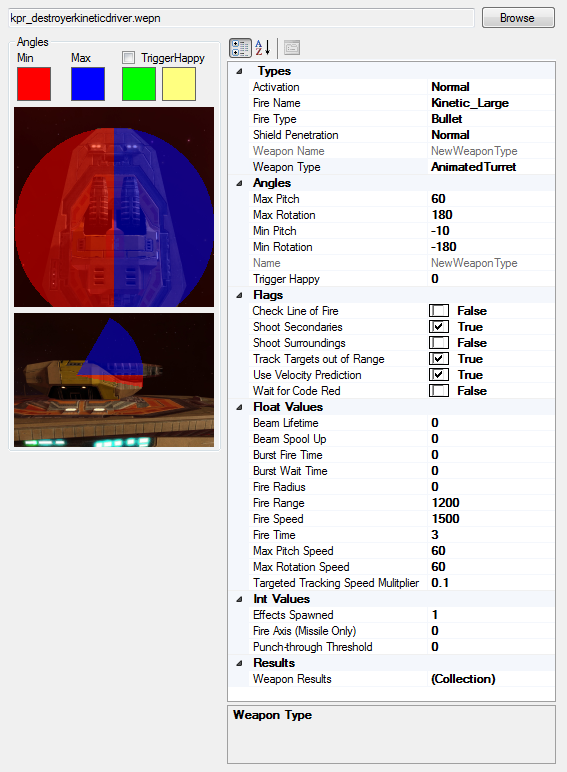 So yeah that was a lot of fun back end work

I still need to make the Turrets and CapShip Engines in Blender tutorial. This is the kick in the pants I need to get that done this weekend.

PERFECT, I started building this after getting frustrated with trying to do it by hand and the lack of multi-jointed examples from GBX. I need something like the Hiigaran destroyer or something D:

So yeah you played right into my hands muhahha 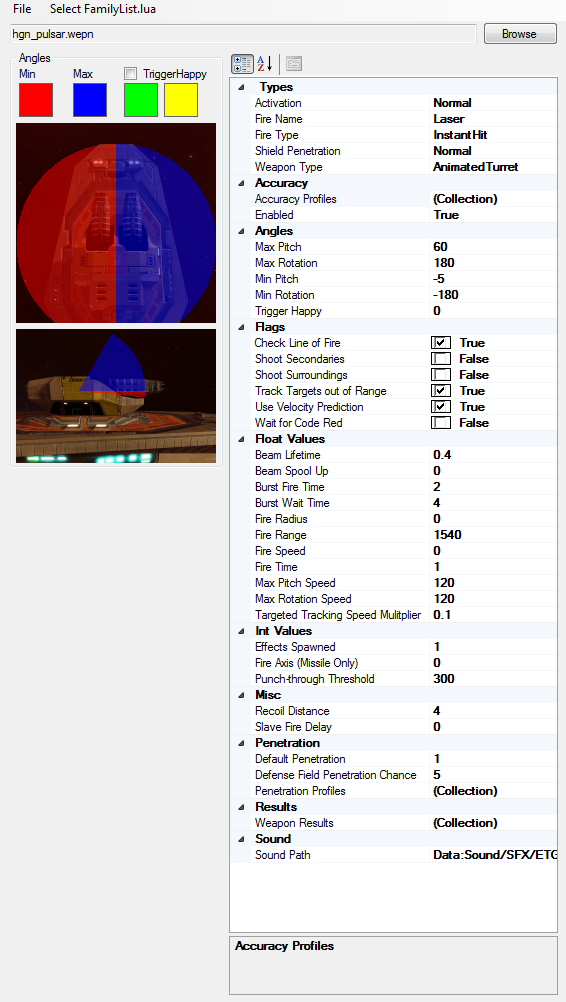 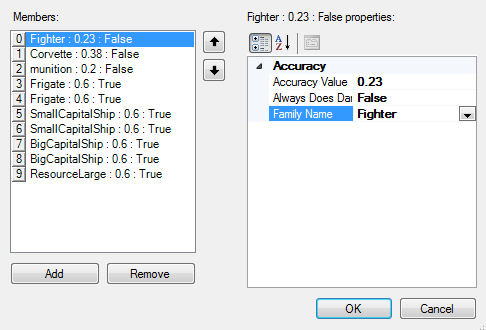 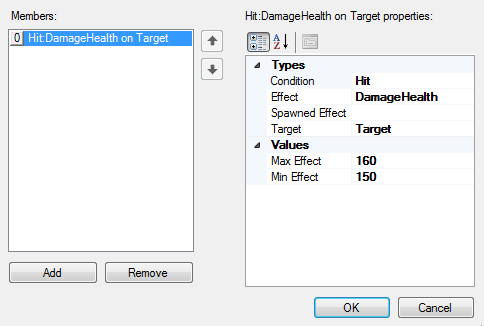 Note at the top of the window I now have “Select FamilyList.Lua”… That’s right, you can pick your own FamilyList to be used in the lists of selected items for attack familes and armour families for the accuracy and penetration definitions

All the parsers have basic multiline support now to and will properly ignore lua comments. And all of the components of a weapon define are being parsed and read into my data structures.

I even gave the exe commandline support so you can set it as a default aplication for opening .wepn files so now it’ll be a single double click to jump into.

Edit:
WE HAVE OUTPUT

Feel free to spot the differences aside from the comment lines 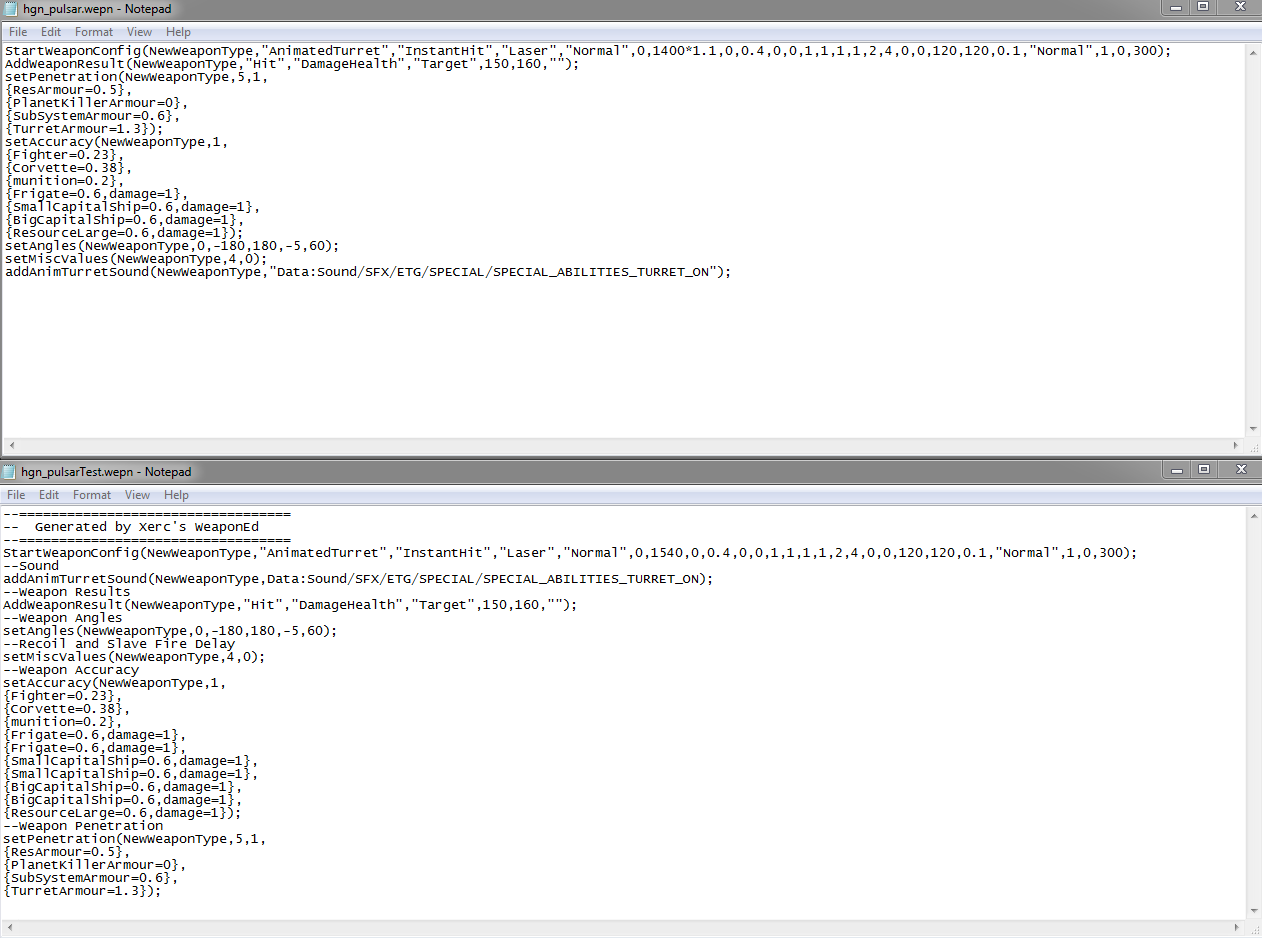 Edit:
Okay found one problem the audio bit didn’t have quotes. Fixed that and now WE HAVE GAME-USABLE FILES \o/

I also added a few blank lines between the fields to kind of give each one a margin, one problem I’m noticing though. For some reason all the accuracy profiles are being duplicated and it’s getting worse every time I open it. If I can fix that we’re solid. I’ll be doing a handful of little clean up things and putting it on github for you all 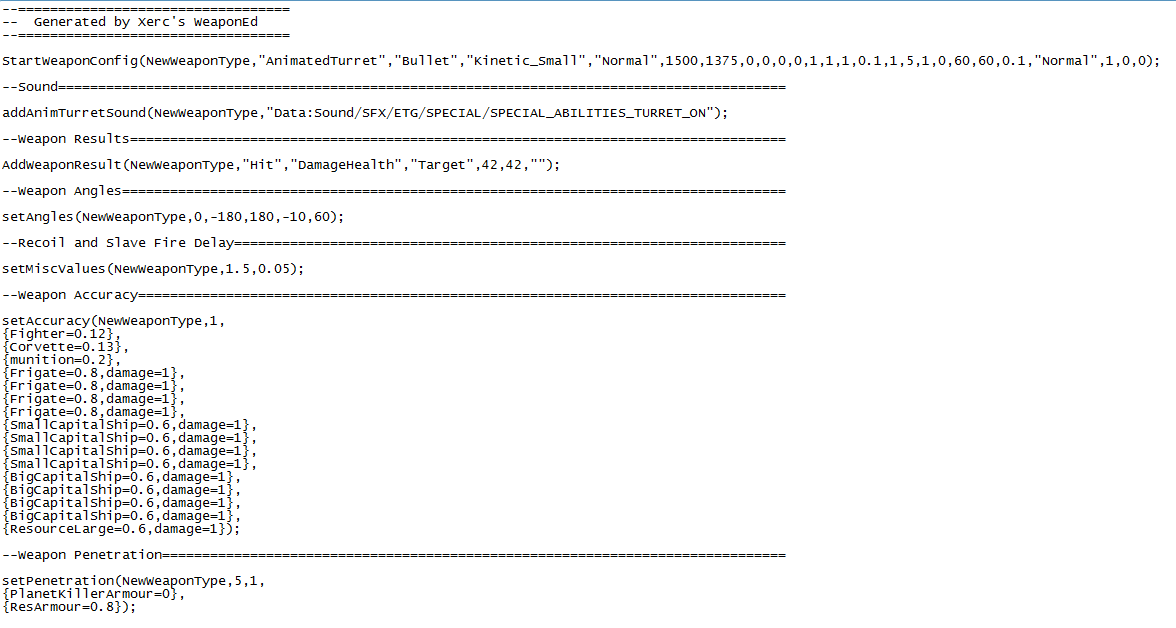 Solved the duplication problem, I forgot to clear a flag when reading the accuracy profiles that included the damage flag which is why the first 3 profiles on that last screenshot were still fine. All I need to do now is wrap it up in a nice little bow, but there could be some quality of life features still to do or whatever else you guys want. I only put a few proper descriptions (some of those things are really long D: ) So there’s that I could do still.

FINAL FINAL EDIT:
(Just to be clear the download link is in the first post of the thread to make it easy to find for future readers xD )

Do we just need to download the exe? Or the config and pdb files too?

Try just the exe. It isn’t an installer or anything so see if it works alone, if not get the other two.

If that STILL doesn’t work then I’ll have to look into doing a installer for ya, prob with a simple “ClikcOnce” publish.

Windows 8 kept blocking it until I clicked the “more info > run anyway” link, but it works for me with just the .exe, and saved a file in your pretty-printed format without issue.

One UI request/suggestion - what about outlining the “browse” section, and putting some text at the left side like “select .wepn file” - it was a bit confusing looking at the right hand side to open a file, instead of seeing anything in the upper left like most programs.

It’s a minor quibble, though, and mostly just thinking of other newbie users. Great program!!

What I think I’ll do is have an “Open” option under file like a proper program would, give them standard shortcut keys, and add the filename to the form’s title kinda like Word or Notepad would do.

Edit:
Okay made a new release for you:

Made a version 1.2 that does version checking, lets you set it a default .wepn program easily, and a few quality of life things revolving around the FamilyList.lua.

Made a version 1.3 that lets you select a WeaponFire folder that scans it for .wf scripts and uses them to populate the drop down for “Fire Name”. This new folder is also saved between sessions and is displayed bottom right in the status bar.

Also tried to make that whole “set self as default .wepn editor” more robust. The Windows registry is a finicky thing

. I also made it so that the editor does a check for admin privileges and will grey out the button if you don’t have any since we need them to edit registry stuff. If it does grey out I also put in a (Need Admin Rights) text on the button so you know what the problem is

Good thing is, if you have version 1.2 it will have told you about this version already