Top Gear for Maya the Siren

I can reconfirm Chuck’s findings with extensive testing with the T4s-R.

I’ll play with it this weekend

Just curious: Do you think the Seraphim is actually better than either Miniguns or Gatling ? Or is this kind of a relic from the old list ?

Not trying to be a smartass, genuine question

I really liked the Seraphim. Very easy to land a couple precision bursts on PL target and move on.

Yeah me too, I only mentioned the Seraphim because it seemed like the weakest entry in the list and the Gatling is a GREAT gun (and so is the Minigun)

I would like the Seraphim more if it had a faster rate-of-fire for the burst and shorter delay.

One thing though, it is fairly light on ammo.

Alot of people go blade by default because they might do a melee character but its pretty much pointless on maya.

The rest of this forum doesn’t have to remain at your level Gulf.

This is probably the most feature heavy shield in the game and maybe the most balanced as well. It has a high chance of deflecting bullets, deflected bullets can do up to 880% damage, it has damage reduction against bullets, and it launches homing slag balls at any enemy attacking you. On top of all that it has good shield stats across the board, high capacity, good recharge and really quick delay. Its almost like having a better balanced KR and a slag version of Impaler on a very solid shield. It can suffer when there are not many bullets in the area you are fighting in (or the entire dlc it was made in) but unlike other shields like the sham it stands on its down as a good shield. It also goes great with a lot of her skills, Life Tap, Kinetic Reflection, Converge and this makes it really hard for bullets to hit you.

It also synergises extremely good with Cloud Kill now it’s been buffed, as enemies will proc it when shooting you (rebounds) and corrode themselves. I’ve seen lots of minor enemy die because of this.

In BL2, not only do weapons drop randomly, the parts configurations on the weapons are random too. Each weapon type has several possible parts, usually the grip, stock, barrel, and sight (Launchers have an exhaust instead of a stock I think). The different parts give bonuses and have drawbacks, though some are neutral. Dahl stocks help control recoil so they are often sought after on many weapons where that would help. The matching grip (Torgue gun with a Torgue grip) will usually give small bonuses to the weapon.

It’s yet another layer of complexity to the game and one that took me awhile to learn. However, at lower levels, don’t worry about parts, it will really only start mattering towards the end of UVHM.

Here’s an image that breaks much of this down. 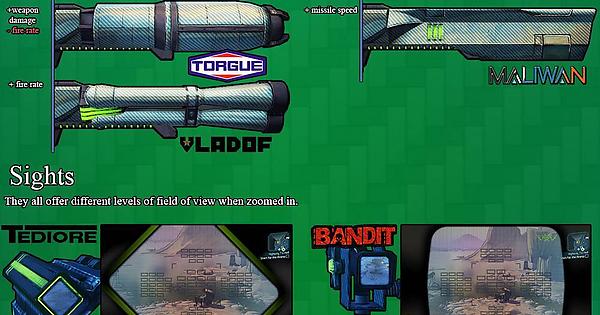 Regarding shield parts , here’s a guide to the different parts’ effects:

Hello, my name is Hoyle4, and I've spent the last couple of days looking at Adaptive Shields. I feel the data I have collected is good enough to share, especially when considering the general lack of solid understanding when it comes to the effects of shield parts. So without further ado... Before we get started on parts, I want to briefly talk about stats, and what they do for Shields: Capacity : How much Damage the Shield can withstand before depleting. Recharge Rate: How much Capacity …

And here’s a guide to spot the parts ( scroll all the way down past BL1 parts ) :

And here’s a primer on all the guns etc.: