Has someone else been experiencing this too?

No. You were taking more damage than you were stealing. Net effect being that your health still goes down, just slower. Unless the patch has mangled something, the lifesteal definitely works.

I played some rath yesterday actually in the Dojo and never experienced anything like this. as far as I could tell his life steal on base melee works. I think the level 5 mutation is still the best too lol

All three choices are equally viable and it just depends on how you like to play him, which one will be more effective.

All three choices are equally viable and just depend on how you like to play him.

No. You were taking more damage than you were stealing

That’s the answer to your concern OP. Lifesteal works as intended with Rath. I also prefer the lifesteal on melee as opposed to the other 2 choices.

Has anyone tried to stack lifesteal with gear such as this one? 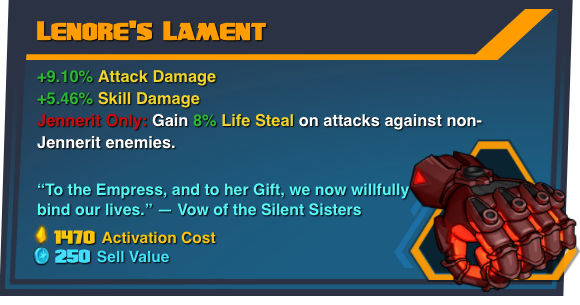 I didn’t misread it. I know that you were expressing your opinion as to which one you prefer.

Has anyone tried to stack lifesteal with gear such as this one?

I’ve tried it and didn’t care for it too much. Mainly I don’t like wasting that many shards for legendary gear when I could use them to benefit the team with turrets or minions instead. Interesting thing about it though, it lets you get 8% life steal against big shards and shields. Not sure if that was intended or not and I haven’t tested it since the update.

Were u wounded tho?

I don’t think I was wounded… it would be new to me, but it would be a Visible Debuff like and such, with the screen giving me a hint of “You are wounded”… right?

Also, I was looking very close at my health, while I did see my basic 21 health per second do their thing, the life steal didn’t seem to Kick in… even though I had a Melee Crit so the health should have a Visible Jump there (ca. 100 HP should be at least be a little Visible)

Maybe it was a Random Glitch, I don’t know, for the other enemies and the rest of the Level it worked very well, so I thought it might be connected to this Type of enemy…

Be aware that it doesn’t proc if you are hitting shields. Only damage to health counts.

Also it is basically indiscernable in combat because you are taking damage from other sources. Try wailing on something which isn’t hitting back without having regen gear activated and you will see how small the lifesteal is.

Yes, no shields… the Fella I wailed on had no protection on, otherwise I wouldn’t have a crit with +300 dmg… which would mean around 100 hp of Life Steal.

If you don’t play the ever so chomping Kelvin a boost of 100 HP should be visible if you Focus on the health bar.

I don’t think it matters too much, since it did work the rest of the OP.

If no one else experienced that it was probably just a Random Glitch.

The wound debuff is actually not visible at all, at least as far as I’m aware.

But you mentioned “OP”, so this was a DLC mission? For some reason I assumed Twin Bots - Twin Thralls :'D I don’t think there’s any wound in the PvE missions, so that wasn’t the reason.
Life steal is also usually visible but I guess in PvE you could be taking enough damage for it not to be. Or it could be a weird glitch, very hard to say since there is no video and it only happened once.

As others mentioned, you were just getting out chunked mate.

Big Daddy Ronin’s hit like a truck, and even with his 30% on melee, Rath’s low dps doesn’t guarantee an eternal top off from the life steal fountain.

Wound is actually visible, it’s just tucked away in your health bar. There is a little emblem looking thing directly right of the number that shows your current hp regen. If you are wounded it kinda blinks. I think it blinks red.

Well that seems like a horribly obvious visual queue.

Yes i tried, used that and his legendary, is not worth it…

You can see a small dif with beatrix life steal too, other way a regen + regen gear will give you more survavility than life steal stacking.

I tried it with rath and attikus, is usless! Minions hit hard and players wont miss a chance to cc you.

Don’t tell me that.

I’ve wasted countless hours trying to get it for Rath!

Just for it to be pointless lol.

you are probably a better rath than me

I usually heal myself with minions wave using skills, its easier, faster and its safe.

I got mine from a commander lootpack

I’ll still give it a shot if I ever get that gear. I end up healing pretty good with melee attacks against minions so I know with an increase in life steal stat it can be better. The attack and skill boost is a major plus.