The plan is to use only gear that I’ve never used with her before and using skills that I’ve never really bothered with ( Backdraft, Life Tap, Blight Phoenix & Kinetic Reflection @ 5/5 , etc ).

I think you’re in for a treat. Are you using the UCP? I liked them before, but the UCP changes them from Life-Tap feeders to low-level killers.

In the spirit of this, I’m going to re-spec Aurelia to get A Backhand to Remember just to see what that’s like. I think I can get down that tree without “wasting” any points in the master/servant-based skills (which I can’t use solo). I love knockback in these games.

edit - besides the three points I need to get into that tree.

Quick question for my fellow Borderlandsaholics. I’m just about to get a level 50 Deputy’s Badge for when Samael gets to 50, are the stats variable or fixed, and if variable, what are the maximum stats at level 50?

Edit: I checked the wiki, and I know it isn’t always right but it suggests that this is perfect for level 50

That’s another person who got a Kerblaster from Handsome Sorcerer. That and the Tubby Bones - Infinity phenomena. It’s like they reach into the world drop pool and keep drawing the same card over and over.

The wiki is correct. If you need any other max stats, the links to all the google docs spreadsheets are in this post:

Are you using the UCP?

Nope - I’m one of the UCP party shitters ( not that I have an issue with people using it, especially folks like you who know how to balance combat )

Backdraft is fun… it’ll restore most (all?) of your health if you hit an enemy with it with Life Tap up. It’ll probably be more of a novelty if you’re using a roid shield though

Yep - I was vaguely thinking of treating this like a melee Zer0 would : actually stripping the shield, preferably one with a shorter delay & smaller capacity so it can be ready to go again. Inertia would be the ticket but I’m not willing to spare the points atm. If I’m going melee, I want a roid shield if for the simple fact that I like the sound ( and dislike the absence of sound ). I’m not likely going to do Backdraft spamming, but I’ll be trying out nova shields at some point.

Recompense makes more sense as a melee skill, it suffers severely in UVHM

I’m starting to wonder since I spec’d it. I’ll play around with it more. Since I’ve never used it before, it’s worth giving it a fair shake.

My co-op-ing is pretty limited these days, and I still don’t see the point beyond the very few escort quests. It’ll stay barren for now.

if you haven’t tried Thoughtlock with full Sub Sequence, I would highly recommend it.

Before bew’s current challenge ( most SS chains ), I always treated them as mutually exclusive. Now at the very least it’s 4 extra seconds for 1 point - and seems silly not to combine them.

I’ve been off Pandora too long but I made a quick return to drunkenly play Krieg a couple of weeks ago. A couple of days ago I started a new character

SiiiiickBurn has entered the game. Gaige with a focus on LBT tree but also playing with Anarchy. I never did ‘get’ Gaige (I play more of a brawler style, Krieg is king!) and I don’t do well with ‘pet’ classes due to forgetfulness.

Already comfortably maxing out my anarchy (150 cap for now) and doing OK but obviously accuracy is a problem. I totally discovered that when I had to shoot some Bonerfart projectiles out of the air! Got myself as far as Sanctuary and rescuing Lilith and playing with a mix of shotguns and SMG’s for now.

Still forgetting to throw DT out on the field until I get swarmed by Rakks and can’t easily defend myself!

Only level 11 so far but I’ll keep grinding around some stupid Christmas hours at work!

Already comfortably maxing out my anarchy (150 cap for now) and doing OK but obviously accuracy is a problem.

Did you put any points in Close Enough? Most anarchy-centric builds do that, at least.

Yeah - the first 6 points have gone into the important skills!

Hitting enemies is fine but shooting rocks that get thrown at you? Yeeeesh! 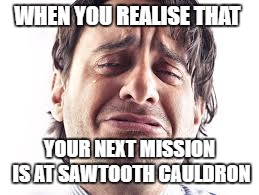 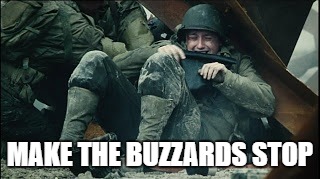 heh - just did some co op in Sawtooth Cauldron - here’s some video.

Since I’ve never used it before, it’s worth giving it a fair shake.

Dragged Axton through uvhm bloodshot. Dinged 52 at some point. Some of it is I’m used to rarely going down with my fully geared characters, but it just seems like I’m spending too much time in ffyl, backpedaling and running for cover. Really only able to kill stuff with my turrets out due to the aggro relief since it takes so long to get kills. Basically have to slag them one at a time or the second will lose slag before I get it killed.

Then joined some friends and took down the dragons, Terry and tried spawning Vermi with no luck. A tubby varkid dropped a much better L Nurse com than I had, went from 9k to 11k regen a second. Only uses the com on a healthgate abuse build so that extra regen may not matter, but better gear is better gear

It’s been a big day for Hattie’s Scorn. She just finished Wildlife Preservation, so about to hit 1000 Cuts.

I’ve kept the same build as I last posted and have done an admirable job of dying extremely infrequently. I don’t seem to have a particular approach other than the Law stays in the first slot, roid shield on full-time and I’m using only never- or rarely-used guns.

At the moment she’s sporting

None of that is particularly strange I know but w/e.
I’m starting to wonder if I should bump her up to OP1 or OP2 - her DoT’s are pretty damn powerful but I’m not prepared to take Cloud Kill away. Anyways, loads of fun. Nice to be able to do something completely different with a character.

Samael triumphed over Sawtooth. Now i’m being smart, because of the Slag Licked challenge bug, i’m going to get Challenge Accepted trophy on him before he goes into UVHM, since i’ve not slagged anything really in TVHM, it won’t bug out until it reaches level 5 for the first time. So i’m on the hunt for a maylay shield now, and then various grenades. After that I need to visit Southpaw and shotgun loads of enemies at point blank range… Fun!

What’s the prefix on it? For Darts, I almost always prefer the double-shot one, since accuracy loss doesn’t matter with them, and I’m trying to get as many rounds downwind as possible. With Maya, when/if you take Cloud Kill, they make convenient delivery systems. If you find a slag one, you’ve got a cheap remote Loader (well, probably anything) killer.

You’re rocking Thoughtlock with Sub Sequence, no (and I’m sure you have Converge)? When you get that party started, just fire that gun at the feet of the enemy at the center of the mob. He’ll take some (weak) direct damage, but everyone will take the subsequent splash and detonation damage from the ground shot, and it’ll destroy. With the constant detonations, Ruin/Converge will constantly fire, drawing the crowd onto those detonations repeatedly.

I’ve also gotten adept at seeing when Scorn is ready and quickly jerking it to the side if I’m about to melee a target.

Heck yeah. I’m also a fan of the Might of the Seraphs with her, but I’ll generally be using a Binder COM for at least some cooldown buff.

I took my Bandit Mechromancer through round 3 of the Magic Slaughter with a Slagga, Teeth of Terramorphous, Chopper (corrosive) and Badaboom (fire). The Teeth were for anything fleshy (which basically amounted to just a few Spectral Skeleton Archers), Chopper for most everything else, and the Badaboom for emergencies and ganking the Skeleton Mages. There were two ammo relics there, so I could really lean on the Chopper without sweating ammo (though I definitely tag teamed those relics throughout the entire match). Heck, I even laid into two Ultimate Badass Skeletons coming at me with their shields up just because I wanted to see the bullet show and see if Close Enough could sneak some shots in the tiny gap between them.

I am using the UCP (and BAR is on at 20% across the board), so the Chopper has 10% more damage and it consumes even ammo (four rounds per four shots instead of six rounds per four shots). I am disabling the the 10% damage buff… Gaige is the only character I use with this gun, and she’ll just have to pile on a little more Anarchy (6 stacks?).

To my relief, I managed to get it.

Glad because I thought the glitch would prevent it.

In the first of a new series I will call “Farming Stuff I Won’t Need for Ages”, I got this for my Mechromancer (who is still only level 9…)