Yes it is. Is it problematic ?

No, but you might want to include that information in your posts. Otherwise, I foresee some frustrated “How come Bad Maw has stopped dropping the Deliverance” posts down the road…

Oh, both of you are right. I already mentioned it but it was waaaaay before so the information pretty much disappeared.

Related (not really), i’m gearing my Kriegman up for the peak. I have no idea what he needs, furthest I ever got on Xbox with him was maybe OP4. So, on PS4 I want to go one further, not sure what to do though. Got two Kittens (Corrosive/Shock), just got a new RR. Slagga, already have a Harold. What else?

Ah, yes he has one of those already because I use it in general play sometimes. Also a Flakker.

Sheriff’s Badge, probably a must-have for him in the peak.
Not only it increases your Harold’s DPS but it also increases your axe throwing rate, meaning you can spam those large bosses like Dukino’s Mom and Saturn.

Also if you want a bit more sustainabiliy you can get a Blood of the Ancients with a boost to Pistol and SMG ammunition. Since you’re using the Harold you’ll maybe experience ammo issues with just 900 bullets in your Pistol ammo pool. I don’t like it because I prefer having more Damage but it’s a good option.

An item I always bring on my DP runs is a Corrosive/Shock Conference Call to deal with Surveyors, because DAYUM these things are annoying !

to deal with Surveyors

You know what I say about Surveyors?

(But yeah, you’re right. I’ll try and get a CC from the Sorcerer)

Explosive relic for krieg is usually a good idea

An actual Flakker advertisement by Torgue would sound like that :

I think you missed out,

Hell, this one is badass. 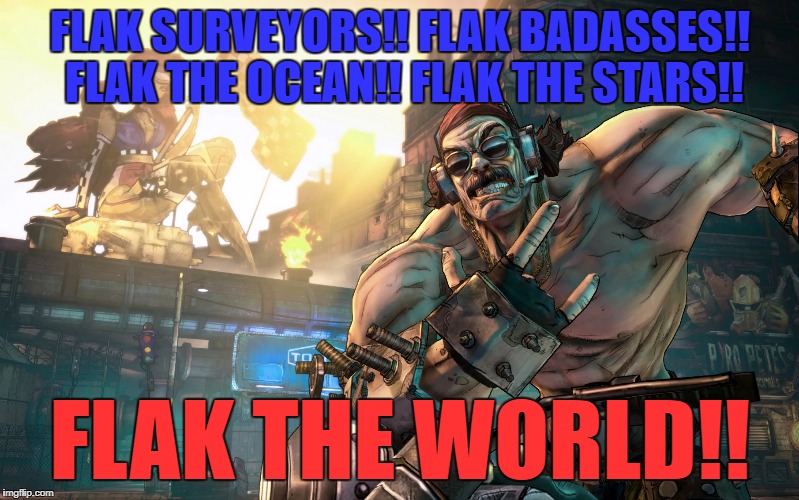 I can’t stop making them now though 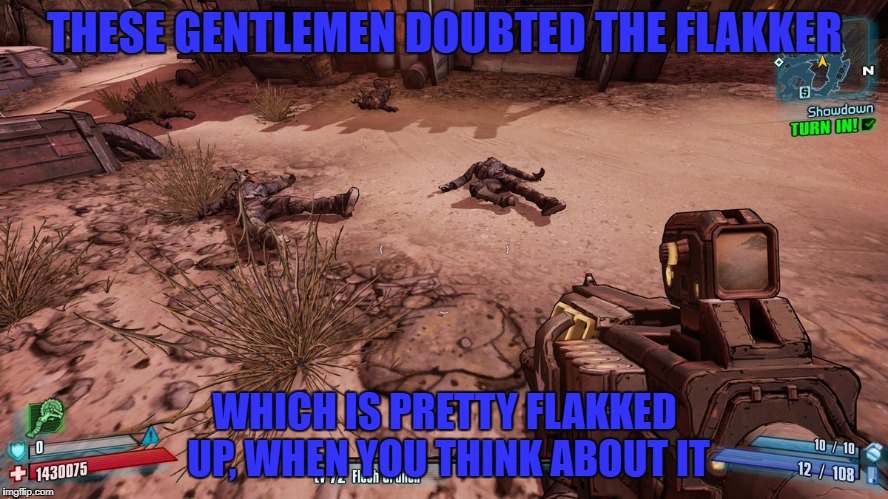 New meme of the month ?

Out of interest, where do you all hunt for tubbies?

HH, the vehicular half of the Dust (sometimes climbing up to see Mobley & Gettle and do the back half too), occasionally I’ll make a run through the Arid Nexus maps and/or Three Horns Valley.

From what I understand HH is the best spot in the game because there are several elemental spiderant spawns, which count as “badass” and are therefore more likely to be tubbies because a tubby replaces a BA spawn. If I remember the explanation of game mechanics correctly - I’m sure it was one of the other regulars here who first explained it to me, so correct me if I’m wrong, folks.

Avenger (is this good?)

Yeah, I found the one I could use to be effective. The gimmick wasn’t super-helpful, but I’m not much of a Tediore chucker to begin with. But it had quite good damage for an SMG of that level, and the ammo regen is handy even after you’ve outleveled it. As I mentioned a few days ago, when Axton ran Candlerakk’s Crag he had several pauses to just stand around and wait for the Magic Missile to regen his grenades while the Avenger regenerated a good amount of SMG ammo. So I’d say the Avenger is not a