Offer still stands, you have 30 minutes to stake your claims in me and my Canadian counterpart or forever hold your peace, Vault Hunters.

One final thing on G4GE-TP… I was wondering, was Cooking up Trouble (now at 4/5 @ Level 9) the right way to start this build off? I was debating this and Close Enough (which, considering I want something of a BFF/OC and DT hybrid for G4GE-TP), and went on the latter eventually.
I’ll save Anarchy for either TVHM or the second half of Normal.

I don’t know if it matters too much super early? But once you start getting points, I don’t think I’ve ever seen people pick up CUT over anything else since BFF gets strapped for points for much better skills. Close Enough won’t be as good without Anarchy, but you can’t really take advantage of CUT while leveling, but you always end up missing bullets or shots or spread on some not-so-great shotguns or certain enemy types and not having Close Enough just seems weird to me.

I levelled my Gaige with that same goal for my build. I started with CuT, but around level 9 I repecced to the point in anarchy and close enough with a focus on rapid fire and high pellet count shotguns. CuT worked fine with larger mag guns before anarchy because you don’t lose stacks for early reloads and I was able to heal up between engagements with a reload and some patience. Once I respecced the heals became less important than maintaining my stack count and I just worked towards SiC, which I had by the end of NVHM. Through TVHM I focused on OC, once I had BSS and Discord she felt nigh invulnerable. I don’t know if that helps you, but it definitely worked for me.

Thanks for the insight.
I think I know now where I want this build to go.

Cooping with forum friends is always awesome to see

I thought I felt a ripple in the force.

Thank you my friend and cheers to you

Well, I guess it’s time for another update, my friend and I did a few Bunker runs yesterday to try and get my Maya a fresh SMG and lo and behold we got… well nothing. Oh well!

Whoa whoa whoa … so you didn’t get your 2 or 3 pearls and a legendary??? … that’s it, if i go up there next time and don’t get at least that i’m blaming you for breaking him ok

I had to jump on the melee zero hype train and used my few freetime to practice some mobbing with him, … i hope to join some coop runs with the community members anytime.

[IMG_0210] pic by @nat_zero_six Melee Zer0 was my 1st toon to get thru UVHM and then have received tons of support, from others, to go thru the Peak to get to OP8. I have, over the past 2 years, on and off, tried to get Zer0 thru OP8 solo. Now it is my #1 goal whenever I play BL2 to get him thru the Peak. There have been some major fails but when something goes right, Zer0 is a killing machine! So, anyone out there still playing Melee Zer0? Can you tell me your “Good, Bad and Ugly” expe…

Surly we can hook you up

Okay, yesterday I cleared a place with a bunch of robots in a WR time with Maya the Siren

Congrats dude that was a great run

Jumped online and loaded BL1 and as it was loading I saw @FailyFailracer in BL2 and he msg me that he just did a sub 5 run through Friendship Gulag. Very nice run … I decided to give it a go with a little nudge from Faily lmao oh my, what an eye opener that was. I couldn’t get under 9 min. seriously …

WR time with Maya the Siren, the arena was Friendship Gulag

I forgot that before I joined the above I ran the same with Maya to see how fast I could do it. I got close to bew’s time but didn’t break into the TT Leaderboard. I only tried a few times with a suboptimal build but I honestly have no idea how you managed that time @FailyFailracer.

You pair (@Kurtdawg13 & @Jefe) should try Hyperion with Sal because IIRC (and i do) you helped the current WR holder learn how to build, spec and play Sal which led to him getting that WR

ps: I think a sub 8min run is doable myself.

pps: Playing with a controller and swapping back and forth to m&k’b was hilariously funny at times. Between not remembering what any of the buttons did and then having to use buttons on the k’board i never normally use i was at a complete loss most of the time, but i think i’ll just have to stay with a m&k’b until i get my old one (or it’s replacement) back

72 Axton made it to Nakayama’s ship (love that guy)

Me too … it’s the one part of that fight where i really feel confident, however i will admit to missing my Execute from Decepti0n a few times as he tumbles down that ramp

What? … it can be tricky to line up sometimes

ps: No likes for you lot

… old habits got me

@SomeRandomGuy11 is really back. Love those summary post in part 1 back then.

You pair (@Kurtdawg13 & @Jefe) should try Hyperion with Sal because IIRC (and i do) you helped the current WR holder learn how to build, spec and play Sal which led to him getting that WR

You mean this clown?

I totally forgot that!! Challenge accepted! (after posting runs on all the Ninja boards , beating Faily at the Friendship Gulag and getting a sub-20 Ninja Peak run…)

I don’t have a Transformer, and the prospect of getting a Hail seems worse than killing Jackenstein without one, heh. I do have a Vladof sniper or two, so I may try picking away at him from the cheese spot.

Thanks for the advice. Results will be forthcoming.

Allergies were messing with me today, since weather is terrible here right now. But anyways, decided I would go back on my Maya. I took a break after I got her to 72 and messed around a bit, eventually killing Terra & Pete and farming all three Sandhawks. Man I hate farming Sandhawks on console. 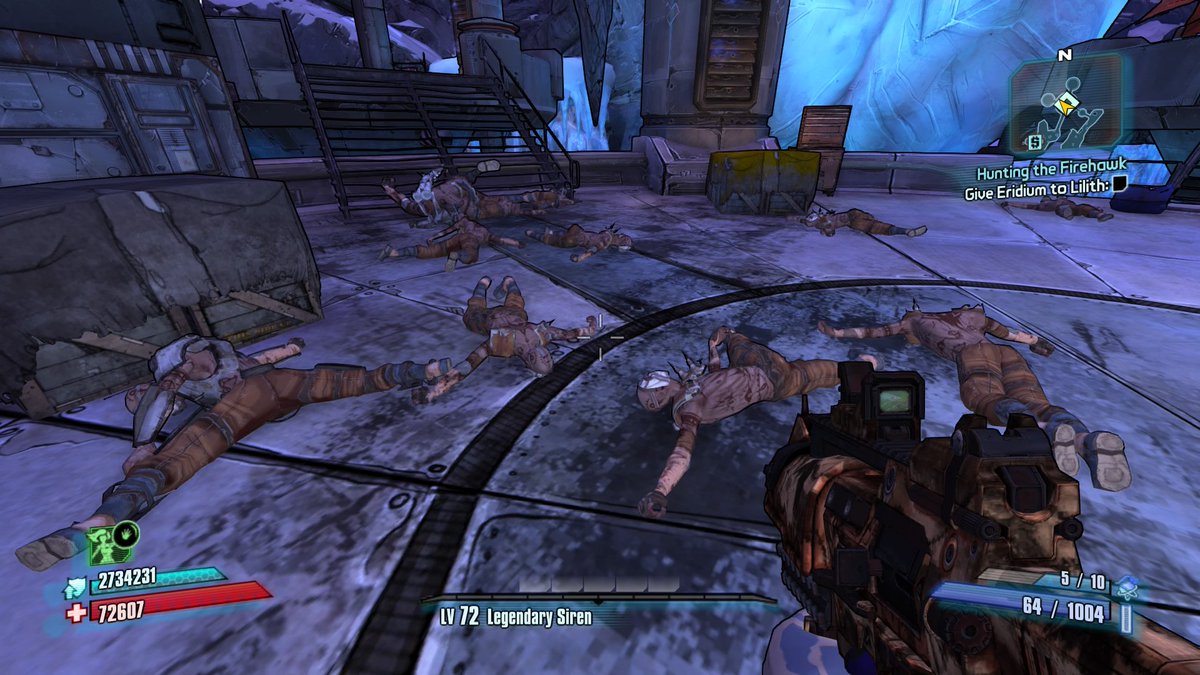 Then I blasted through Bloodshot Stronghold after getting a blue fire Snider with +120% critical hit damage. Had fun sniping things for massive amounts of damage. Bloodshots were pretty glitchy though, which was kind of funny. 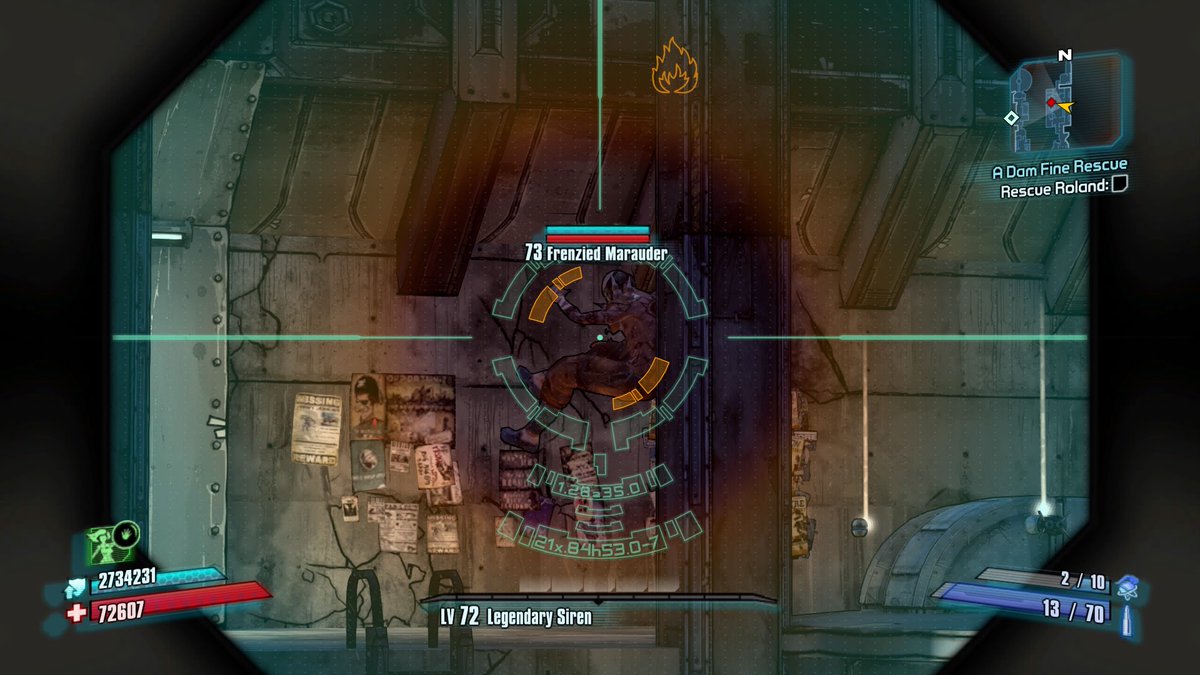 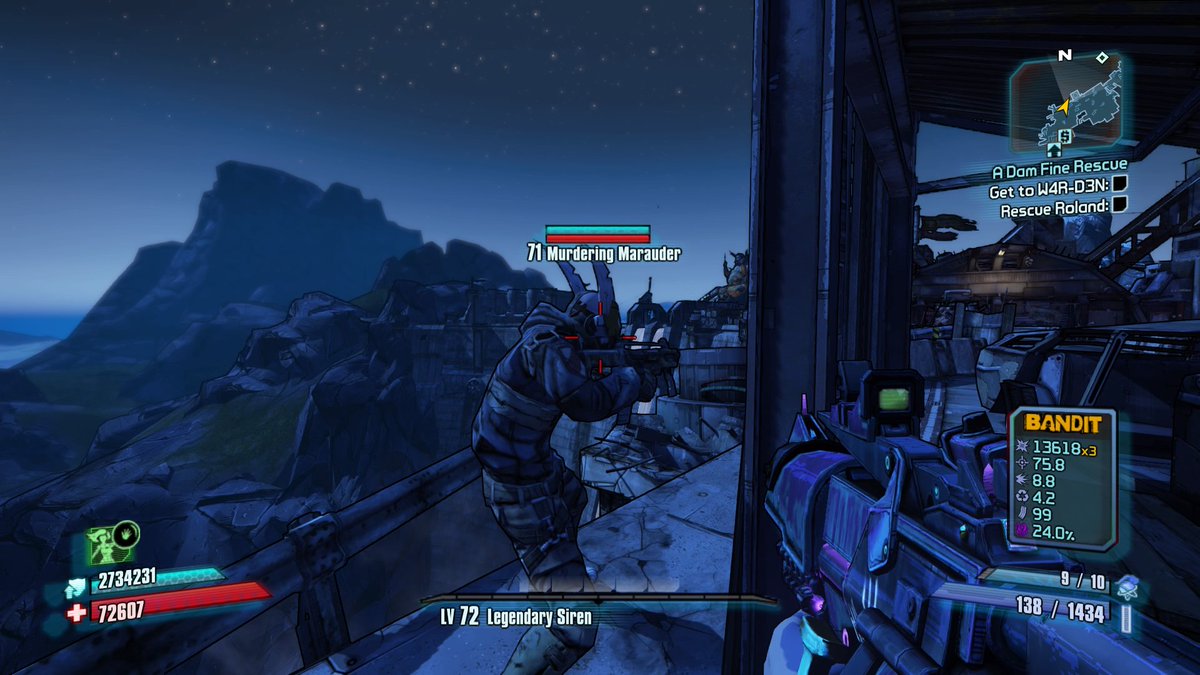 After that, made it to Wildlife Preserve. Forgot to pick up Doctor’s Orders before leaving Sanctuary, had to go back and do that after getting about halfway through the Preserve. Thank god for carrying around Rough Rider & Breakneck Banshee com. Got three LLMs from the boxes + Jimmy. Nothing of note. Heart of the Ancients but with assault rifle damage, which is blegh. But I did get Sledge’s Shotgun with amazing reload speed. 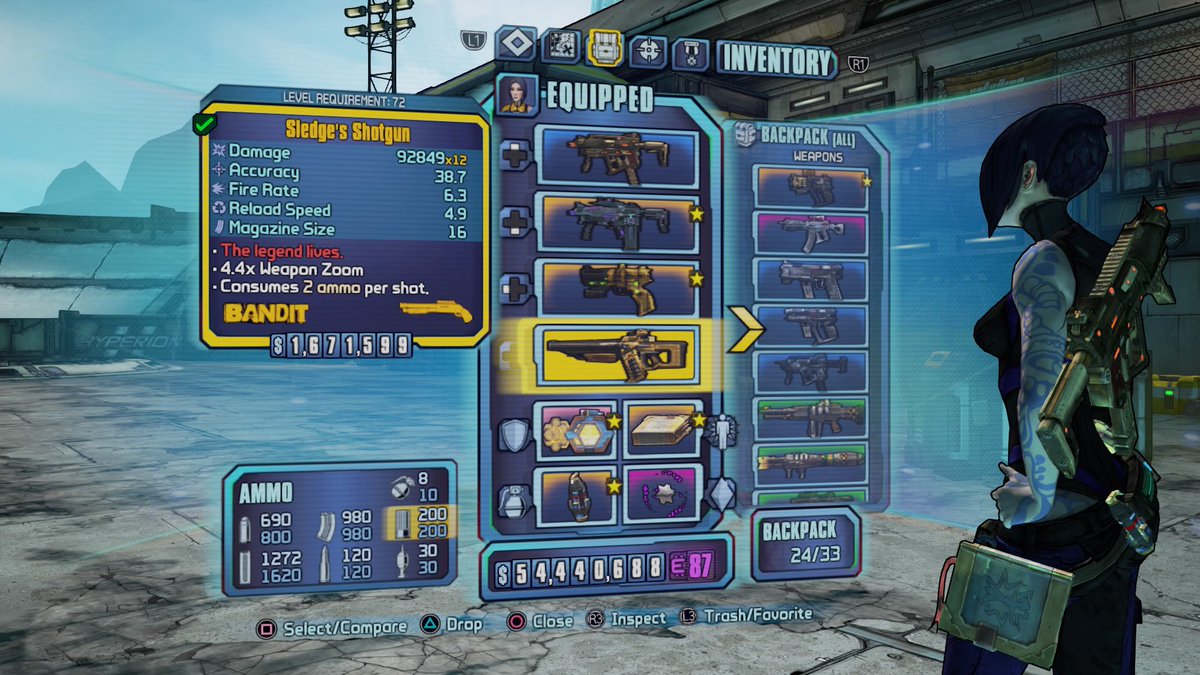 Fun to use, but that reload speed is… something else. According to the variant charts on the wiki, I just got the worst version possible on reload speed.

What a b***h. Not the best time but hitting the crit Spots is a pain on ps4 and its for the kill in general

The whole time i had to be aware of a two leged Drifter in my neck. Why are they so Op? (Atleast with no skillpoints spected).

Next one is vorac. Before i Face the dragons challange wich seemes to be unbeatable at this moment, I will do the rest of the side quests and slaughter rounds. Digi peak is last

Made two miserable attempts at OP8 with Ultimate Krieg!! this morning- the first attempt failed at the very start when a slag spiderant centurion kept getting healed by a trio of surveyors. The second ended when- in an attempt to draw off the four surveyors that accompany them- one of the dual Scorches came along as well (sometimes I get lucky and can get all 4 surveyors to follow me while the Scorches stay near the gate). Needless to say, things did not go well

The good news is that two more of my friends that introduce me to BL2 have started playing again- one is manning Zero, the other Salvador. If they catch up to myself and my other friend it will be Krieg, Sal, Zero and Axton- kind of a boys night out in Pandora

still rockin’ that PS3 i see? Any plans for a upgrade? Potato’s are cheap

I’ll rock that PS3 till that thing just gives up entirely. Seriously though, I’ve got PS3 games I’ve still never played. I will upgrade, maybe PS4, maybe PC, or maybe even both because I’m a tech whore, but I will wait until it’s necessary. Whether that means that my console passes away or my son gets old enough to dominate my television I don’t know.

OT: @kawashiultimate’s Gaige question gave me that old familiar itch, so I fired up Exit,GaigeLeft this morning. A brisk walk through Opportunity to try for a new Black Hole (success on the first try!!!, and on level!!!), and then off to Hallowed Hollow for her first Halloween. A couple of respawns, all operator error, but she deposed the Pumpkin Kingpin and then got some Brain Candy for our undead buddy. Still never seen a tubby there, but it was a pleasant walk through the haunted forest.

I would seriously consider getting a PS4 before the PS3 dies, so you can transfer your BL2 (and TPS) saves over while you still can. You have to have both consoles (and the Handsome Collection on the PS4) to do this.

I have been contemplating that action, but having difficulty convincing myself that it was money I could afford to spend. But I’ll probably get there sooner rather than later.

Jackenstein is dead. Hooray! Also: Gah! I tried the cheese spot at first, but he’d always jump up into a corner of it where I couldn’t hit him. Frustrated, I jumped down, panicked, and died almost immediately.

Eventually I ran around in circles long enough, 20-30 minutes, and my potshots wore him down. At the very end the bastage shock-balled me into in FFYL and jumped right on top of me, but a single lucky Lyuda shot finished him off.

I got a lot more mistakes to make before I’m any good.

I assume that people are already aware of it, but I figure I’d mention it anyways. Vorac should be pretty easy if you do a shock Axton build. Shock Trooper com + shock relic (or shock Bone for a bit extra), Storm Front (Tesla if you don’t have it) and Slagga. Drop turret for Battlefront, throw out Tesla/Storm Fronts, slag him, Vorac should melt really fast between all the grenade damage bonuses and the massive shock damage boosts.