Ok… we’re looking at different playstyles. I’m taking Salvador up to rooftop ledges where he’ll share some lunch with sniper Zer0 and pick enemies off from below. A Money Shot-backed sniper rifle works fairly well… he’s no Assassin, but it works.

This is my current thought, but I keep second guessing myself. Some of the skills work against one another. For example, 5 Shots or 6 and Filled to the Brim are counter-productive to Money Shot. If you’re doing the most damage at the end of the mag, you don’t want a bigger mag. All in the Reflexes is rendered pointless (almost) by Auto-Loader, so long as you get a kill (not guaranteed in multiplayer). But Filled to the Brim and 5 Shots or 6 support Auto-Loader by making it more likely to trigger and thus to (in theory) never need to manually reload.

I am specifically avoiding any buffs to Gunzerking, but in the first session Gunzerking was good for those times when I had bullymongs in my face. Big target, can’t scope, why not hip shoot two guns instead of one? So I’m thinking Keep It Piping Hot might be a good skill, since it means a little extra damage going into the start of the next fight.

I’m just assuming that No Kill Like Overkill will work well with sniping and crits.

I haven’t done any reading on the subject. I just looked at the skills and decided it would be interesting to turn the bullet-spewing maniac into a calculating sniper.

If you’re doing the most damage at the end of the mag, you don’t want a bigger mag.

Depends on the gun? The deeper the magazine (to a certain extent), the more power in Money Shot. If the rifle you have doesn’t have a deep enough magazine to get the max, a few points here should do it. You’d want to consult an actual gunzerker for real stats here, but you get the drift.

Let us know how it goes for you… I steamrolled to OP8 using his gunzerking routines, but I find this more enjoyable.

You’d want to consult an actual gunzerker for real stats here, but you get the drift.

It needs a magazine size of 12 to get the full money shot bonus.

A but more shuffling of gear, and Psycho Naut was off to the Forest. Had to use the cheese spot for the Duke - having only a single fire weapon that’s a maliwan sniper three levels below me does not help terribly much with the Duke at +5.

Got through the Forest, then it was back to Firestone Sanctuary to pick up side quests. Started collecting crumpets and thoroughly torture tested Torgue with tricky tests. Finally hit level 65, which will give me some better options gear wise.

There was this post asking about Hellborn/Mania Krieg here and since this is probably the one build I’ve never done I thought it was about time.

All he gets is a Leg Sickle, Rough Rider, Firestorm & Chain Lightning grenades, health relic and a Slagga.
And this build :

He did a test run before I do a reset with him - this is going to be a snap at OP3 I think.

Oh yeah, in other news I got Ymir to OP2 last night - I just can’t let my characters sit at 72 if they’re gliding through life.

Jakob’s Jr. made the journey through Hero’s Pass. Hit a couple rough spots but eventually got to Jack and the Warrior.
Killed Jacks clones, killed the Warrior, killed Jack. Dinged 66.
Warrior dropped a Skullmasher with crap parts, but hey, it’s a Skullmasher. He also dropped a head I don’t have. I usually don’t care about those things, but it’s rare to get one that I don’t already have.

After the Warrior I went and farmed Slappy for the hell of it. He gave a 0.0 fuse transfusion and a Rustlers Striker.
Then I farmed the Zaffords for a bit. Used the Striker to take out Mick, then used a green rarity Widow Maker for this minions. I’ll probably do nonsense like that until I hit 72.

So…this is stupid with Elemental Empathy and without FtB and Bloodbath.
With EE the constant healing makes RtB impossible.

Initially I gave this build up and went with a conventional Bloodlust/Mania build (with Bloodsplosion) but thought I might give this atrocity a chance :

That way I can use the Leg Reaper too. It’s so terrible it might just work.

So excited! I was killing the Hodunks in hopes of getting a better Slagga(I know I don’t need an updated Slagga, a low level one does what I have it for well enough, but I figured an updated one for that little bit more damage would be a good thing) and I did get a level 70 Slagga(Can’t use it just yet, I’m like a bar away from 70)

So that’ll be nice for when I gain a little bit more xp. But the reason I’m posting this is, when I move towards the Bandit camp right next to where the Hodunks spawn, some Spiderants spawn before I get there and there’s a Tubby! This dropped.

I just need to take the 1 point out of FM and put it into UF, and I’ll be set! For now anyway. Still working on leveling and upgrading my bad guns, but this is a good first step! I might even post again because this session isn’t done yet, I just got excited when the Legendary Anarchist dropped and had to come here

I hadn’t used my Vladof Rocketeer for a while, so I dusted it off… fun to use!

Barry Sloth reached Sanctuary, and then did the introductory missions with Zed, Marcus and Tannis. After that he went and did The Name Game, during which the first trolling of the character happened. 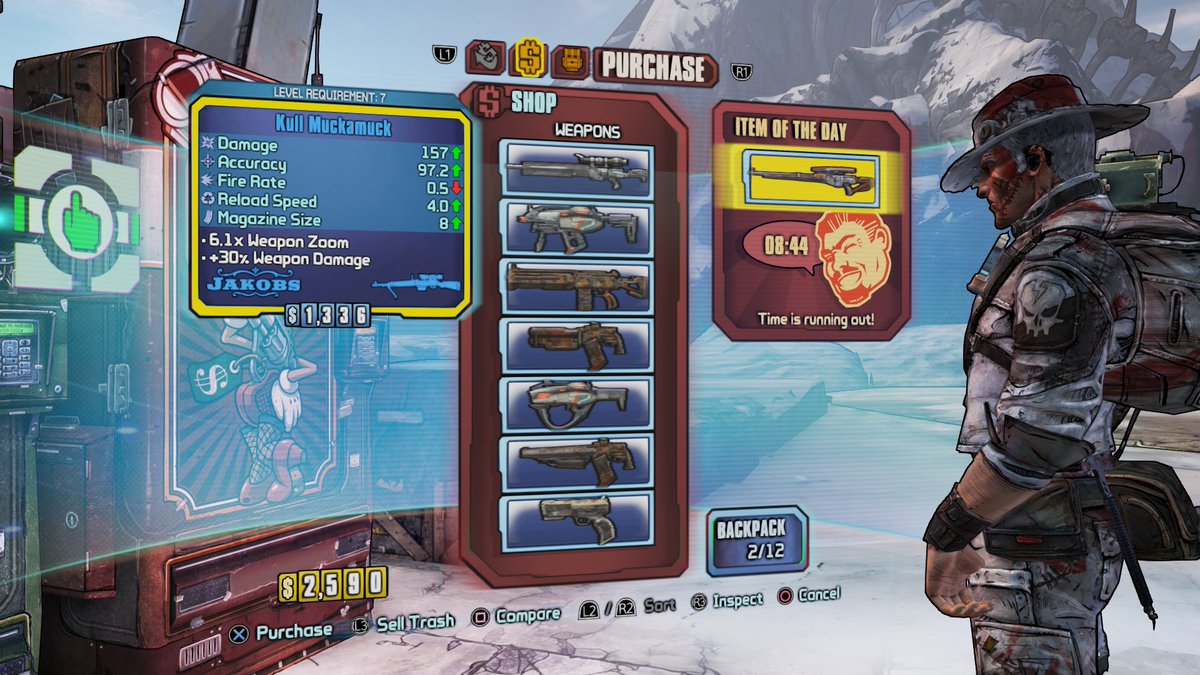 Can’t use it, obviously, because blue rarity… of course I get it on the character who can’t!! Anyway, as a consolation, a Bullymong dropped me this. 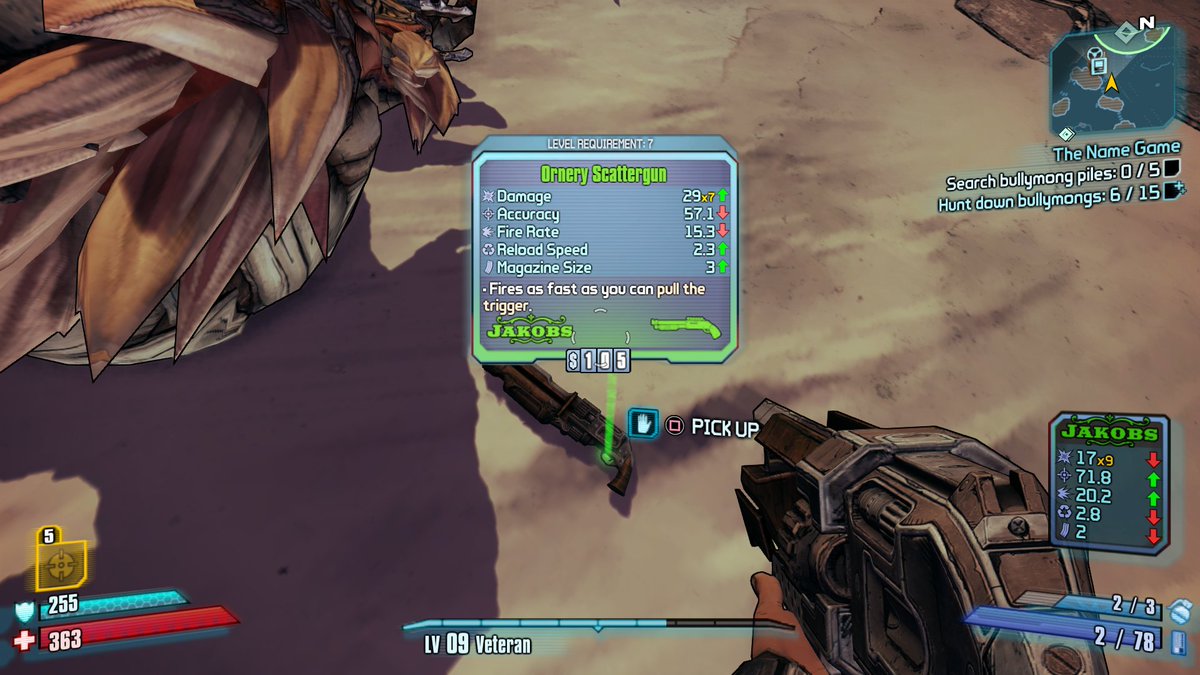 My Vladof Sal initially was just going to dual-wield Vladof snipers at first (I wanted Molokos, but soon went with Lyudas because they’re obviously easier to round up.) Then I decided to make him a full Vladof allegiance dude (keeping the dual-sniper element though) which has turned out to be a lot of fun.

The only bit o’ gear missing for him was a corrosive Lyuda and I’ve been farming without success for about a billion years now (though it’s given me the side benefit of upgrading his other ones for better-parts replacements.)

I had dumped most of my good and rare Vladof gear on him, gathered from other characters, including a small collection of Shredifiers. On a whim I replaced the main-hand Lyudas with fire and corrosive Shredifiers, and keeping the slag Lyudas in the off-hand. Kind of a weird setup but holy hell it tears through things once all the bonuses like NKLO and Keep Firing start kicking in. I’d never given Shredifiers much of a thought before this but now I’m sold, at least in this setup.

I want to go through the story with him with this so I’m probably gonna reset him tonight after I get home.

Have been in a strange mood today, not sticking to any one thing for very long. I did however take my Xbox Zer0 to OP1. 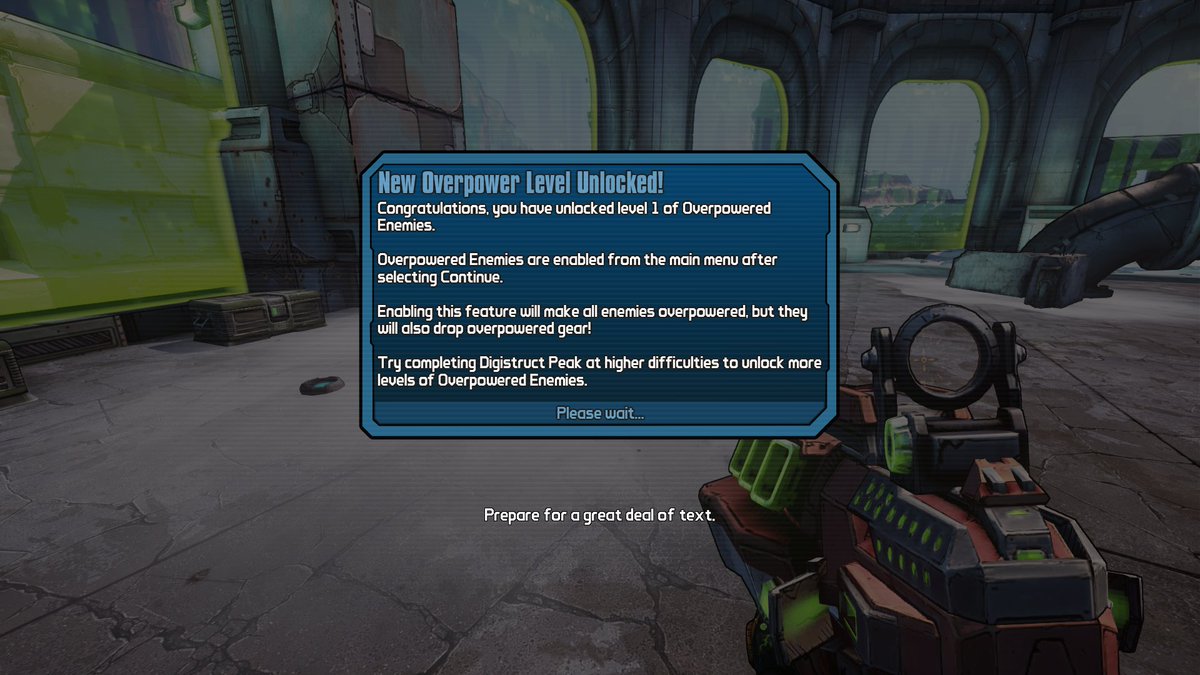 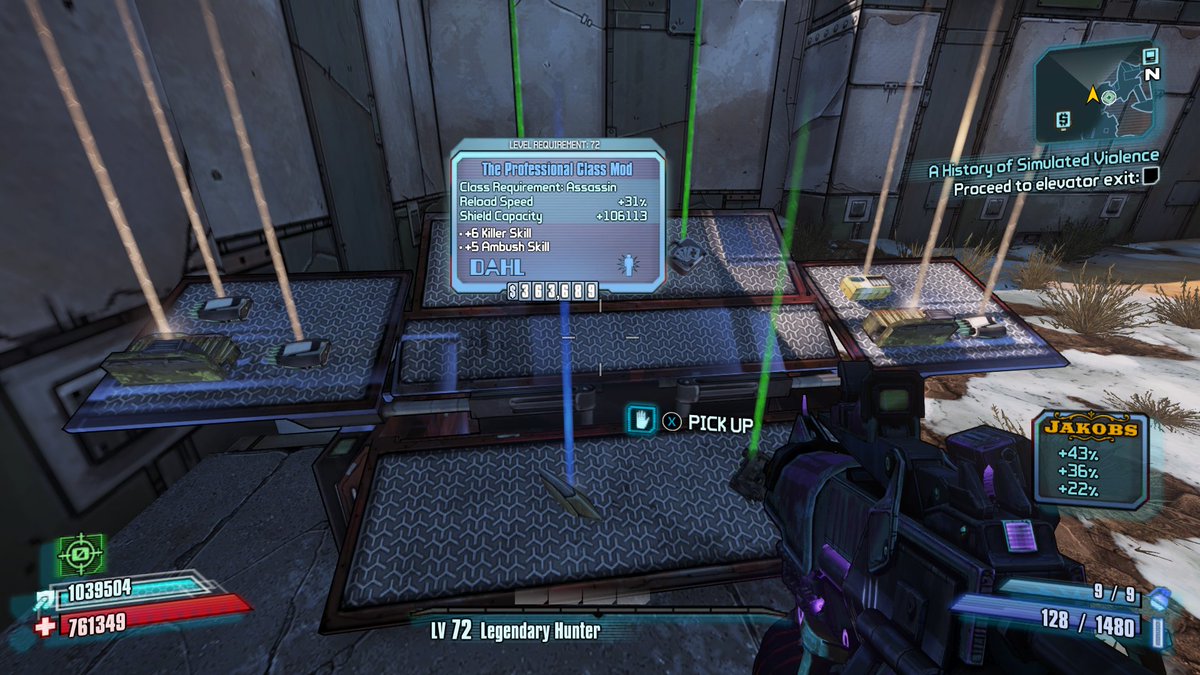 That’s the only decent piece of gear I got on the run.

I continued my Maya push through UVHM and got past Bloodwing, and then helped out Hammerlock with Slappy. Decided to farm him for a bit and got a Hunter Striker. I headed over see Tina and helped her out with Madame Von Bartlesby, and tried farming her a bit, and nothing dropped.

I then unlocked Thousand Cuts and stopped my progress there. I dropped down to normal mode with her, and finally saw the Double Rainbow’s (thanks to the other thread for pointing it out). I figured I was so close to Henry, that I started farming him again for skins. I finally got Maya and Gaige (neither one I was farming for), but it’s a start. Henry did drop 6 cradle shields 16, 17, 18 and 19, and then some dup’s. I currently don’t have any characters that low to use them, so off to the bank they go for a future run.

I love a good Sand Honk, myself…

Psycho Naut continued the quest for crumpets through the forest, found suitable attire for a town guard (who may or may not have taken an arrow to the knee), and pushed on through the Immortal Woods to the Dwarven Mines.

Anyone else find it annoying that you can second wind off pushing BW from one phase to the next, but you can’t second wind from knocking one of the four kings heads off? Or rendering a skeletaur helpless?

Anyway, the upgraded arsenal (slag Lyudmila, Volcano, Ogre, and other odds and ends) made short work of pretty much everything else. Also discovered that if you happen to be in full rampage mode when a skeletal mage appears, one thrown axe will stun it long enough to kill it with a second, so that was fun.

Called it a day once I’d hit the mines. Lots of eridium and blue and purple gear, but nothing that really stood out.

A few days ago some of us were discussing the fun of getting a God-liath, well I just took Maya for a Dust run, and I got this little fella… 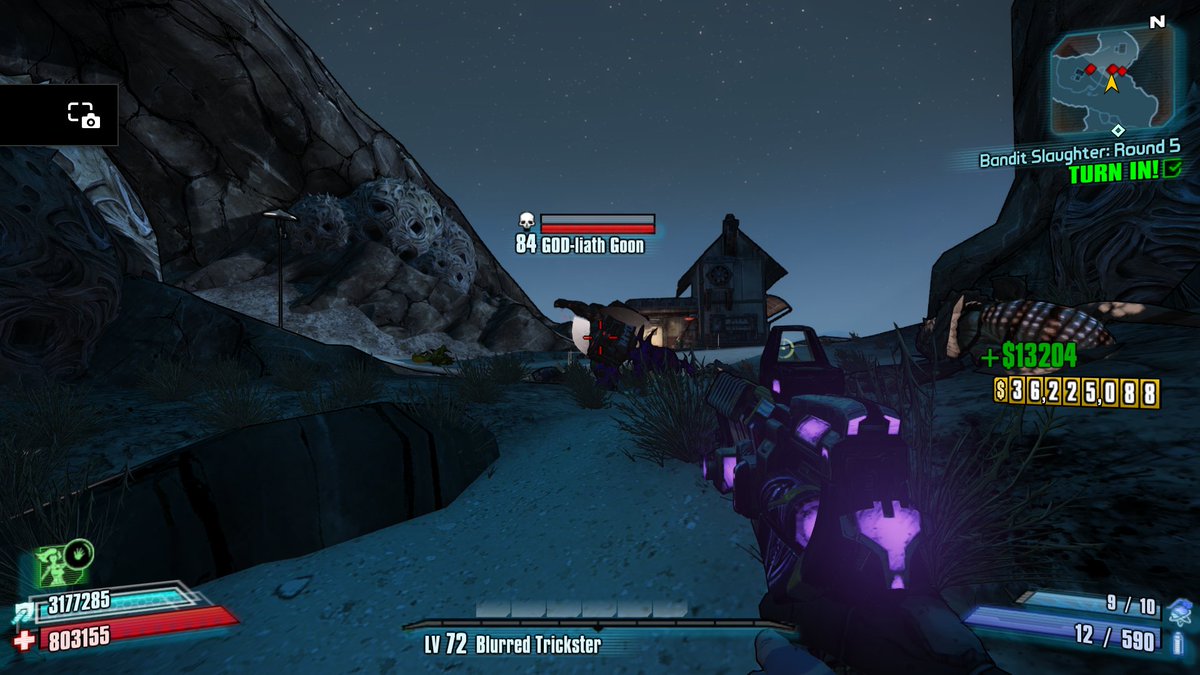 Managed to get him to kill Mobley and Gettle (although cloud kill might have finished Gettle off), before I had to put him down. It was fun, buddy, really fun. RIP

Did he have anything good in the chest?

just some green crap. Mobley dropped a bad Veruc though.

So, business as usual then…