What kind of Gameplay?

i saw the trailer and was following the Shipbreakers developing during the last year. i really like the look of the game, it has the kind of homeworld artdesign we all love so much.

now that DoK will be released in 1 month, i still dont know little about gameplay. how do this game feel like?

Let’s hope they can say something! But BBI might not be on the GBX forums…

I wonder why they are hiding this game, not a single gameplay video so far, no press build for gaming sites, nothing…

We’re working on a bunch more stuff with the crew over at Blackbird. Just hang in there

I dont work for gearbox but ill try and help you with your questions. but first ill ask, where did you hear that the game only has 13 missions? seems a bit low considering homeworld 1 had 16 homeworld 2 had 15 and homeworld cataclysm had 17

but for your questions…
1 . We see a couple fairly large ground bases in game, though i dont think you can build them as it goes against the ‘mobile bases’ aspect of the classic homeworlds

though i would absolutely love if we could build static buildings and bases like in other more conventional RTS games [CnC, Starcraft, Sup Com, Act of War ect ect…]

Heres two screenshots for what i think might be the same base, likely a large military outpost. The buildings are clearly capable of constructing and or tending to fairly sizeable vehicles since they have two “Destroyers” docked inside. 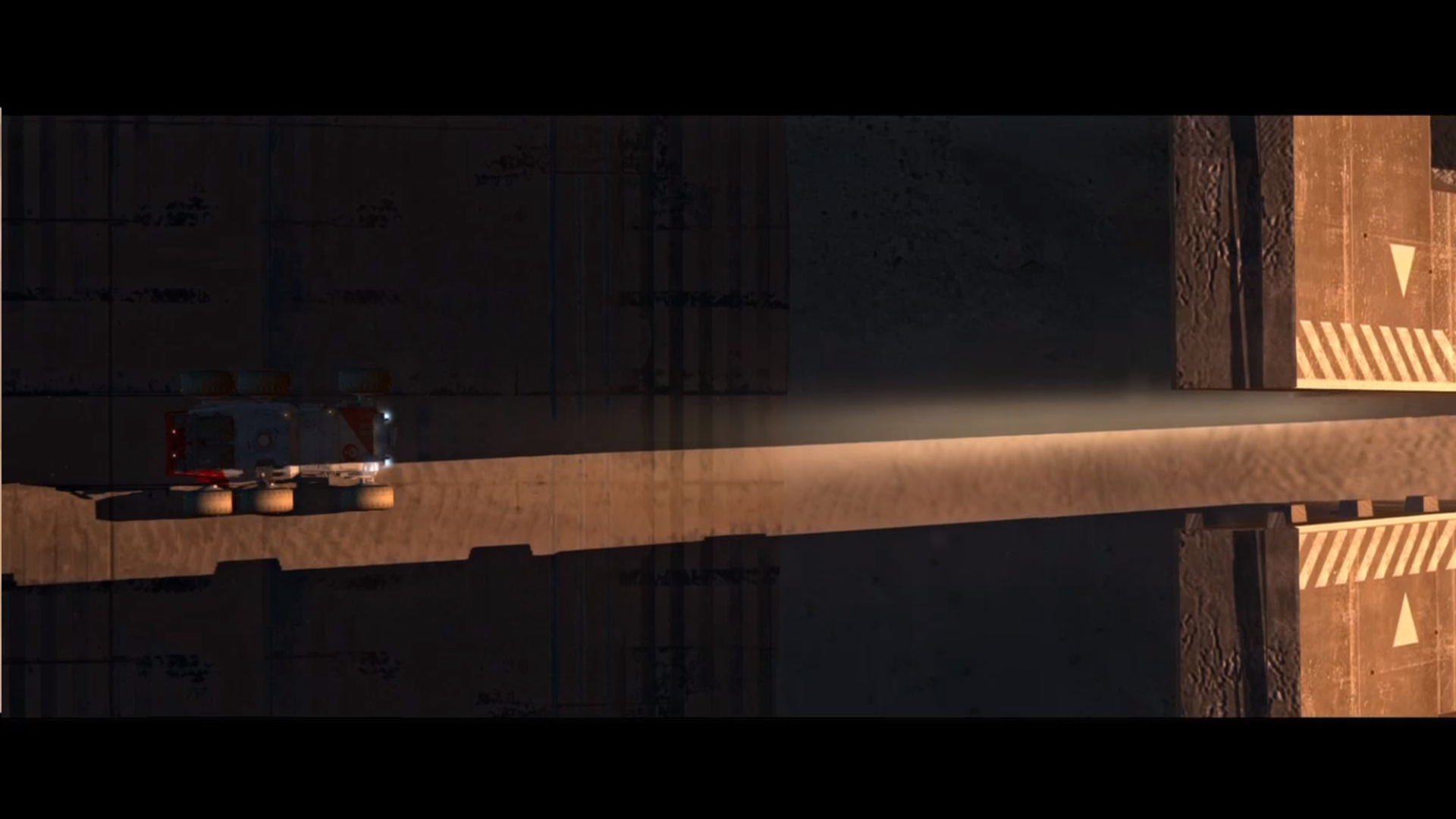 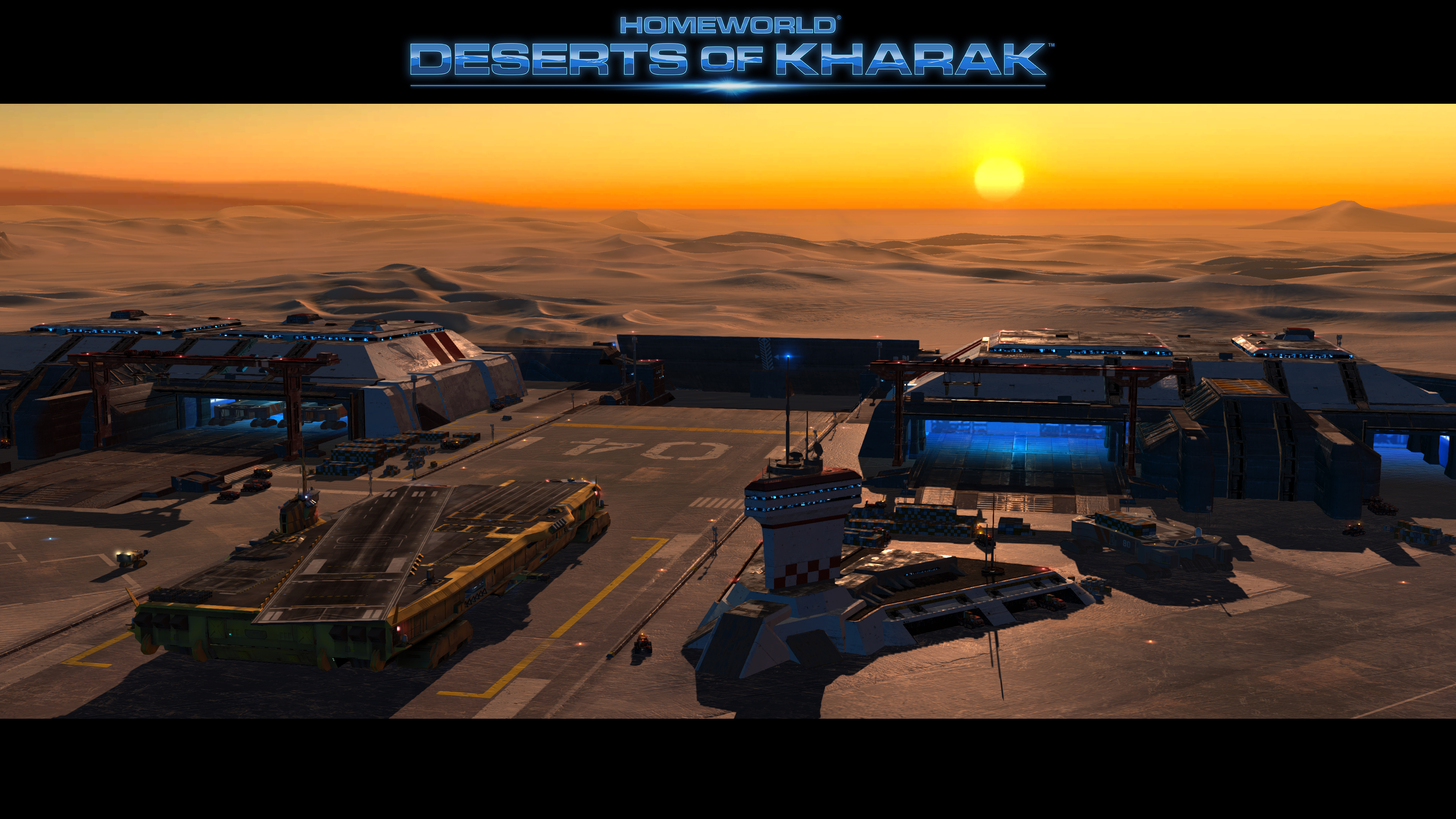 Heres another screenshot of a place i believe is called ‘the boneyard’ [and is the first mission of the game perhaps] this has a sizeable ‘shipyard’ in it which would be interesting i you could build.

2 . There looks like a fair veriaty of units for the two factions. as for squadrons it seems like all units come by themselves and not in squadrons. I’m basing that theory on the below picture of the strategic screen which shows a number of cars with there own icons and no indication of them being in a squadron of some kind 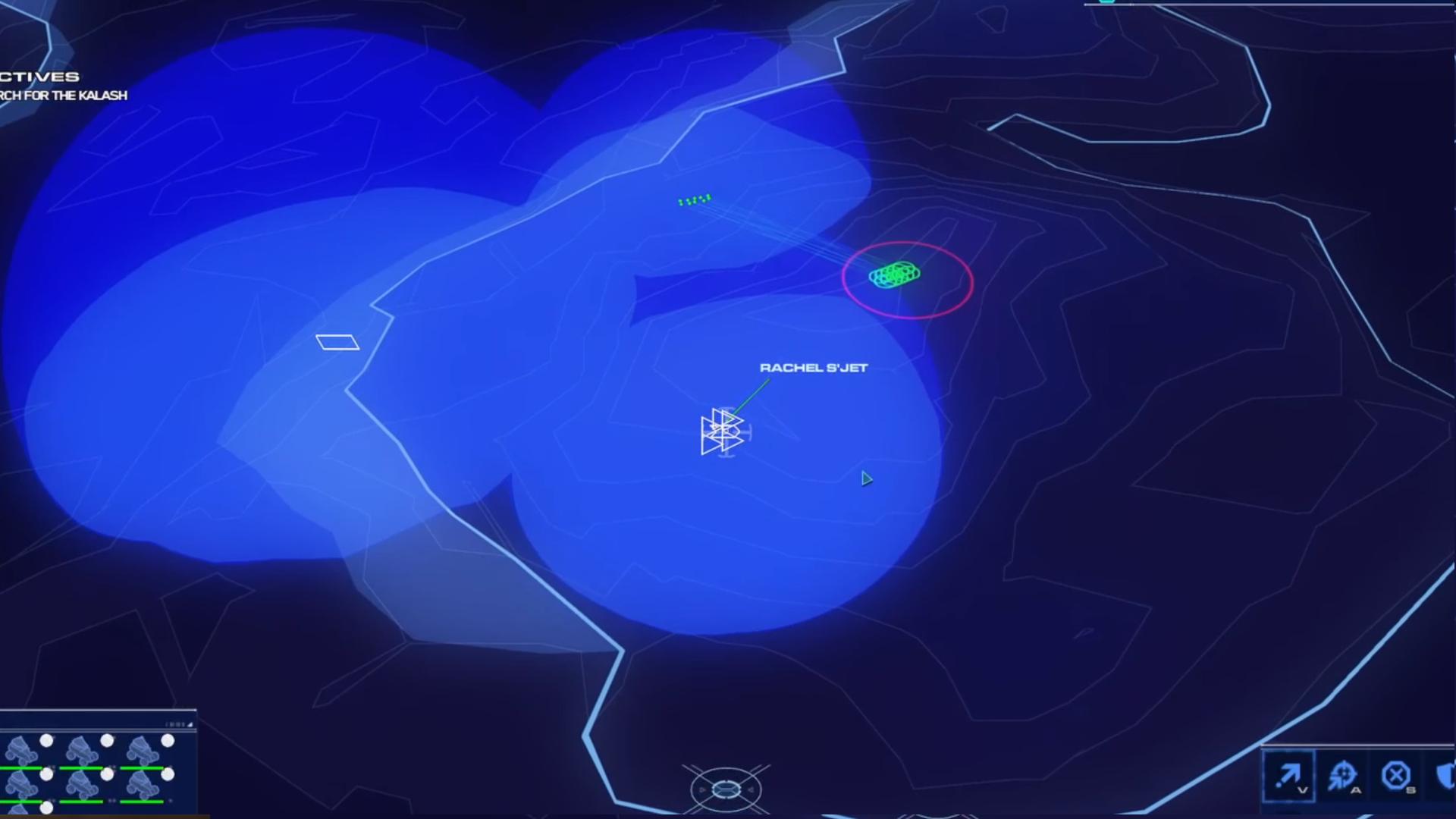 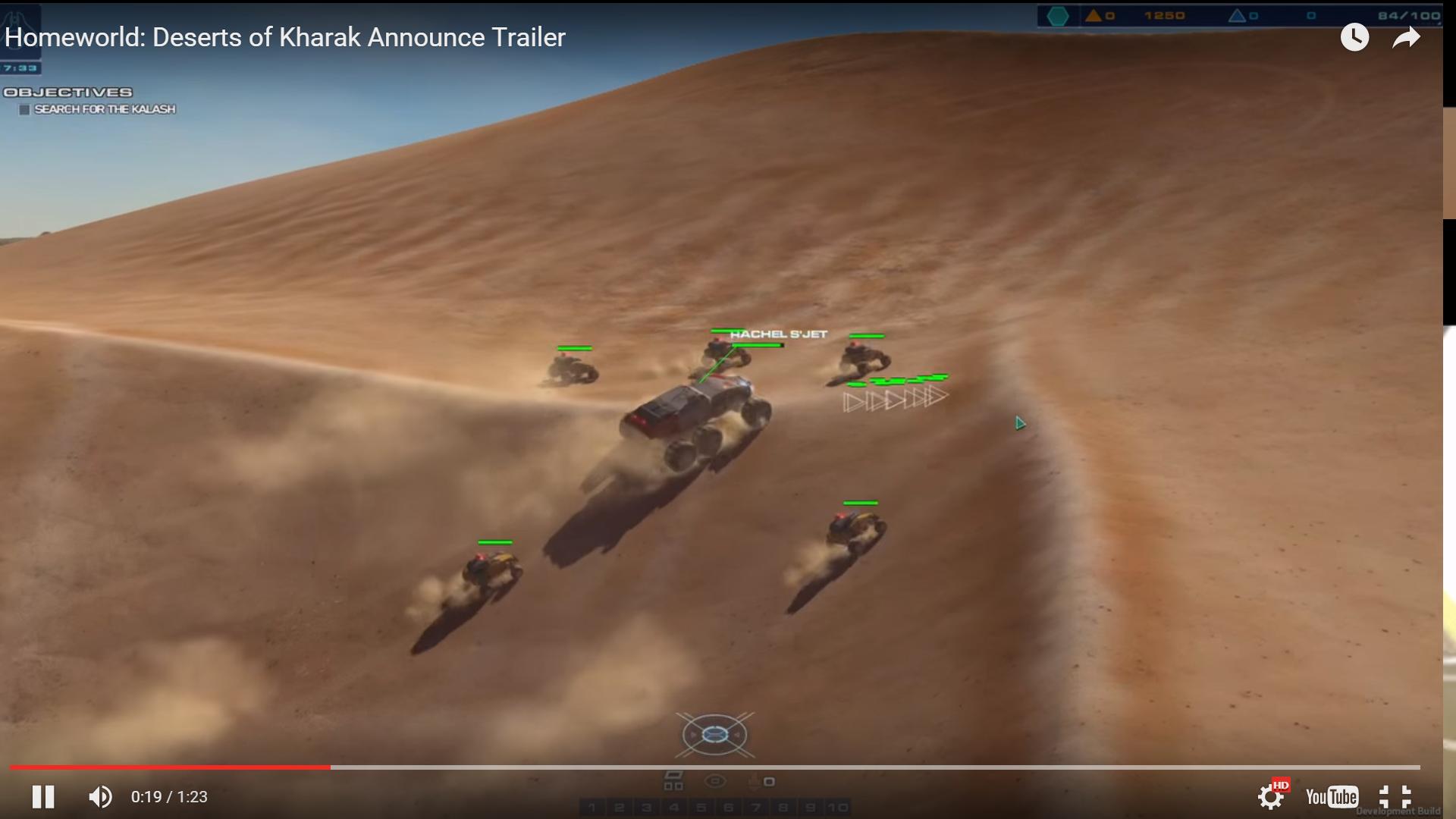 there is also an image of a small aircraft landed ontop of a baserunner further suggesting that units are built alone.

3 . The maps look pretty big and heres a picture of the strategic view

4 . The scale of the game seems fairly average for conventional RTS’s, your unit cap also seems to change as the game goes on 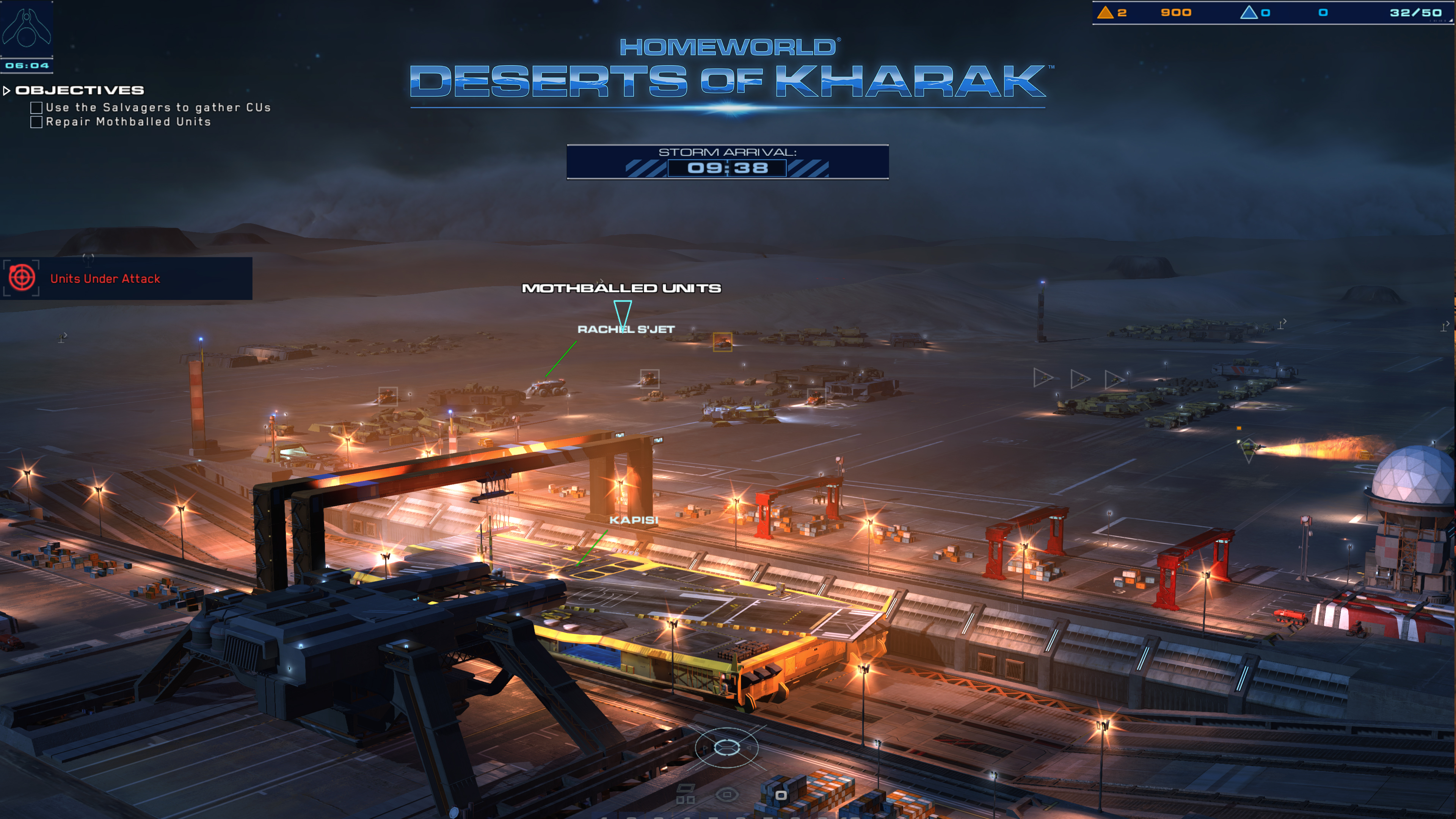 [ Heres a picture from what i believe is the first mission, it shows a unit cap of 50, this is quite low but i do believe it will be expanded as the game goes on some how and this is some what supported by the pic below]

[ This picture shows us having a unit cap of 100. This suggests that the Unit cap will increase as we go on throughout the campaign. I imagine that the game will include some sort of supply upgrade or vehicle like those that were in Homeworld Cataclysm which will allow us to increase our population ]

As for my own gameplay questions i have

Just hang in there

I actually haven’t personally been out there.

But you can ask them over at http://forums.blackbirdinteractive.com/… maybe they’ll share some pics!

Didnt even know they had a forum, thanks for the link

They should use Discourse…

Here’s a message on modding from over on the BBI forums:

[quote]Stoked that this is one of the first questions to come up! We are in support of modders and people experimenting with our game to make it their own. We believe this is better for the community and better for us - full stop. Many of our developers (Myself included) got their starts in mod communities.

We won’t be putting up any legal or code based blocks for modding. We will, however, attempt to protect the game if a mod infringes on the integrity of our game. An exhaustive list of what this means is largely impossible due to the nature of modding - but we don’t want players sporting map hacks in games where other players don’t have the same content - for example.

We can offer more details on this, guidance on how our game is structured and additional engineering insights, as we get closer to release![/quote]

Ballistics or RNG? This is all I wish to know before buying, thanks.

13 missions is the info, written in different online-magazines articles.

and size of the blue minimap:

in the trailer, it looks like a “world” minimap, something like C&C - so cutscenes like. the minimap according to the map looked like normal size, but then im not sure if this minimalistic minimap (which was perfect for homeworld) is the right stuff for a 2d- dessert map, maybe its just for the homeworld optics and the right “feel”?

The only thing, that can make this game unique and different from other ground-based RTS - it’s a free map (the whole available planet for player, completely!) I think, if it is not implemented, then it’s a big omission for this game…
I would also like to see running out of fuel and refueling units

Lol its mickey, the game is not even out and he is complaining again lol

Lol its mickey, the game is not even out and he is complaining again lol

And you just watch for me;) No, I’m not complaining, I think the this game will is not bad. However, personally, I’m tired of the limitations of standard RTS games. Every year out thousands of games that do not differ in their limited gameplay.
All ground RTS always and always are limited in the size of the own maps. Developers of games for a long time it is time to make the strategy in which, will be available to the all planet as map. Like As we can see in the google map.That’s when a new game could be set aside on the background of the standard RTS games!