What the hell is wrong with my game?

DISCLAIMER: Yes, I have already submitted a ticket to support. Still waiting to hear back.

So I decided to jump on after taking a week long break and see what was going on with the Lootpocalypse and to my surprise found I had a stack of coins to throw at faction packs for skins and taunts. Pretty neat, hey.

Problem is, the reason I had to take a break is still very apparent. Error message after error message after error message. It has been like this since the very first minute of launch. 9 out of 10 missions I complete kick me to the title screen when I get an error message because it can’t load the match history. 9 out of 10 pvp matches I get disconnected when the game tries to connect to the server, or kicked to the title screen post match because it can’t load the match history; both scenarios kick me from the psn party that I’m playing with in those cases too (the few people I’ve managed to play with can vouch for that lol). If I played a drinking game for every error message I would be sueing GBX for a liver transplant by now lol.

I don’t think I can keep laughing this off anymore. It’s a bad joke told one too many times. I paid $125aud for this game, and I don’t think it’s too much to ask for it to, I dunno… work??

I really don’t want to miss out on playing new maps, characters, and dlc missions (especially when I’ve already paid for the season pass content) because this game stays an unplayable buggy mess.

This may be an obvious thing, but have you tried uninstalling and reinstalling? Past that I’m clueless lol

Oh my goodness, watching that video is painful!

I know you have already tried uninstalling and reinstalling too… You seem to have one really buggy version of BB that’s for sure.

I have a physical copy, and while I deal with lag on occasion, I am yet to experience anything quite as bad as your experiences (posted here, and also in the Australian Servers Issues thread).

I assume it’s the game, and not an Internet connection thing, or the amount of room you may have taken up on your PS4?.. I’m no tech person.

Hopefully @JoeKGBX will see this, and have a solution or suggestion for you (besides the already mentioned support ticket), though I’m not sure if there is anything he could do?

I have mucho respect for you, for your continous trails and tribulations, and still attempting to play!

Third option: google is your friend.

I found these after about 5 seconds of looking, 10 seconds of scanning to make sure they had anything useful. You can probably find more applicable stuff with specific error messages.

Follow our tutorial to fix your Battleborn errors, with our workarounds you can fix Crashes, FPS Issues, Connectivity bugs and other game issues. 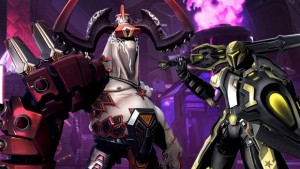 A few tech tips for Battleborn.

Uninstalled and deleted all content on the console, downloaded and reinstalled. Reset my router, bought a new router, connected via WiFi, connected via ethernet, tried playing when there’s no other Internet usage in the house, tried playing drunk, performed an exorcism… you name it! Lol. My only conclusion is that I just got a horribly buggy version and I don’t know why or how that could even happen

My favourite is when I sometimes try to sprint and I go into this state of like character frame-skipping during public matches/missions, which has just become a normal part of my expected Australian player experience. I know if I stop sprinting and move slowly for a few seconds it generally fixes it allowing me to sprint again.

I’ve only been doing PvE for the last week though thanks to the Lootpocalypse.

Other than that and the constant red bar in every single public match, I haven’t had any major issues and certainly not at your level. Wow

I wouldn’t mind credits popping into my wallet out of thin air though!!

Yeah I get the skipping animation too. I can understand red/yellow bar lag in pvp or even pug pve, but I manage to get it in pve missions playing private solo. How does the game not automatically assign me to the Australian/oceanic servers??

I could honestly play with the lag we aussies have had to just get used to, but to have these problems constantly on top of that is a bloody nightmare

Yes I can vouch for this. Every game you get booted and have to rejoin. I’m not sure why the game hates you so much, you seem like a nice guy. Maybe it’s something you done in a past life?

I have been having similar problems since the revert back to original matchmaking, didn’t have a problem when casual and competitive queues were up.

My guess is the change brought players back, and the servers are struggling, because I get one server error after another and am constantly getting kicked again.

Have you tried deleting the game data and reinstalling? If there was a “hickup” during download or install, it can cause issues like the ones you’re describing.

Edit:
Never mind, I see that has already been brought up.

A separate question though, what kind of network connection are you using & what is your NAT type listed as when you test it?

Here’s one of my favorite reoccurring experiences playing PVE solo…

Never ceases to put a uncomfortable smile on my face…

Usually WiFi as the wall port is at the other end of the house, but I have tried connecting via ethernet and it didn’t make a difference. NAT Type 2

Can you put your PS4 in the DMZ (Type 1) using router settings?

Voucher right here.
Voucher? That’s it, give this man a voucher so he can buy a new copy of Battleborn
Lol nah but seriously this frequently happens to us Australian players, but what is being displayed here is the pinnacle of frustration, I’d have murdered my family by now.

I have mucho respect for you, for your continous trails and tribulations, and still attempting to play!

Agreed, this only happens infrequently to me and even then it pisses me off lol, but were it to this extent I think I’d have given up and pulled a Forrest Gump by now. Kudos!

This one’s a classic, I’ve figured out this trick too but it doesn’t help when you’re being chased and all you’re doing is rubber-banding on the spot lol

The absolute best though is using Phoebe, when you True Strike and the game slingshots you back to where you started lol, I’ve learned to compensate but it’s not enjoyable. Deande’s Burst Dash is a close second, argh it’s so hard to hit a moving target with!

@lowlines many of us who have commented here frequently play together in the pursuit of green bar, in a full party we get it occasionally but usually we destroy the enemy and they rage quit or surrender at the earliest possible opportunity

We go get all green bars in Japanese lobbies though, it’s the only way to really test ourselves on a level playing field. Japanese teams are insane though, always full meta but they often surrender if they haven’t won in the first 10 minutes, even if they’re winning. Weird…
Anyway, feel free to add us and join the hunt for green bars! There’s usually a lot of us on at once so we split off into separate groups, but I’ll try get you into the main group some time so we can get a full Aussie party going. I remember when we got @Ryballs his first green bar, he was so happy :’)
Seriously though, us Aussies are good, like really REALLY good, give us green bars and we wreck teams far worse than we get wrecked with red bar more often than not, we’re accustomed to lag by now so much so that we miss our shots with green bar connection LOL.

You might need to manually forward some specific ports on your router.

Can you put your PS4 in the DMZ (Type 1) using router settings?

I don’t know how to do that lol. I do know that my NAT Type has been known to flicker between type 1, type 2, and unknown; but it’s type 2 90% of the time. I haven’t had any improvements when I’ve had type 1 and unknown shows up when the internet is on the fritz.

You might need to manually forward some specific ports on your router.

I tried to Google how to do that, and I think I confused myself even more haha. I’m still far from convinced this problem is on my end as no other online game has ever given me any issues at all. This is a very specifically battleborn problem.

Yeah, port forwarding can be pretty “scary” at first. I believe you that it’s a BB specific issue. The reason I suggested it is that BB seems to be pretty fickle with NAT types (like randomly saying mine is strict when it’s open…). I’m not an IT person, but from what I understand, port-forwarding can help with NAT issues. Figured it’d be worth a shot if nothing else. I’d assume in your case that you’d wanna go to the PSN support site and see if there are any specific ports they recommend forwarding in general.

Also, if anyone knows more about this than me and/or I’m completely off base, please feel free to let me know.

Guys I am playing from the UK, so the most issues I encounter are strict Nat problems, but resetting my console generally solves this.

I just wanted to praise you guys sticking with this awesome game, through all the lag, server issues and weird possessed copies of battleborn

Once all this gets sorted, I would quite happily be trounced by your Aussie super teams

Keep soldiering on guys, you are obviously sane and mentally stable, though how long that lasts is anyones guess…

I’ll definitely do some more reading into it and see if I can get my head around it all, so thanks for at least giving me another option to try anyway; it’s appreciated. I’ll check out the psn support website too