Working on a Money/Cryo themed build for Zane; need suggestions

So, without spoiling too much, I’m basically trying to run a cryo build for boyo.

I’ve got a Predatory Lending and Cheddar Shredder already, but need some suggestions for good Cryo weapons. Tried the Frozen Devil, disappointingly awful. Was going to try Ice Queen, but no anointment.

Use a ice breaker artifact (kind of a no-brainer)

there is no such thing as cryo build

I’ve obtained an Ice Breaker from the quest “Of blood and beans” in dlc3 and I find it surprisingly effective at a short range. Mine has cryo ASE. 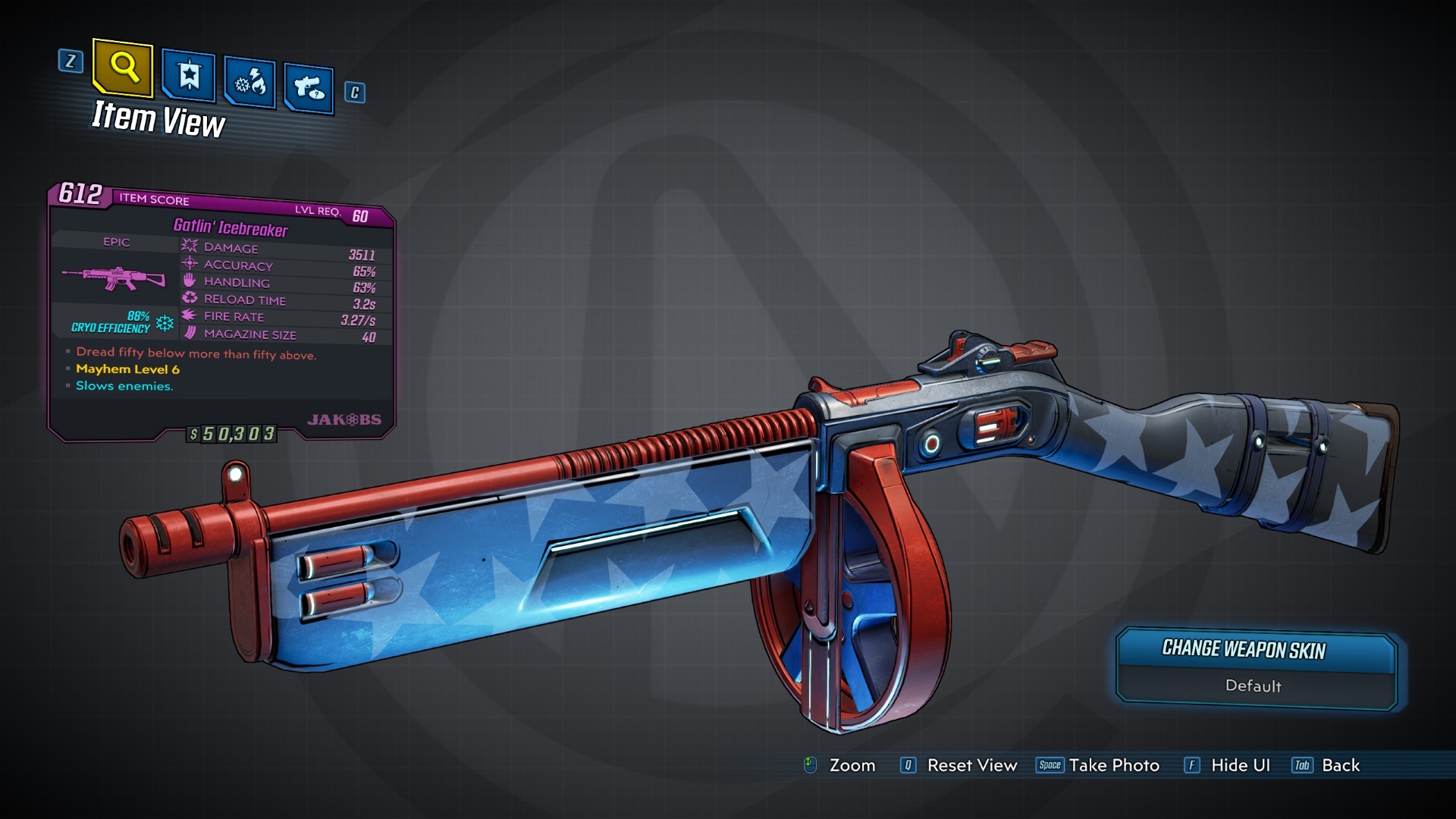 For the common artifact, see Ice Breaker. Icebreaker is a unique assault rifle in Borderlands 3 manufactured by Jakobs, and is exclusive to the Bounty of Blood DLC for Borderlands 3. It is received as a reward for completing the Of Blood and Beans...

I’ll have to check out more videos, the one I saw wasn’t too happy with it.

Is masher ever worth it? From what I can tell they typically balance it in such a way that you do the same damage or less per bullet consumed.

Hydrafrost was pretty good when DLC2 came out, don’t know if it still is. Mantis + Frozen Heart ASA is pretty broken (plus the life steal means you may not need to spec in Salvation). Kaos, Plaguebearer, Recurring Hex (+ Revengenader ASA) are probably all good too. Perk of the Hydrafrost is the amp shots would give you some effectiveness against health/shields (unless you wanted to go with next 2 mags anointment).

And the ricochet makes it even better haha

For bossing, it depends on what boss. I use it for MTT and only switch to storm and craps for the boss stages (and clairvoyance for the mobs again)

Before I used to run with a Maggie which worked about the same haha.

@SuprSaiyanRockr In my opinion the masher variants are the most fun to use out of the Jakobs ARs. The Clairvoyance masher in particular is really cool.

How effective the masher ARs can be depends on your character. I play Fl4k, and they have some synergies that make mashers an especially good option (Megavore). On Moze though, I prefer a single pellet Gatlin prefix for Jakobs ARs.

You really need a mag size passive on your artifact if you want to use a masher AR, because the ammo goes quickly.

You really need a mag size passive on your artifact if you want to use a masher AR, because the ammo goes quickly

Oh I forgot to add that my classmods has jakobs, jakobs crit and AR damage bonuses

Most (all?) of Zane’s cryo-based skills are down the Under Cover (green) tree, so you may as well rock a Barrier as part of your build, as you’ll have access to all the related augments.

Specifically, points in Brain Freeze makes it easy to freeze enemies regardless of using a cryo weapon or no (critting with cryo weapons makes freezing that much faster though), and Calm Cool Collected turns these freezes into huge bonuses for Zane (in order: shield fill, health fill, and then full action skill cooldown and reset).

Because you’re hiding behind the Barrier and not taking damage, your shields and health will be full, so a freeze will refill your Barrier meter (and whatever else you’re rocking - dealer’s choice here). If you can make a stand behind the Barrier, shoot and freeze one enemy, damage them a bit more, and switch to another so you can keep the freezes up (there’s a little cooldown between freezing the same enemy a second time). You can keep your Barrier (and whatever other action skill you like) up indefinitely this way, short of them being destroyed.

For weapons, it’s still almost up to you… there are plenty of good cryo weapons capable of freezing enemies to get these skills lit… it might be better to tell us what your preferred playstyle is than throw a list of several dozen guns that are good at cryo.

Frozen Heart or Snowshoe with shield activation anoint is gonna be better at freezing stuff than any cryo weapon you can use. Might as well still use a cryo gun, of course, if you want, but with Zane’s slow-on-crit skill, the element might not even matter, high fire-rate might be all you need.

Again, depends on character. I am a dummy and so I didn’t realize this was a Zane thread because I can’t read good.

On Zane the single pellet Gatlin prefix probably is best due to Playing Dirty, weapon damage, and fire rate boosts. On a clone build you might prefer the masher variant though.

I like a single pellet version with Amara, highest damage possible. But again, all this is personal preference I guess.

That’s what I love about the clairvoyance

It almost turns into a whole other weapon. And also why I find it a shame that the gun balance and scaling is so atrocious in this game

Clairvoyance is probably my single favorite weapon in BL3.

I allways was a jakobs fan, but the clairvoyance is my No.1 gun

@garfield1283 Not to make this too Jakobs lovey-dovey, but I have always loved mah Jakobs, and the Skullmasher, Clairvoyance, and Maggie all are top tier for most of the VHs right now, and I love it. The Skullmasher especially is amazing right now.

I hope the wedding invitation will come back with valentine

If it does, I’ll come back to the game just to farm it again

I had a friend send me a level 65, M10 Wedding Invitation and I am going to have to break it to you that it sucks after they patched out extra projectiles.

The base damage would need to be at least doubled to make it useful in M10.