You thought Galilea couldn't be more OP, and suddenly you see her legendary gear 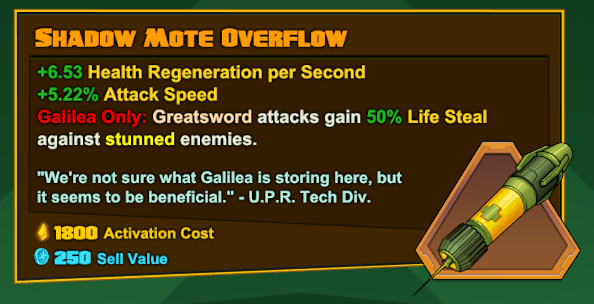 So it should be. Legendary gear is supposed to be good. That’s why it costs 1800 shards. I think the bigger problem is some legendaries aren’t worth it.

These “worth it” legendaries are way too powerful in my opinion and change how balanced PVP can be.
But you’re right, I saw some other “character related legendary gears” and some are really poop.

Although I wonder if these legendary gears have fix stats.
It seems weird to me that an item would have 5.22% attack speed and not 5%, and if they are random, that would be really weird… considering you can have them only once (or maybe i’m wrong on that point)

They’re supposed to be fixed to the stat caps for that ‘slot’ but it is/was bugged so that it didn’t, I’m not sure if they’ve partially fixed it for new gear or what (my Whiskey item is capped) but yeah.

FYI: Caps for this would be 7 health per second and 5.6 attack speed on a ‘perfect’ roll. Funnily enough, this gives it properties more akin to a jennerit item than a UPR one, though that’s often the case for legendaries. (Phoebe has a unique pair of shoes for crying out loud, and the LLC don’t even make shoes.)

Wow, that’s damn powerful. I thought I heard alot about this game and it’s gear not affecting competitive PVP modes and just being a slight boost?

This is hardly “slight”

All gears are more than “tiny” boost, and legendaries are already a huge boost. But these are “character specific” legendary, and some are crazy OP (like this one in my opinion)

(Phoebe has a unique pair of shoes for crying out loud, and the LLC don’t even make shoes.)

You can’t be cool enough without these.

I think you’re slightly overestimating the value of 50% lifesteal for 2 seconds. Especially since she can’t benefit from it while Dangerous to Go Alone is up, which is MOST of why Gal’s damage is obscene anyway.

Does it swing a brawl to her favor? Well duh, she’s supposed to be one of the best brawl characters in the game, intentionally. People think she’s op because they’re trying to out power her instead of out fighting her. Bring a friend, use some CC, harass her from range because she has no response to that at all. Like, Boldur can sprint full speed into a hail of gunfire with his shield up and HEAL FROM IT, and no one bats an eye. Galilea has no gap closer and deals really good damage for it and everyone loses their minds. I’m amazed people don’t complain about Rath, because he’s almost entirely onpar with Gal, just more damage for less raw durability. He still has the stun, the silence, the healing, the massive AoE, and hits SUBSTANTIALLY harder.

if only that were true. So many legendary items are awful, even lore ones.

Especially lore ones lol. I’d say around half of them need buffing.

The LLC doesn’t make shoes because of the fact that one of their negative traits is -movement speed. Same reason why Eldrid don’t make shield stuff, and why Jennerit don’t make shoulder guards.